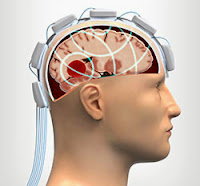 The results from the initial clinical studies involving the microwave helmet Strokefinder confirm the usefulness of microwaves for rapid and accurate diagnosis of stroke patients. This is shown in a scientific article just published. Strokefinder enables earlier diagnosis than current methods, which improves the possibility to counteract brain damage.

In the article, researchers from Chalmers University of Technology, Sahlgrenska Academy and Sahlgrenska University Hospital present results from the initial patient studies completed last year. The study included 45 patients, and the results show that the technique can with great certainty differentiate bleeding strokes from clot-induced strokes in patients with acute symptoms.

Strokefinder is placed on the patient’s head where it examines the brain tissue by using microwaves. The signals are interpreted by the system to determine if the stroke is caused by a blood clot or bleeding.

“The results of this study show that we will be able to increase the number of stroke patients who receive optimal treatment when the instrument makes a diagnosis already in the ambulance,” says Mikael Persson, professor of biomedical engineering at Chalmers University of Technology. “The possibility to rule out bleeding already in the ambulance is a major achievement that will be of great benefit in acute stroke care. Equally exciting is the potential application in trauma care.”

Diagnosis and treatment already in the ambulance

The initial patient studies have been performed inside hospitals, and this autumn the research groups at Chalmers and Sahlgrenska Academy will test a mobile stroke helmet on patients in ambulances.

“Our goal with Strokefinder is to diagnose and initiate treatment of stroke patients already in the ambulance,” says Mikael Elam, professor of clinical neurophysiology at Sahlgrenska University Hospital. “Since time is a critical factor for stroke treatment, the use of the instrument leads to patients suffering less extensive injury. This in turn can shorten the length of stay at hospitals and reduce the need for rehabilitation, thus providing a number of other positive consequences for both the patient and the health care system.”

A new product, based on the results of the present study, has been developed, and further studies will be conducted in several countries in preparation for the CE approval that Medfield Diagnostics, a spin-off from Chalmers, expects to obtain later this year.

Two different prototypes have been tested on 45 stroke patients who arrived to the hospital. The patients were stable after receiving their initial assessment/treatment. The study results show that the system can distinguish clots from bleeding, and also distinguish patients with bleeding from healthy subjects. The system is self-learning, which will result in additional patient studies further minimizing the risk of misdiagnosis and increasing patient benefit. Therefore, more clinical trials have been underway at Sahlgrenska University Hospital and the Södra Älvsborg Hospital in Borås for one year. Before the system can be used routinely for diagnosis in ambulances, larger comparative studies with computed tomography must be conducted.

Approximately 15 million people in the world suffer from a stroke each year – a condition in which a portion of the patient’s brain cells are damaged due to oxygen deprivation. During an acute stroke, millions of brain cells die every minute, and many patients can be saved and live a better life if treatment is given quickly.

Here healthcare faces a great challenge. Stroke can be caused either by bleeding or a clot in any of the cerebral blood vessels. On the basis of the patient’s external symptoms, there is no way to determine which type of stroke has occurred, and consequently treatment cannot be initiated until the diagnosis has been established. This is currently done using a CT scan (computed tomography) in hospitals.

The vast majority of patients suffer from blood clots and could successfully be treated with clot-dissolving medicine, thrombolysis, which must be given within four hours of the stroke’s onset. Today only a small percentage of patients are diagnosed in time to be able to get this treatment.

Other patients have a stroke caused by bleeding in which a treatment with clot-dissolving medication could be fatal. Proper medical assessment is a battle of time in these cases.

If health care can reduce the damage by giving the right treatment, there are, from a socioeconomic perspective, huge savings to be made. The total annual cost of stroke in Europe amounts to EUR 64.1 billion, according to a recent report from the European Brain Council.

​ The antennas of the helmet sequentially transmit weak microwave signals into the brain. At the same time, the receiving antennas listen for reflected signals. The brain’s different structures and substances affect the microwave scattering and reflections in different ways. The received signals give a complex pattern, which is interpreted with the help of advanced algorithms. Based on these data, the system can diagnose bleeding or a clot. Bleeding is particularly pronounced, but an area with a clot and oxygen deficiency can also be distinguished.