Anemia Triggers Dementia. Fight it with a Good Diet. 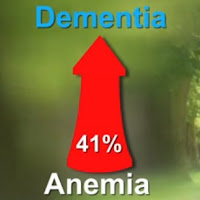 Anemia (low level of red blood cells) can increase dementia risk 41%. You can do something about it. Learn what it takes.

Anemia may increase the risk of dementia, according to a study published in the July 31, 2013, online issue of Neurology®, the medical journal of the American Academy of Neurology.

Kristine Yaffe, MD, is the study author. She is at the University of California – San Francisco and a member of the American Academy of Neurology. She said,

“Anemia is common in the elderly and occurs in up to 23 percent of adults ages 65 and older.”

One way to treat anemia is to increase the amount of oxygen that your blood can carry. This is done by raising the red blood cell count and/or hemoglobin level. (Hemoglobin is the iron-rich protein in red blood cells that carries oxygen to the body.) Below are details on how one can try to achieve this through changes to one’s diet.

For the study, 2,552 older adults between the ages of 70-79 were tested for anemia and also underwent memory and thinking tests over 11 years. Of those, 393 had anemia at the start of the study. At the end of the study, 445, or about 18 percent of participants, developed dementia.

The research found that people who had anemia at the start of the study had a nearly 41 percent higher risk of developing dementia than those who were not anemic. The link remained after considering other factors, such as age, race, sex and education. Of the 393 people with anemia, 89 people, or 23 percent, developed dementia, compared to 366 of the 2,159 people who did not have anemia, or 17 percent.

“There are several explanations for why anemia may be linked to dementia. For example, anemia may be a marker for poor health in general, or low oxygen levels resulting from anemia may play a role in the connection. Reductions in oxygen to the brain have been shown to reduce memory and thinking abilities and may contribute to damage to neurons,” said Yaffe.

Low levels of vitamins or iron in the body can cause some types of anemia. These low levels may be due to poor diet or certain diseases or conditions.

Your body needs iron to make hemoglobin. Your body can more easily absorb iron from meats than from vegetables or other foods. To treat your anemia, your doctor may suggest eating more meat—especially red meat (such as beef or liver), as well as chicken, turkey, fish, and shellfish.

Nonmeat foods that are good sources of iron include:

You can look at the Nutrition Facts label on packaged foods to find out how much iron the items contain.

The amount is given as a percentage of the total amount of iron you need every day.
Iron also is available as a supplement. It’s usually combined with multivitamins and other minerals that help your body absorb iron.

Doctors may recommend iron supplements for premature infants and infants who are fed breast milk only or formula that isn’t fortified with iron.

Large amounts of iron can be harmful, so take iron supplements only as your doctor prescribes.

Low levels of vitamin B12 can lead to pernicious anemia. This type of anemia often is treated with vitamin B12 supplements.

Good food sources of vitamin B12 include:

Folic acid (folate) is a form of vitamin B that’s found in foods. Your body needs folic acid to make and maintain new cells. Folic acid also is very important for pregnant women. It helps them avoid anemia and promotes healthy growth of the fetus.

Good sources of folic acid include:

If you’re taking medicines, ask your doctor or pharmacist whether you can eat grapefruit or drink grapefruit juice. This fruit can affect the strength of a few medicines and how well they work.

Other fruits rich in vitamin C include kiwi fruit, strawberries, and cantaloupes.

The study was supported by the National Institute on Aging and the American Health Assistance Foundation.

The American Academy of Neurology, an association of more than 26,000 neurologists and neuroscience professionals, is dedicated to promoting the highest quality patient-centered neurologic care. A neurologist is a doctor with specialized training in diagnosing, treating and managing disorders of the brain and nervous system such as Alzheimer’s disease, stroke, migraine, multiple sclerosis, concussion, Parkinson’s disease and epilepsy.

Interestingly, Dr. Neal Barnard's new book Power Foods for the Brain states that iron is a major cause of Alzheimer's. I think he is wrong. He also promotes a diet that is 3% fat which I think is dangerously low. There is so much confusion regarding brain health, I can see why the average person gives up in frustration.