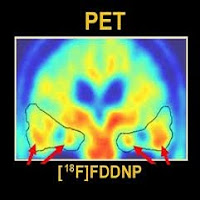 Today’s state-of-the-art in diagnosing Alzheimer’s is the F18 PET Scan. See how it changed one man’s life. Learn how 87% of patients who received an F18 scan made at least one change in their treatment plan.

Until recently, the hardest part in diagnosing Alzheimer’s was the difficulty in “seeing” what was going on in the brain. F18 PET scans changed all that, allowing doctors to “see” how much Alzheimer’s plaque, if any, appeared in the brain.

When the first F18 tests hit the market, they cost a few thousand dollars and were available from only one source. Since then, there has been a rush of activity on the part of pharmaceutical companies to bring better and less expensive F18 tests to market.

The first F18 test to detect brain amyloid deposits (also known as Alzheimer’s plaques) was approved by the FDA in 2012. It was called Florbetapir F18 (renamed AMYViD™).

F18 tests approved by the FDA include:

A Closer Look at Florbetapir F18

Seeing the amount of Alzheimer’s plaque provides doctors with useful information on treatment and further testing for patients with cognitive impairment, according to the study published online by the journal Alzheimer Disease & Associated Disorders. The journal is published by Lippincott Williams & Wilkins, a part of Wolters Kluwer Health.

Is It Alzheimer’s? Florbetapir Provides Evidence

The researchers designed a “real-world” study to determine how florbetapir would affect clinical management of patients with cognitive impairment. While a florbetapir PET scan showing amyloid plaques doesn’t prove that AD is present, it provides a previously unavailable piece of evidence to support the diagnosis.

The study included 229 patients seen by neurologists or other specialists for evaluation of cognitive decline or impairment of uncertain etiology. Before the florbetapir PET scan, doctors provided a provisional diagnosis, an estimate of their diagnostic confidence, and their plans for further testing and treatment. The goal was to assess the value of florbetapir PET in making the final diagnosis and in providing doctors with useful information for clinical decision making.

The florbetapir PET scans showed amyloid deposits in 113 out of 229 patients. The information provided led doctors to change their diagnosis in 55 percent of cases.

Impact on Treatment and Testing Decisions

Florbetapir PET also provided useful information for treatment decision-making: in 87 percent of patients, the results contributed to at least one change in the treatment plan. The main impact was in deciding whether or not to use medications that are helpful in AD. The scan results also affected decisions on further testing—in many cases, physicians dropped plans to perform additional brain imaging studies or neuropsychological tests.

Alzheimer disease is the most common cause of dementia, but the diagnosis can be challenging to make. The only definitive way to diagnose AD is by autopsy examination of the brain after death. Up to 20 percent of patients diagnosed with AD turn out not to have had AD on autopsy, while up to 40 percent of patients diagnosed with other causes of dementia have evidence of AD at autopsy.

Florbetapir PET is the first FDA-approved imaging that can estimate amyloid deposits in the brain of a living patient. Previous studies have shown that the scans are accurate in identifying patients later shown to have AD at autopsy.

The new results show that florbetapir PET scans can have a significant effect in “real world” clinical evaluation of patients with cognitive impairment. By strengthening the case for or against a diagnosis of AD, this test can have a significant impact on patient management—particularly related to the use of AD medications and the need for further testing. Additional studies will be needed to confirm whether “clinical care that includes amyloid imaging will translate into better outcomes” for patients with cognitive impairment and possible AD.

The ARTICLES :
1) In the article published online in October 16,2013 , in the prestigeous medical journal called Neurology , that is the official journal of the American Academy of Neurology , with the title “Pulse wave velocity is associated with β- amyloid deposition in the brains of very elderly adults” – authors Timothy M. Hughes, PhD, Steven T. DeKosky, MD and colleagues , studied a cohort of 91 DEMENTIA-FREE participants aged 83–96 years.In 2009, participants completed brain MRI and PET imaging using Pittsburgh compound B (PiB).
In October 17 , 2013 , one of the the authors of the article , M.Hughes,PhD , in an interview in the site Medpage Today , declared :"When we began looking at the brains of (COGNITIVELY NORMAL) older adults we saw a lot MORE AMYLOID than we expected to see," Hughes continued to MedPage Today "That led to the REALIZATION that the ACCUMULATION of amyloid in the brain may be COMMON IN AGING, and NOT as tied to Alzheimer's disease as we have thought."
2) In another article published online in April 17,2013 inthe american medical journal called Annals of Neurology , that is the official journal of the American Neurological Association , with the title “In vivo assessment of amyloid-β deposition in nondemented very elderly subjects.” the authors wrote :
"Made a study that analysed the betamyloid deposition in one hundred ninety NONDEMENTED subjects aged ≥82 years old , to determine the proportion of Aβ-positive scans” they found that
“ A high proportion of the cognitively normal subjects , fifty one percent (51%) were PiB-positive.
"And the authors wrote too that : “The data revealed a 55% prevalence of PiB positivity in NONDEMENTED subjects age >80 years”.
Amyloid tracers as florbetapir can leads 55% of patients that do it test , to be misdiagnosed as having AD, WHILE THEY ARE HEALTHY PATIENTS, that only have the betamyloid accumulation that is age-related but that do NOT cause dementias.

We can conclude that we can use two definitions as the main arguments about why the “amyloid hypothesis” is a flawed hypothesis or a sophism, and that the misconception of the amyloid hypothesis leads to the misdiagnosis using amyloid tracers.
As is well know , the definition of a scientific premise is :
"A statement that an argument claims will induce or justify a conclusion ."
Or in other words :
A scientific premise is an assumption that something is true”.

But the definition of a scientific sophism is :
" When a so called “premise” can NOT be supported by solids scientifics foundations or proofs , then that is considered a "false premise” , so called a sophism ( a fallacious argumentation – or a False premise).

We can use the definition of a scientific premise pasted above to "open our minds" , to see that based in the scientific articles that I pasted parts of the texts before , and using the logical reasoning we can see that betamyloid accumulation it is NOT the cause of AD , and it is NOT the main culprit of AD symtpons .
Then to use amyloid tracers as a reference to try to do a diagnosis , or to treat based in the false premise of the amyloid hupothesis ,is an absolute and very expensive nonsense.

Mr. Oliveira, please make your point in under 200 words. Your posts are full of good information, but their heavy length makes them unlikely to be read as a comment.

Your entire argument is based on the fact that a person may have plaque and may not have Alzheimer's. While that may be true, it has nothing to do with what F18 tests do. In the video above, the person thought he had Alzheimer's. Thanks to the F18 test, he is relieved to know he does not and can now look for better therapy & treatment. (167 WORDS 🙂 )

Thank you Alz week.
But to proof the point that amyloid tracers do not makes sense to the majority of dementia patients with AD , only putting all the information above, to the readers have the chance to do theirs own research based in the articles above, and to readers use theirs own logic to think about it.
Thank you very much
Carlos (in sixty four words)

Good food for thought. My question is about the book I am reading. The End of Alzheimer's. It is so interesting and promising as it gets deeply into the preventative measures we can take and why. The author, Dale E. Bredesen, MD has and still is researching what we already know and do not. I am very interested to hear what you think. I have worked as a nurse in LTC for 30 years and lost my mother to this disease a year ago.