Sleeplessness has just been shown to accelerate the spread of toxic clumps of Alzheimer’s tau. “Our brains need time to recover from the stresses of the day,” says Dr. David Holtzman. Learn why. Get these 13 tips to a good night’s sleep.

Researchers at Washington University School of Medicine in St. Louis have shown that sleeplessness accelerates the spread through the brain of toxic clumps of tau – a harbinger of brain damage and decisive step along the path to dementia.

Poor sleep has long been linked with Alzheimer’s disease, but researchers have understood little about how sleep disruptions drive the disease.

These findings, published online in the journal Science, indicate that lack of sleep alone helps drive the disease, and suggests that good sleep habits may help preserve brain health. 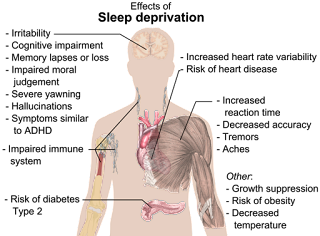 “The interesting thing about this study is that it suggests that real-life factors such as sleep might affect how fast the disease spreads through the brain,” said senior author David Holtzman, MD, the Andrew B. and Gretchen P. Jones Professor and head of the Department of Neurology. “We’ve known that sleep problems and Alzheimer’s are associated in part via a different Alzheimer’s protein — amyloid beta — but this study shows that sleep disruption causes the damaging protein tau to increase rapidly and to spread over time.”

Tau is normally found in the brain — even in healthy people — but under certain conditions it can clump together into tangles that injure nearby tissue and presage cognitive decline. Recent research at the School of Medicine has shown that tau is high in older people who sleep poorly. But it wasn’t clear whether lack of sleep was directly forcing tau levels upward, or if the two were associated in some other way. To find out, Holtzman and colleagues including first authors Jerrah Holth, PhD, a staff scientist, and Sarah Fritschi, PhD, a former postdoctoral scholar in Holtzman’s lab, measured tau levels in mice and people with normal and disrupted sleep.

Mice are nocturnal creatures. The researchers found that tau levels in the fluid surrounding brain cells were about twice as high at night, when the animals were more awake and active, than during the day, when the mice dozed more frequently. Disturbing the mice’s rest during the day caused daytime tau levels to double.

Much the same effect was seen in people. Brendan Lucey, MD, an assistant professor of neurology, obtained cerebrospinal fluid — which bathes the brain and spinal cord — from eight people after a normal night of sleep and again after they were kept awake all night. A sleepless night caused tau levels to rise by about 50 percent, the researchers discovered.

Tau from Normal Thinking and Doing

Staying up all night makes people stressed and cranky and likely to sleep in the next chance they get. While it’s hard to judge the moods of mice, they, too, rebounded from a sleepless day by sleeping more later. To rule out the possibility that stress or behavioral changes accounted for the changes in tau levels, Fritschi created genetically modified mice that could be kept awake for hours at a time by injecting them with a harmless compound. When the compound wears off, the mice return to their normal sleep-wake cycle — without any signs of stress or apparent desire for extra sleep.

Using these mice, the researchers found that staying awake for prolonged periods causes tau levels to rise. Altogether, the findings suggest that tau is routinely released during waking hours by the normal business of thinking and doing, and then this release is decreased during sleep allowing tau to be cleared away. Sleep deprivation interrupts this cycle, allowing tau to build up and making it more likely that the protein will start accumulating into harmful tangles.

In people with Alzheimer’s disease, tau tangles tend to emerge in parts of the brain important for memory — the hippocampus and entorhinal cortex — and then spread to other brain regions. As tau tangles mushroom and more areas become affected, people increasingly struggle to think clearly.

To study whether the spread of tau tangles is affected by sleep, the researchers seeded the hippocampi of mice with tiny clumps of tau and then kept the animals awake for long periods each day. A separate group of mice also was injected with tau tangles but was allowed to sleep whenever they liked. After four weeks, tau tangles had spread further in the sleep-deprived mice than their rested counterparts. Notably, the new tangles appeared in the same areas of the brain affected in people with Alzheimer’s.

The researchers also found that disrupted sleep increased release of synuclein protein, a hallmark of Parkinson’s disease. People with Parkinson’s — like those with Alzheimer’s — often have sleep problems.

Enough Slow-Wave Sleep is All You Need

Henrik Zetterberg at the University of Gothenburg, Sweden, has reassuring research suggesting that only complete sleep deprivation budges cerebrospinal fluid biomarkers. In volunteers who slept four hours per day for five nights in a row, he found no change in the tau biomarkers (Olsson et al., 2018).

The volunteers still obtained a normal amount of deep, slow-wave sleep each night, considered the most protective for the brain. He concluded, “One or a few nights of short sleep does not affect tau concentration.”

“Getting a good night’s sleep is something we should all try to do,” Holtzman said. “Our brains need time to recover from the stresses of the day. We don’t know yet whether getting adequate sleep as people age will protect against Alzheimer’s disease. But it can’t hurt, and this and other data suggest that it may even help delay and slow down the disease process if it has begun.”

Tips for Getting a Good Night’s Sleep

Rock Yourself to Sleep

Dr. Holtzman wants to investigate enhancing slow-wave sleep in mice, to see if it slows the progression of tau pathology. This type of intervention might also work for people. Two new studies show that rocking leads to better sleep and memory consolidation and lengthens slow-wave slumber.

The two new studies reported in Current Biology, one conducted in young adults and the other in mice, add to evidence for the broad benefits of a rocking motion during sleep. In fact, the studies in people show that rocking not only leads to better sleep, but it also boosts memory consolidation during sleep.

“Having a good night’s sleep means falling asleep rapidly and then staying asleep during the whole night,” says Laurence Bayer of the University of Geneva, Switzerland. “Our volunteers–even if they were all good sleepers–fell asleep more rapidly when rocked and had longer periods of deeper sleep associated with fewer arousals during the night. We thus show that rocking is good for sleep.”

Bayer and their colleagues had earlier shown that continuous rocking during a 45-minute nap helped people to fall asleep faster and sleep more soundly. In the new study, led by Laurence Bayer and Sophie Schwartz, University of Geneva, Switzerland, they wanted to explore the effects of rocking on sleep and its associated brain waves throughout the night.

The researchers enlisted 18 healthy young adults to undergo sleep monitoring in the lab. The first night was intended to get them used to sleeping there. They then stayed two more nights–one sleeping on a gently rocking bed and the other sleeping on an identical bed that wasn’t moving.

Next, the researchers wanted to know how that better sleep influenced memory. To assess memory consolidation, participants studied word pairs. The researchers then measured their accuracy in recalling those paired words in an evening session compared to the next morning when they woke up. They found that people did better on the morning test when they were rocked during sleep.

Further studies showed that rocking affects brain oscillations during sleep. They saw that the rocking motion caused an entrainment of specific brain oscillations of non-rapid eye movement sleep (slow oscillations and spindles). As a result, the continuous rocking motion helped to synchronize neural activity in the thalamo-cortical networks of the brain, which play an important role in both sleep and memory consolidation.

Better Sleep for Both People and Animals

The second study in mice by Konstantinos Kompotis and colleagues is the first to explore whether rocking promotes sleep in other species. And, indeed, it did. The researchers, led by Paul Franken, University of Lausanne, Switzerland, used commercial reciprocating shakers to rock the cages of mice as they slept.

While the best rocking frequency for mice was found to be four times faster than in people, the researchers’ studies show that rocking reduced the time it took to fall asleep and increased sleep time in mice as it does in humans. However, the mice did not show evidence of sleeping more deeply.

Sleep, Rocking and the Vestibular System

Researchers had suspected that the effects of rocking on sleep were tied to rhythmic stimulation of the vestibular system, the sensory system that contributes to the sense of balance and spatial orientation. To explore this notion in the mouse, the researchers studied animals whose vestibular systems were disrupted by non-functioning otolithic organs, found in their ears. Their studies showed that mice lacking working otolithic organs experienced none of the beneficial effects of rocking during sleep.

Taken together, the two studies “provide new insights into the neurophysiological mechanisms underlying the effects of rocking stimulation on sleep,” Bayer and Perrault write. The findings may be relevant for the development of new approaches for treating patients with insomnia and mood disorders, as well as older people, who frequently suffer from poor sleep and memory impairments.

Leading to Better Ways to Cope with Insomnia

The researchers say it will be essential in future work to explore the precise deeper brain structures involved in the effects of rocking on sleep.

“Current tools, such as optogenetics, can help us decipher which structures, or even neuronal populations, receive the stimulus from the otolithic organs and transfer it further to the structures of the sleep circuitry,” Franken says. “Mapping the network of communication between the two systems will provide with basic understanding, as well as novel clinical targets to cope with sleep disorders, like insomnia.”