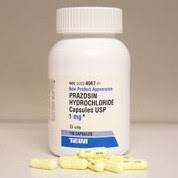 Agitation can be a disruptive, chronic problem in Alzheimer’s. It increases caregiver burden as well as patient distress and is often the trigger to long-term care outside the home. ADCS is testing the generic drug prazosin as a treatment for agitation, as it promises to be well-tolerated in frail and elderly people with dementia.

With new research funding from the National Institutes of Health, the Alzheimer’s Disease Cooperative Study (ADCS) is focusing on testing a handful of new innovative treatments for Alzheimer’s.

One particularly promising treatment is the use of prazosin for treating agitation in Alzheimer’s. Prazosin is already FDA approved for other treatments. This typically means that it is safer and faster to test and is a treatment that doctors can prescribe off-label as the test results become available.

Disruptive agitation is often a chronic problem in people with Alzheimer’s, dramatically increasing caregiver burden and patient distress, often leading to long-term care outside the home. Currently, drugs used to treat agitation are not very effective and may even cause additional harm in older people, such as increased risk of stroke or excessive sedation.

The ADCS will test the use of the generic drug prazosin as a treatment for agitation. One key aspect of the trial is to test the hope that prazosin will be well-tolerated in the frail and elderly population typical of the community living with dementia. The Principal investigator will be Elaine Peskind, M.D., of the University of Washington Alzheimer’s Disease Research Center, Seattle.

ADCS is a national consortium of academic medical centers and clinics set up by NIH in 1991 to collaborate on the development of Alzheimer’s treatments and diagnostic tools. In this round of studies, the ADCS will test drug and exercise interventions in people in the early stages of the disease. Among their goals is to examine a medication to reduce agitation in people with Alzheimer’s dementia.

The National Institute on Aging (NIA), the lead institute within NIH for Alzheimer’s research, announced the award on Jan. 14, 2013. The ADCS will receive $11 million in fiscal year 2013, and the effort could total as much as $55 million over the five years of the project. The consortium, coordinated by the University of California, San Diego and led by Paul Aisen, M.D., is made up of  more than 70 research sites in the United States and Canada. Their focus ison advancing studies of interventions that might not otherwise be tested by industry.

“The ADCS is a key initiative in the federal program to discover, develop and test new Alzheimer’s treatments and diagnostic tools. Over the years, it has proved invaluable in advancing our understanding about the disease and how to conduct research in this challenging area,” said NIA Director Richard J. Hodes, M.D.

The ADCS and this latest round of studies, Hodes noted, are critical to accomplishing the research goals set forth in the National Plan to Address Alzheimer’s Disease announced by Health and Human Services Secretary Kathleen Sebelius in May 2012.  The plan was developed under the National Alzheimer’s Project Act, which calls for a coordinated and concentrated effort in research, care and services for Alzheimer’s and related dementias. Its primary research goal is to prevent and effectively treat Alzheimer’s disease by 2025.

The main indication approved by FDA to prazosin it is as a drug to treat high blood pressure , and as we can see in the site of FDA,Prazosin, by it self, can cause DEEP HYPOTENSION just in the FIRST dose.

To elderly deep hypotension increases the risk of stroke and heart attacks to the aged patients.
The off label use of Prazosin in a questionable trying to control agitation , have to be well monitorized by the physician the patient , mainly when the elderly patients will , in a threating way to his health ,to takes prazosin associated to other anti-hypertensive drugs that the patient is taking as routine to control his high blood pressure.

The researchers could register the probable increase in the numbers of heart attacks and strokes in the first six months after the starting of researches with the off label use of prazosin in aged dementia patients , that are taking other a.ti hypertensive drugs.