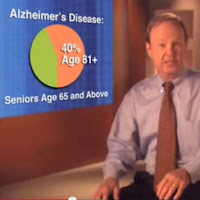 Watch this clear, easy-to-understand Alzheimer’s introduction, what doctors can and cannot do about it, and the road ahead.

In 1907, Alois Alzheimer peered through a microscope at the brain of a 55-year-old woman who had died after a rapid downhill course of pre-mature senility or dementia.1 What he saw was a mass of disordered and twisted protein fragments where normal brain cells and fibers should have been. Describing their appearance, he tagged these “neurofibrillary tangles.” Later, the disease associated with this condition became known as “Alzheimer’s disease.”2 Now, on the eve of the 100th anniversary of Alois Alzheimer’s discovery, how much closer are we to untangling this mess?

The answer is…closer – but not close enough. Alzheimer’s is a tough opponent, and we have a long way to go.

Still, there’s encouraging news for Alzheimer’s patients, which we’ll get to in a moment.

But first, let’s take a look at the history of the disease. Though it was discovered a century ago, the world’s focus on Alzheimer’s is only about 30 years old.3 It took nearly 70 years for the global scientific community to publicly connect the symptoms and findings to the disease and correctly assess the threat as the leading edge of disability for aging societies worldwide. Early in the process, it was recognized that this disease not only devastated the patient, but also family and loved ones; and that dealing with it would require enormous informational, emotional and logistical support.4 Out of this need emerged the Alzheimer’s Association in 1979.5

Thirty years ago, investigation into the disease was fledgling at best. In 1975, the National Institutes of Health awarded only 12 grants at $60,000 each for the study of brain aging.3Today, the NIH annual research budget for Alzheimer’s disease is approximately $650 million.6 The private industry is “on to this issue” as well, considering the extraordinary numbers and staggering disability involved – two things that, if addressed, would translate into enormous societal good and remarkable earnings.7

The number of people affected and at risk has now come into clear focus. Approximately 6% of those over age 65, and up to 40% of those over age 80, suffer from the disease.3 By 2040, it is estimated that some 14 million people in the United States alone will be affected.8 Related spending is currently around $100 billion a year, and the disease is estimated to be the fourth or fifth most common cause of death in the United States.3

Numbers like these caused medical essayist Lewis Thomas early on to tag this condition “the disease of the century.”9 We know today that the areas most impacted are deep in the brain, not on the surface, affecting sites where activities are organized and integrated, including functions of memory, attention and association, such as putting a time and place to past events. We also know the disease preferentially attacks where we are neurologically most vulnerable — at the synapse, the point where one nerve cell connects to the next. The chemicals that pass across the synapse, the messengers, if you will, especially acetylcholine, are diminished by the disease. Thus, some treatments for Alzheimer’s attempt to maintain and heighten the acetylcholine that is still present. We have learned that certain chemicals are deposited in the area of destruction, either as a cause of it or an effect from some other primary process, and the names of these chemicals are increasingly recognizable, including amyloid, apolipoprotein and Tau protein. And finally, we now know that genetic mutations on chromosomes 21, 14 and 1 are sometimes associated with familial cases of the disease.3

We now understand that the disease process results in profound behavioral and psychological changes in patients that are predictable and progressive.11 Thirty years ago, a great deal of this was explained away as “benign senescent forgetfulness.”3 But increasingly aggressive diagnostic assessment tools are pushing the time of diagnosis back closer to the point of origin; back closer to the chemical and biological processes that ensure future disability; back closer to an understanding of the events that will allow the development of effective new therapies. Today, experiments utilizing advanced MRIs detect early regional brain tissue loss. PET scans measure declines in regional glucose metabolism and diminished cerebral blood flow, which precede measurable declines in cognitive function. Stress test PET scans detect failure of high-energy demanding synapses as an early signal of future disease. And cerebrospinal fluid levels of chemicals tied to abnormal Tau protein and amyloid peptides help distinguish Alzheimer’s from Parkinson’s disease, alcoholic dementia, and depresssion.3

In addition to the direct focus on the primary disease, scientists now appreciate a variety of contributors to vascular dementia, which can complicate Alzheimer’s and worsen the societal burden in managing the challenges of aging. A focus on diagnosis and chronic management of hypertension, diabetes, cardiovascular disease, sleep apnea, and high circulating cholesterol, protein, and homocysteine could lessen the burden of dementia.8 We also now recognize on the front end of a diagnosis the vulnerability of first responders, and we’re conscious that the “first rule of caregiving is that care of the caregiver is the most effective treatment for the person with Alzheimer’s disease.”4

How close are we to solving this riddle, to untangling the tangled web of Alzheimer’s? No one can say for sure, but we are certainly much closer than we were 30 years ago. We have moved from the gross findings and microscopic descriptions to the biologic, chemical, genetic and epidemiologic aspects of this disease. That is to say that scientists have begun to zero-in on the targets and are figuring out how to influence them. At scientific moments like this, it can be difficult to determine the next step. Will the cure help us understand brain function, or will understanding brain function help point us toward a cure? We just don’t know. But it’s clear we’re making progress, and where there’s progress, there is always reason to hope.