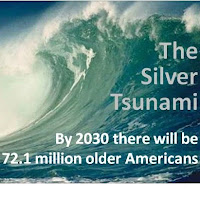 In an ironic twist of global fate, longer lifespans are gearing up the planet for an Alzheimer’s explosion. Nicknamed “The Silver Tsunami”, a new study shows Alzheimer’s will triple by 2050. Learn why. See how to prevent it.

MINNEAPOLIS – The number of people with Alzheimer’s disease is expected to triple in the next 40 years, according to a new study published in the February 6, 2013, online issue of Neurology®, the medical journal of the American Academy of Neurology.

“This increase is due to an aging baby boom generation. It will place a huge burden on society, disabling more people who develop the disease, challenging their caregivers, and straining medical and social safety nets,” said co-author Jennifer Weuve, MPH, ScD, assistant professor of medicine, Rush Institute for Healthy Aging at Rush University Medical Center in Chicago. “Our study draws attention to an urgent need for more research, treatments and preventive strategies to reduce this epidemic.”

For the study, researchers analyzed information from 10,802 African-American and Caucasian people living in Chicago, ages 65 and older, between 1993 and 2011. Participants were interviewed and assessed for dementia every three years. Age, race and level of education were factored into the research.

The data were combined with US death rates, education and current and future population estimates from the US Census Bureau.

“Our detailed projections use the most up-to-date data, but they are similar to projections made years and decades ago. All of these projections anticipate a future with a dramatic increase in the number of people with Alzheimer’s and should compel us to prepare for it,” said Weuve.

To learn more about Alzheimer’s disease, visit http://www.aan.com/patients. The American Academy of Neurology, an association of more than 25,000 neurologists and neuroscience professionals, is dedicated to promoting the highest quality patient-centered neurologic care. A neurologist is a doctor with specialized training in diagnosing, treating and managing disorders of the brain and nervous system such as Alzheimer’s disease, stroke, migraine, multiple sclerosis, brain injury, Parkinson’s disease and epilepsy. For more information about the American Academy of Neurology, visit http://www.aan.com or find us on Facebook, Twitter, Google+ and YouTube.