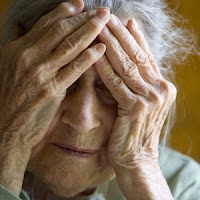 Striking out or shouting while asleep, called RBD, may be a very early warning of Lewy Body dementia. Learn what to look for and what to do about it.

SAN DIEGO — The strongest predictor of whether a man is developing dementia with Lewy bodies — the second most common form of dementia in the elderly — is whether he acts out his dreams while sleeping, Mayo Clinic researchers have discovered. Patients are five times more likely to have dementia with Lewy bodies if they experience a condition known as rapid eye movement (REM) sleep behavior disorder than if they have one of the risk factors now used to make a diagnosis, such as fluctuating cognition or hallucinations, the study found.

The findings were being presented at the annual meeting of the American Academy of Neurology in San Diego. REM sleep behavior disorder is caused by loss of the normal muscle paralysis that occurs during REM sleep. It can appear three decades or more before a diagnosis of dementia with Lewy bodies is made in males, the researchers say. The link between dementia with Lewy bodies and the sleep disorder is not as strong in women, they add.

“While it is, of course, true that not everyone who has this sleep disorder develops dementia with Lewy bodies, as many as 75 to 80 percent of men with dementia with Lewy bodies in our Mayo database did experience REM sleep behavior disorder. So it is a very powerful marker for the disease,” says lead investigator Melissa Murray, Ph.D., a neuroscientist at Mayo Clinic in Florida.

The study’s findings could improve diagnosis of this dementia, which can lead to beneficial treatment, Dr. Murray says.

“Screening for the sleep disorder in a patient with dementia could help clinicians diagnose either dementia with Lewy bodies or Alzheimer’s disease,” she says. “It can sometimes be very difficult to tell the difference between these two dementias, especially in the early stages, but we have found that only 2 to 3 percent of patients with Alzheimer’s disease have a history of this sleep disorder.”

Once the diagnosis of dementia with Lewy bodies is made, patients can use drugs that can treat cognitive issues, Dr. Murray says. No cure is currently available.

Researchers at Mayo Clinic in Minnesota and Florida, led by Dr. Murray, examined magnetic resonance imaging, or MRI, scans of the brains of 75 patients diagnosed with probable dementia with Lewy bodies. A low-to-high likelihood of dementia was made upon an autopsy examination of the brain.

“When there is greater certainty in the diagnosis, we can treat patients accordingly. Dementia with Lewy bodies patients who lack Alzheimer’s-like atrophy on an MRI scan are more likely to respond to therapy — certain classes of drugs — than those who have some Alzheimer’s pathology,” Dr. Murray says.

WHAT YOU CAN DO

A heart-healthy lifestyle has been associated with lowering the risk of Lewy Body dementia. Diet, exercise and other smart choices that are good for the heart are also good for the brain.

There is currently no “silver bullet” to prevent or cure Lewy Body dementia. Notwithstanding, many studies have shown that certain lifestyles are clearly associated with less dementia. The articles and videos in this site’s PREVENTION library and at “Eat2think.com” discuss many simple things that low-risk groups do to prevent & fight dementia.

Mayo Clinic is a nonprofit worldwide leader in medical care, research and education for people from all walks of life. For more information, visit MayoClinic.com or MayoClinic.org/news.

Journalists can become a member of the Mayo Clinic News Network for the latest health, science and research news and access to video, audio, text and graphic elements that can be downloaded or embedded.