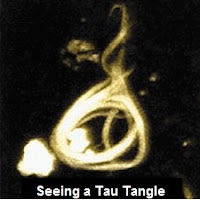 ARTICLE ON TRACERS + VIDEO ON TAU

2 new PET tracers promise to change the face of diagnosing and researching dementias such as Alzheimer’s. Learn how Ely Lilly’s new technology will let doctors see dangerous tau tangles in a brain with dementia.

INDIANAPOLIS /PRNewswire/ — Eli Lilly and Company announced it has acquired two investigational positron emission tomography (PET) tracers. The tracers are intended to image tau (or neurofibrillary) tangles in the brain.

How Tau Tangles Damage a Brain

The two known hallmarks of Alzheimer’s disease are:

Other types of dementia in which tau tangles cause damage include:

Based on studies of samples obtained at autopsy, the amount and location of tau tangles in an Alzheimer’s disease patient’s brain is thought to correlate with the severity of the disease. There are currently no approved diagnostics to detect tau tangles in living patients, creating challenges for scientists working to understand the progression of the disease and how therapies may impact it.

The technology was acquired from Siemens Medical Solutions USA, Inc.

Lilly will initially focus on incorporating this new technology into its anti-amyloid and anti-tau research and development (R&D) programs. Use of a tau tangle tracer could enable tailoring and early identification of at-risk patients, as well as potentially provide a marker for treatment response. Lilly also has the option to commercialize the tracers. The tracers will be developed and validated by a team at Avid Radiopharmaceuticals, Lilly’s wholly owned subsidiary focused on molecular imaging. Financial terms of the deal are not being disclosed.

“PET imaging is a valuable tool in the fight against Alzheimer’s disease, and Siemens is committed to helping fight this growing threat to our aging population,” said James Williams, CEO, Siemens Molecular Imaging business unit. “Lilly’s continued development of these tau PET tracers combined with Siemens’ ongoing investment in innovative PET imaging solutions is another great example of how Siemens is collaborating with pharmaceutical companies in an effort to provide new hope to patients and their families.”

Scientists theorize that both beta-amyloid plaques and tau tangles are required for the development of Alzheimer’s disease, with the accumulation of amyloid beta representing the early trigger that initiates the disease process and tau tangles playing a secondary but critical role in the process of neuronal toxicity and death. For this reason, Lilly has established R&D programs to explore both the amyloid and tau hypotheses. Today’s acquisition will inform and help progress Lilly’s multiple approaches to treating Alzheimer’s disease, with the goal of speeding innovation to patients worldwide.

About Eli Lilly and Company
Lilly, a leading innovation-driven corporation, is developing a growing portfolio of pharmaceutical products by applying the latest research from its own worldwide laboratories and from collaborations with eminent scientific organizations. Headquartered in Indianapolis, Ind., Lilly provides answers — through medicines and information — for some of the world’s most urgent medical needs. Additional information about Lilly is available at www.lilly.com.