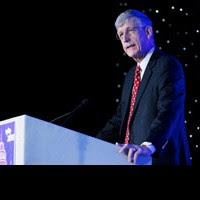 Dr. Francis Collins, director of the National Institutes of Health (NIH), just gave Americans a dose of good news on Alzheimer’s research. Find out what he is doing to fight back during a time when financial resources are in short supply.

At the recent General Session of the Alzheimer’s Association Advocacy Forum, Collins announced — in what he termed a unique step — that he has designated $40 million from his fiscal year 2013 director’s budget for Alzheimer’s research by scientists who recently submitted applications at the request of the National Institute on Aging.

In addition, Collins pointed out that President Barack Obama’s FY14 budget would add $80 million for Alzheimer’s research “over and above what’s being supported for any other condition, again reflecting the way this administration prioritizes this disease.”

“I so wish it could be more,” he said. “But I hope you hear in this kind of a commitment the way in which we at NIH see this as an opportunity and a responsibility. We also hope that moving forward we can put medical research back on the stable track that is needed in order to support the research and the researchers.”

Despite the budget uncertainty, Collins spelled out a number of current developments related to Alzheimer’s research. These include the recently announced Brain Research through Advancing Innovative Neurotechnologies (BRAIN) mapping project; the Alzheimer’s Disease Neuroimaging Initiative (ADNI); the discovery of 10 new genetic variants; animal models, such as a new rat model featuring both plaques and tangles; more than a dozen Alzheimer’s clinical trials under way; and the repurposing of drugs not originally meant to treat the disease.

“The sense that we have in the research community of accelerated momentum in Alzheimer’s research is palpable,” Collins said. “It would be fair to say that 8 to 10 years ago, people were feeling a little frustrated, a little discouraged — it seemed as if progress was really slow. Now, researchers in this field are energized because of a variety of new things that have come along, many of them in just the last couple of years, that give us a sense that we’re finally beginning to get a real handle on what causes this disease and what to do about it.”

Collins closed his remarks by conveying the sense of hope that he and the NIH feel about the future of Alzheimer’s research.

“I’m reminded of a quote that I’m fond of because it applies to medical research,” he said. “It’s from Peter Levi: ‘Hope in every sphere of life is a privilege that attaches to action. No action, no hope.’ We at NIH, we’re all about action. The Alzheimer’s Association is about action; that’s why you’re here. Together, I believe we can do great things.”

Barrick Wilson, of Wichita, Kan., saw his wife diagnosed with Alzheimer’s in 2008 at age 64 and took early retirement to serve as her caregiver before placing her in a care facility this year. He was pleased to hear Collins talk about the potential of, and progress in, Alzheimer’s research.

“I’m very enthusiastic about it,” he said. “I took away a good, positive message that things are headed in the right direction.”

Good news??? I just don't see anything but numbers that show that Alzheimer's research will continue to be funded at a level that is ONLY ***10%*** that of cancer. If we were truly headed in the right direction, we'd be planning "Survivor's Walks". Facts are stubborn things and the fact remains that funding for Alzheimer's research is appallingly low and the increases do nothing to change that. Today my wife who was diagnosed with Alzheimer's at age 54 will be visited by our son, his wife and their two children. She hasn't recognized them for a while. With some luck my wife will recognize me. Increases in research funds won't help us now. But how many of those who are diagnosed in the next 10 years will live long to see "a cure by 2025" when today, there is not even a treatment for the disease. "Potential"? That really means we have a loooong way to go and the "baby steps" we're taking need to become great strides real soon!!

High serum albumin cleans the brain of amyloid deposits and it is linked to higher hygiene more than diet.National Health Federation 2011. The NIH has failed to inform the public for 20 yrs while the search for a dangerous drug has billions wasted.