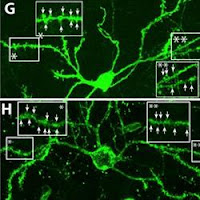 Researchers have been able to mobilize the brain’s native stem cells to replenish a type of neuron lost in Huntington’s disease. Learn how they improved health and extended life in the lab.

In the study, which appears in the journal Cell Stem Cell, the scientists were able to both trigger the production of new neurons in mice with the disease and show that the new cells successfully integrated into the brain’s existing neural networks, dramatically extending the survival of the treated mice.

Huntington’s disease is an inherited neurodegenerative disease characterized by the loss of a specific cell type called the medium spiny neuron, a cell that is critical to motor control. The disease, which affects some 30,000 people in the U.S., results in involuntary movements, problems with coordination, and, ultimately, in cognitive decline and depression. There is currently no way to slow or modify this fatal disease.

For Goldman, the idea behind his strategy to treat the disease emerged from his decades-long study of neural plasticity in canaries. Songbirds like canaries have intrigued biologists because of their ability – unique in the animal kingdom – to lay down new neurons in the adult brain. This process, called adult neurogenesis, was first discovered by Goldman and Fernando Nottebohm of the Rockefeller University in the early 1980s, when the two realized that when learning new songs new neurons were added to regions of the bird’s brain responsible for vocal control.

“Our work with canaries essentially provided us with the information we needed to understand how to add new neurons to adult brain tissue,” said Goldman. “Once we mastered how this happened in birds, we set about how to replicate the process in the adult mammalian brain.”

Humans already possess the ability to create new neurons. Goldman’s lab demonstrated in the 1990s that a font of neuronal precursor cells exist in the lining of the ventricles, structures found in the core of the human brain. In early development, these cells are actively producing neurons. However, shortly after birth the neural stem cells stop generating neurons and instead produce glia, a family of support cells that pervade the central nervous system. Some parts of the human brain continue to produce neurons into adulthood, the most prominent example is the hippocampus where memories are formed and stored. But in the striatum, the region of the brain that is devastated by Huntington’s disease, this capability is “switched off” in adulthood.

Goldman and his team spent the past decade attempting to unravel the precise chemical signaling responsible for instructing neural stem cells when to create neurons and when to create glia cells. One of the most critical clues came directly from the earlier research with canaries. In the part of the bird’s brain were new songs are acquired and neurons added, the scientists observed the regulated expression of a protein called brain derived neurotrophic factor, or BDNF.   When the production of this protein is triggered, the local neural stem cells are instructed to produce neurons.

At the same time, the scientists also realized that they had to simultaneously suppress the bias of these stem cells to produce glia. They found that when BDNF was combined with another molecule called noggin – a protein that inhibits the chemical pathway that dictates the creation of glial cells – they could successfully switch the stem cell’s molecular machinery over to the production of neurons.

The next challenge was how to deliver these two proteins – BDNF and noggin – precisely and in a sustained fashion to the area of the brain involved in Huntington’s disease. To do so, they partnered with scientists at the University of Iowa to modify a viral gene therapeutic, called an adeno-associated virus, to deliver the necessary molecular instructions to the neural stem cells.

The virus infected the target cells in the brains of mice with Huntington’s disease and triggered the sustained over-expression of both BDNF and noggin. This, in turn, activated the neighboring neural stem cells which began to produce medium spiny motor neurons. The new neurons were continuously generated and migrated to the striatum, the region of the brain impacted by Huntington’s disease, where they then integrated into the existing neuronal networks.

The researchers were able to significantly extend the survival of the treated mice, in some cases doubling their life expectancy. The researchers also devised a way to tag the new neurons and observed that the cells extended fibers to distant targets within the brain and establish electrical communication.

After having established the ability to generate new replacement neurons in mouse models of Huntington’s disease, the researchers also demonstrated that they could replicate this technique in the brains of normal squirrel monkeys, a step that brings the research much closer to tests in humans.

“The sustained delivery of BDNF and noggin into the adult brain was clearly associated with both increased neurogenesis and delayed disease progression,” said Goldman. “We believe that our data suggest the feasibility of this process as a viable therapeutic strategy for Huntington’s disease.”

Additional co-authors of the study included its first author, Abdellatif Benraiss, with whom Goldman has collaborated for over a decade on these studies. Working with Benraiss and Goldman were Michael Toner, Qiwu Xu, Elodie Bruel-Jungerman, Eloise Rogers, Fushun Wang, and Maiken Nedergaard with URMC, Aris Economides with Regeneron Pharmaceuticals, Beverly Davidson with the University of Iowa, and Ryoichiro Kageyama with Kyoto University in Japan. The study was funded by the National Institute of Neurological Disorders and Stroke, the Hereditary Disease Foundation, the CHDI Foundation, and the New York State Stem Cell Research Program.