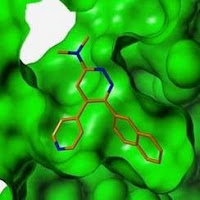 A new experimental drug may rescue brain cells just as they begin to become impaired, stopping Alzheimer’s before it is even noticeable. Learn why researchers say MW108 has an effect that has never been seen before.

A new class of experimental drug-like small molecules is showing great promise in targeting a brain enzyme to prevent early memory loss in Alzheimer’s disease, according to Northwestern Medicine® research.

Developed in the laboratory of D. Martin Watterson, the molecules halted memory loss and fixed damaged communication among brain cells in a mouse model of Alzheimer’s.

“This is the starting point for the development of a new class of drugs,” said Watterson, lead author of a paper on the study and the John G. Searle Professor of Molecular Biology and Biochemistry at Northwestern University Feinberg School of Medicine. “It’s possible someday this class of drugs could be given early on to people to arrest certain aspects of Alzheimer’s.”

Changes in the brain start to occur ten to 15 years before serious memory problems become apparent in Alzheimer’s.

“This class of drugs could be beneficial when the nerve cells are just beginning to become impaired,” said Linda Van Eldik, a senior author of the paper and director of the University of Kentucky Sanders-Brown Center on Aging.

The study is a collaboration between Northwestern’s Feinberg School, Columbia University Medical Center and the University of Kentucky. It was published June 26 in the journal PLOS ONE.

The novel drug-like molecule, called MW108, reduces the activity of an enzyme that is over-activated during Alzheimer’s and is considered a contributor to brain inflammation and impaired neuron function. Strong communication between neurons in the brain is an essential process for memory formation.

“I’m not aware of any other drug that has this effect on the central nervous system,” Watterson said.

“These exciting results provide new hope for developing drugs against an important molecular target in the brain,” said Roderick Corriveau, program director at the National Institute of Neurological Disorders and Stroke, which helped support the research. “They also provide a promising strategy for identifying small molecule drugs designed to treat Alzheimer’s disease and other neurological disorders.”

Watterson and his collaborators have a new National Institutes of Health (NIH) award to further refine the compound so it is metabolically stable and safe for use in humans and develop it to the point of starting a phase 1 clinical trial.

Other senior authors on the paper are Wayne Anderson, professor of molecular pharmacology and biological chemistry at Feinberg, and Ottavio Arancio, M.D., associate professor of pathology and cell biology at Columbia.

The compound strikes at a new, single target that has long flown under the radar in Alzheimer ‘s drug development. The target is a stress-related protein kinase, p38alpha MAPK.

“We think this protein kinase target is one of the key players in the early to mid-stage of several diseases of the central nervous system and cancer,” Watterson said. Recent neuroscience research has shown that the target is activated in neurological disorders such as Alzheimer’s.

These other diseases include amyotrophic lateral sclerosis (ALS or Lou Gehrig’s disease), Parkinson’s and frontotemporal dementia. In cancer, the protein helps malignant tumors evade the immune system as they metastasize and alter their microenvironment in a stealth type of expansion. Scientists at the University of California at San Diego currently are studying MW108 in preclinical cancer immunology research.

In a key memory experiment in the study, mice brains were injected with beta-amyloid, whose increase is one hallmark of Alzheimer’s in humans. One group of mice was then administered MW108 and another group was administered a placebo.

Next, each group of mice was taught environmental cues to learn how to swim through a water maze to find a resting platform. Then the mice were placed in a different arm of the maze and tested on their ability to remember the location of the platform based on the environmental cues.

The mice administered MW108 found the resting platform in the water maze as quickly as a control group of mice. The mice given the placebo made more mistakes and took longer to find the platform. They also had difficulty learning the location of the resting platform during the teaching phase.

Can You Hear Me Now?

Another experiment in the study directly tested the compound’s effect on the synaptic signal, the strength of the electrical connection between brain cells. Like a signal on your cell phone, you can’t hear what the caller is saying if you don’t have a strong signal. The same goes for brain cell communication.

“That’s why we think people with Alzheimer’s disease have trouble learning,” said Columbia’s Arancio, who performed the synaptic signal experiment. “If you can’t transmit information from one cell to another, you can’t learn.”

The p38 MAPK is also present in glial cells, which are critical to the brain’s health and comprise 90 percent of brain cells. They control the strength and duration of the synaptic signal. Too much activation of p38 MAPK in glial cells impairs their supportive function and can result in the release of neurotoxic molecules further harming the synapse.

MW108 protects the brain in two different but complementary ways. By inhibiting p38 MAPK, it prevents both inflammation in the glial cells and disruption of the neuronal messages at the synapse. The result is a robust signal between neurons and within the larger communication network, which protects memory formation.

Designing the Right Puzzle Piece To Disable the Target

The new drug-like probe strikes a single bull’s eye that selectively disables the lone protein kinase, whose over activation is a major contributor to the brain network dysfunction. The single target approach of MW108 is novel. The prevailing view has been that multiple kinases in a network had to be disabled in order to restore normal function. There are an estimated 400-500 kinases in the human genome, with literally dozens being activated during disease processes. The research of Watterson and collaborators shows that striking the right one can be highly effective.

Watterson envisions that an array of drugs eventually will be used to treat Alzheimer’s and other complex neurological diseases. He said MW108 was designed to minimize drug interaction so it could be used in combination with other drugs.

Wayne Anderson is one of the leaders of Northwestern’s structural genomics programs, which use state-of-the-art expertise and technology to map the three-dimensional atomic structure of proteins involved in human disease. Anderson and Valerie Grum-Tokars, a junior structural biologist on the team, developed a three-dimensional structure of human p38 MAPK, enabling the chemists to design and synthesize novel drug-like small molecules that would disable it.

“We found the piece that fits precisely into the binding site of the protein kinase and prevents its operation,” Anderson said.

The research represents a pillar of Northwestern’s Strategic Plan by discovering new ways to treat disease in the biomedical sciences.

As the text above shows , drugs that lowers the over-activation of protein kinase p38 MAPK can delay neurodegenerative diseases ,and can delay or can be a support therapy not only to dementias , but too for some heart diseases , as we can see in the title and part of the article that I pasted bellow.

Glucosamine , a nutritional supplement that is a made from crustaceans shells (as crabs) , it is used for joint protection ( chondroprotection) in humans , in the last 40 years , and in dogs and horses in the lasts 60 years.

The “joint supplement” GLUCOSAMINE , is inexpensive and as the scientific article bellow shows, glucosamine can lowers too the over-activation of protein kinase p38 MAPK, with a very low cost, helping to control brain and heart pathological conditions.

Maybe it mechanism can explain , one of the reasons that glucosamine sulfate in small doses , is helping to improves cognition, mood and behavior of my aunt (in an empirical use) associated to SMALL doses others supplements as glucuronolactone, acetyl L carnitine, L-carnosine and extra virgin coconut oil. ( but only the physician of the patient can prescribes and gives permission for the use of such supplements to dementia patients or to any others patients).

I pasted bellow the title and part of the article about the “joint supplement” GLUCOSAMINE effects lowering the over-activation of protein kinase p38 MAPK :

1) From the American Journal of Physiology Heart Circulatory Physiology :

Title of the article : GLUCOSAMINE CARDIOPROTECTION IN PERFUSED RAT HEARTS ASSOCIATED WITH INCREASED O-LINKED N-ACETYLGLUCOSAMINE PROTEIN MODIFICATION AND ALTERED P38 ACTIVATION .
authors – Norbert Fülöp, Zhenghao Zhang, Richard B. Marchase, and John C. Chatham , Dept. of Medicine, University of Alabama at Birmingham.
Part of the text:
" …Conclusion :These data support the notion that O-GlcNAc may play an important role as an internal stress response and that GLUCOSAMINE-induced cardioprotection may be mediated via the p38 MAPK pathway…” (From the American Journal of Physiology Heart Circulatory Physiology)

2) In a scientific article in the journal called Reumatology International , we can read that glucosamine have a chondroprotective effect because , between others mechanisms of chondroprotection , glucosamine inhibit the over-activation of p38 MAPK too , lowering the production of inflammatory substances.

Title of the article : Chondroprotective effects of glucosamine involving the p38 MAPK and Akt signaling pathways.(2008) –
Author : Yi-Cheng Lin from the Department of Orthopedics, Mackay Memorial Hospital, Taipei, Taiwan .
Sentence from the article : “ … inhibition of the P38 PATHWAY in the presence of GLUCOSAMINE substantially explains the chondroprotective effect of glucosamine on chondrocytes that regulate COX-2 expression, PGE(2) synthesis, and NO expression and synthesis…”(from the journal Reumatology International – 2008).

The articles about the inhibition of over-activation of p38 MAPK ,shosws that researchers have another substance , the GLUCOSAMINE SULFATE, with a very low cost and with a high efficacy to control neuroinflammation in AD and others neurodegenerative diseases , lowering the over-activation of protein kinase p38 MAPK.

I hope that researchers starts to look and see that GLUCOSAMINE is a very interesting substance to be used as a base to develop others substances, derivatives from glucosamine , with a higher effectiviness and with more stable results to treat neurodegenerative diseases, heart diseases, etc.