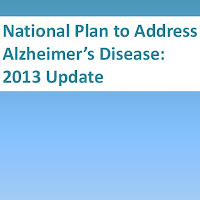 Watch videos on the newly released National Plan to Address Alzheimer’s Disease: 2013 Update. Read about the new timeline for achieving its first goal – prevent and effectively treat Alzheimer’s disease by 2025 – and a review of all the progress to date.

“So that this plan called for by Congress can be translated into results, Congress now must continue its leadership by supporting the additional $100 million included in the President’s fiscal year 2014 budget for the fight against Alzheimer’s.”

In addition to a clear timeline, the 2013 Update includes new details such as:

This updated version of the National Plan includes a summary of progress achieved so far as well as new goals in the areas of research, care and services. Highlights of the updated plan include additional action steps that HHS and its partners will take, such as:

The 2013 Update includes a review of accomplishments over the past year, such as:

“Congress must see to it that the necessary resources are committed to accelerate and prioritize the government’s efforts on Alzheimer’s,” said Johns. “Without these new resources, efforts in Alzheimer’s research, care and support will continue to be hampered to the determent of millions of families and the economic well-being of the nation.”