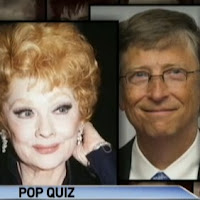 See how a new Alzheimer’s-test uses celebrity faces to detect dementia. Get the facts on this easy dementia test from Northwestern University. Find out how well it works.

MINNEAPOLIS – A new study
suggests that simple tests that measure the ability to recognize and
name famous people such as Albert Einstein, Bill Gates or Oprah Winfrey
may help doctors identify early dementia in those 40 to 65 years of age. The research appears in the August 13, 2013, print issue of Neurology®, the medical journal of the American Academy of Neurology.

“These tests also differentiate between recognizing a face and actually
naming it, which can help identify the specific type of cognitive
impairment a person has,” said study author Tamar Gefen, MS, of
Northwestern University Feinberg School of Medicine in Chicago. Gefen
worked alongside Emily Rogalski, PhD, also with Northwestern University,
for the research.

For the study, 30 people with primary progressive aphasia, a type of
early onset dementia that mainly affects language, and 27 people without
dementia, all with an average age of 62 were given a test. The test
includes 20 famous faces printed in black and white, including John F.
Kennedy, Lucille Ball, Princess Diana, Martin Luther King, Jr. and Elvis
Presley.

Participants were given points for each face they could name. If the
subject could not name the face, he or she was asked to identify the
famous person through description. Participants gained more points by
providing at least two relevant details about the person. The two groups
also underwent MRI brain scans.

Researchers found that the people who had early onset dementia performed
significantly worse on the test, scoring an average of 79 percent in
recognition of famous faces and 46 percent in naming the faces, compared
to 97 percent in recognition and 93 percent on naming for those free of
dementia.

The study also found that people who had trouble putting names to the
faces were more likely to have a loss of brain tissue in the left
temporal lobe of the brain, while those with trouble recognizing the
faces had tissue loss on both sides of the temporal lobe.

“In addition to its practical value in helping us identify people with
early dementia, this test also may help us understand how the brain
works to remember and retrieve its knowledge of words and objects,”
Gefen said.

The American Academy of Neurology, an association of more
than 26,000 neurologists and neuroscience professionals, is dedicated to
promoting the
highest quality patient-centered neurologic care. A
neurologist is a doctor with specialized training in diagnosing,
treating and managing
disorders of the brain and nervous system such as
Alzheimer’s disease, stroke, migraine, multiple sclerosis, concussion,
Parkinson’s disease and epilepsy.