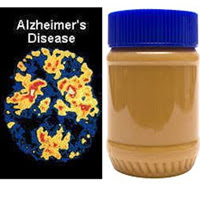 To get a definite diagnosis of Alzheimer’s requires an F18 brain scan, costing $3,000. Can the olfactory nerves’ ability to sense peanut butter offer an alternative Alzheimer’s test? It certainly seems accurate enough, at 1/1000th the cost!

GAINESVILLE, Fla. — A dollop of peanut butter and a ruler can be used to confirm a diagnosis of early stage Alzheimer’s disease, University of Florida Health researchers have found.

Jennifer Stamps, a graduate student in the UF McKnight Brain Institute Center for Smell and Taste, and her colleagues reported the findings of a small pilot study in the Journal of the Neurological Sciences.

Stamps came up with the idea of using peanut butter to test for smell sensitivity while she was working with Dr. Kenneth Heilman, the James E. Rooks distinguished professor of neurology and health psychology in the UF College of Medicine’s department of neurology.

She noticed while shadowing in Heilman’s clinic that patients were not tested for their sense of smell. The ability to smell is associated with the first cranial nerve and is often one of the first things to be affected in cognitive decline. Stamps also had been working in the laboratory of Linda Bartoshuk, the William P. Bushnell presidentially endowed professor in the College of Dentistry’s department of community dentistry and behavioral sciences and director of human research in the Center for Smell and Taste.

“Dr. Heilman said, ‘If you can come up with something quick and inexpensive, we can do it,’” Stamps said.

She thought of peanut butter because, she said, it is a “pure odorant” that is only detected by the olfactory nerve and is easy to access.

In the study, patients who were coming to the clinic for testing also sat down with a clinician, 14 grams of peanut butter — which equals about one tablespoon — and a metric ruler. The patient closed his or her eyes and mouth and blocked one nostril. The clinician opened the peanut butter container and held the ruler next to the open nostril while the patient breathed normally. The clinician then moved the peanut butter up the ruler one centimeter at a time during the patient’s exhale until the person could detect an odor. The distance was recorded and the procedure repeated on the other nostril after a 90-second delay.

The clinicians running the test did not know the patients’ diagnoses, which were not usually confirmed until weeks after the initial clinical testing.

The scientists found that patients in the early stages of Alzheimer’s disease had a dramatic difference in detecting odor between the left and right nostril — the left nostril was impaired and did not detect the smell until it was an average of 10 centimeters closer to the nose than the right nostril had made the detection in patients with Alzheimer’s disease. This was not the case in patients with other kinds of dementia; instead, these patients had either no differences in odor detection between nostrils or the right nostril was worse at detecting odor than the left one.

Of the 24 patients tested who had mild cognitive impairment, which sometimes signals Alzheimer’s disease and sometimes turns out to be something else, about 10 patients showed a left nostril impairment and 14 patients did not. The researchers said more studies must be conducted to fully understand the implications.

“At the moment, we can use this test to confirm diagnosis,” Stamps said. “But we plan to study patients with mild cognitive impairment to see if this test might be used to predict which patients are going to get Alzheimer’s disease.”

Stamps and Heilman point out that this test could be used by clinics that don’t have access to the personnel or equipment to run other, more elaborate tests required for a specific diagnosis, which can lead to targeted treatment. At UF Health, the peanut butter test will be one more tool to add to a full suite of clinical tests for neurological function in patients with memory disorders.

One of the first places in the brain to degenerate in people with Alzheimer’s disease is the front part of the temporal lobe that evolved from the smell system, and this portion of the brain is involved in forming new memories.

“We see people with all kinds of memory disorders,” Heilman said. Many tests to confirm a diagnosis of Alzheimer’s disease or other dementias can be time-consuming, costly or invasive. “This can become an important part of the evaluation process.”

I'm dismayed at how everyone has picked up on this test. According to Mayo Clinic there are over 30 causes of loss of smell. I've seen Facebook threads where people of all ages are trying this test and freaking out, which is a shame.

I agree totally with you:
For example patients of any age, mainly elderly patients that have chronic rhinitis and /or chronic sinusitis, commonly have partial or complete impairment or loss of smell .

I guess so that the study above is very interesting , and that as the authors of the trial suggests , it deserves more research .

But I guess that the concerns here , are about how some people are interpretating this study, that can leads to some type of misdiagnosis , and to awry decisions by people that are terrified with it test.

As is well known , a finding commonly seen in persistent rhinitis is chronic swelling of the mucosa of the nostrils due to inflammation leading to nasal obstruction ;

I do not put in doubt the consistency and the quality and how interesting is that research , but only how precise can it be to people use it as a common tool for diagnosis of dementia.

the difference here is the relative sense of smell between the right and left nostril and not the loss of smell generally.
Re-read the article so you more clearly grasp the context- your sense of negativity certainly isn't impaired.

I lost complete sense of smell & taste, with no alz. -o-oo-

In a very interesting article published this month (march 2014) published in the prestigeous medical Journal of Craniofacial Surgery , with the title “Lateralized Differences in Olfactory Function and Olfactory Bulb Volume Relate to Nasal Septum Deviation” we can see that up to 72% of patients with left septal deviation have lateralized nasal obstruction on olfactory bulb that leads to HYPOSMIA (partial loss of olfactory function in the obstructed nostril).
In that common cases of LEFT septal deviation with lateralized nasal obstruction, using the so called ”smell test “ someone could be misdiagnosed as having AD or some dementia . while only havING a left septal deviation.

OUR STUDY CLEARLY HIGHLIGHTS THAT SEPTAL DEVIATION RESULTS IN DECREASED OLFACTORY FUNCTION AT THE NARROWER SIDE.”
(abstract pasted from the Journal of Craniofacial Surgery-March 2014-Vol. 25 – Issue 2: p 359-362)