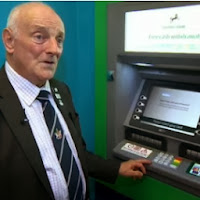 Banks can be intimidating in a world with Alzheimer’s. Pin numbers and fraud protection, long lines and lots of numbers, may call for special attention. Watch how Lloyds Banking Group and The Alzheimer’s Society are launching a landmark “Dementia-Friendly Financial Services” guide for banks and insurers. Download the guide and improve the everyday lives of people affected by dementia.

Together, Lloyds Banking Group and Alzheimer’s Society are appealing to banks, building societies, insurance companies and other financial institutions across the sector to join them in making a commitment to families affected by the condition, so that people with dementia can plan ahead, access financial services and get help to remain independent for as long as possible.

Three quarters (76 per cent) of people with dementia have difficulty using banks* and confusion over necessary legal documents such as ‘lasting power of attorney‘ often stop carers from carrying out financial decisions on behalf of their loved one. The charter lays out a number of ways financial services organisations can work towards becoming more dementia-friendly, such as appointing a ‘Champion’ to drive forward the initiative in each branch. Customers with the condition will also be given more choice, including the option to flag up to the bank that they have dementia so customer service can be tailored appropriately.

‘Since David Cameron announced his Challenge on Dementia in March, 2012, we have been working with organisations from across all sectors to help make their operations more dementia-friendly. Innovations in finance have undoubtedly led to greater convenience for customers, but all too often we hear that people with dementia feel locked out of their own finances. Lloyds Banking Group, working with others, is leading the way for the financial services industry in order to change this picture.

‘Lloyds Banking Group has recognised its responsibility to customers affected by dementia and is taking positive steps towards improving the service offered to people with the condition and their carers. Alzheimer’s Society would like to see the whole financial services sector signing up to the charter, so that managing money does not add to the list of worries people with dementia and their carers can often face.’

As well as the charter, Lloyds Banking Group has developed a training programme to help colleagues understand the barriers faced by people with dementia and the small things they can do to help. Over the last few months, this training has been rolled out to thousands of its colleagues.
António Horta-Osório, Group Chief Executive, Lloyds Banking Group said:

‘By embedding the principles of the charter in our working practices and training our staff in dementia awareness, we aim to help make day-to-day life easier for people with dementia and their carers. Not only will this help us further deliver upon our commitment to better serve the needs of our customers, it also helps us deliver our promise of helping our communities and Britain prosper.’

Lloyds Banking Group has been leading a steering group made up 24 other financial services organisations who have all committed to improving dementia-awareness amongst their employees, as well as securing interest from the British Banker’s Association, Building Societies Association and the Association of British Insurers.

Dr Trevor Jarvis, 72, was diagnosed with dementia in 2001 and features on the Lloyds Banking Group training video. He said:

‘I’ve got dementia but there are no physical signs and it’s not written across my forehead. Wherever I go, I have to explain that I’ve got dementia and what that means I can and can’t do. I can’t remember PIN numbers, so I have signature card and I find reading causes me problems now, so interpreting complex documents can be tricky.

‘It’s great Lloyds Banking Group has recognised the need to do more to help people like me. As more people develop the condition, it’s vital that staff in banks understand dementia so they can support us to remain independent and make decisions about our financial future.’

Since January this year, Lloyds Banking Group has been working in partnership with Alzheimer’s Society and Alzheimer Scotland to raise money to help improve the lives of thousands of people with dementia and their carers. They have already raised over £1.5million, which is funding the pioneering ‘Live Well‘ programme, aimed at educating people with dementia, their carers and families about how to cope with day to day life and how to plan for the future.