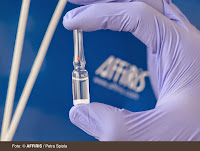 The Alzheimer’s drugs on the market today help compensate for the problems caused by Alzheimer’s. However, they do not stop the disease or change its course. AD04 by AFFiRiS promises to change all that. In clinical trials, it was able to modify the course of Alzheimer’s, potentially changing the face of Alzheimer’s treatment.

AFFiRiS announced the results of a phase II study in Alzheimer’s patients. AFFiRiS’ proprietary compound AD04 is the first drug ever to demonstrate clinical and biomarker effects consistent with disease modification in Alzheimer’s patients. Upon treatment with AD04, effects consistent with disease modification were achieved for at least 18 months in 47 % of treated patients. This beneficial effect was dose dependent and more effective in early disease patients. Furthermore, prevention of hippocampal decline was correlated with the beneficial impact on clinical progression and was statistically significant. Therefore, these results for the very first time meet all of the criteria for disease modification as defined by US and European Regulatory Agencies FDA (Food and Drug administration) and EMA (European Medicines Agency).

The remarkable results of AFFiRiS’ clinical phase II study in Alzheimer’s patients of AD04 demonstrate the impressive therapeutic effect of AD04. The results also make it the first ever compound demonstrating clinical and biomarker evidence consistent with disease modification of Alzheimer’s disease. A statistically significant correlation was demonstrated between the cognitive/functional outcome and the volume of the hippocampus, the region of the brain locating the cognitive/memory functions, both of which demonstrated positive impact on disease progression over 18 months. Similar stabilization was also seen across behavioral and quality of life outcomes.

There was also a stabilization of the cognitive/functional endpoint found in those patients of this study who were treated with AD02, so far the company’s lead compound in AD. Dependent on dosage and formulation of AD02 in three different study arms, 24 – 31 % of the patients showed cognitive/functional stabilization or improvement. However, statistically significant correlation with biomarker Hippocampus volume could not be demonstrated within the observation period of 18 months. Altogether 332 patients were treated in an international multi-centric clinical trial into five different study arms, and over 85 % completed the study.

“Our results demonstrate that AD04 is the first drug ever to show disease modifying properties in Alzheimer’s patients. This success is owed to our strategy of clinical maturation, which in the case of Alzheimer’s has so far moved forward four different product candidates namely AD01 – AD04 into clinical development.”

“Both compounds applied in this trail, AD02 and AD04, showed excellent safety profiles. Top compound AD02 performed very well in stabilization of cognitive functions in a dose dependent manner. 24 – 31 % of treated patients showed stabilization of clinical progression. However, AD04 turned out to be superior to AD02 as 47 % of the patients stabilized regarding their cognitive/ functional status. On top of this, this effect was statistically significantly correlated with the rescue of the hippocampus, the region of the human brain, where cognitive and memory functions are located (p=0.0016). This correlation of significant clinical and biomarker effects meets EMA’s and FDA’s definition of disease modification in the context of a compound with a consistent mode of action. Therefore, we decided to have a strong focus on AD04 for further clinical development. Our strategy of clinical maturation allows for an efficient progress during clinical development. By doing so, it reduces financial risks associated with any clinical trial.”

In fact, the clinical maturation strategy has been established by AFFiRiS and is based on parallel clinical testing of several drug candidates against a certain disease to ensure that the best therapy for humans will be developed.

“From the beginning we were running our Alzheimer’s therapy program with several drug candidates. AD04 now shows the most convincing therapeutic benefits including an effect on NPI and quality of life, which are relevant to patients and their caregivers. Because the current results are so extremely positive and consistent across clinical outcomes and brain volumes we expect to verify them in further clinical investigations.”

Additional Programs
In addition to its Alzheimer’s therapy program AFFiRiS’ pipeline contains product candidates against Parkinson, Atherosclerosis, Diabetes and several other conditions. Dr. Mattner comments: "AFFiRiS focuses on the development of drugs against conditions with urgent requirement for new treatments and attractive market volumes. Our Alzheimer’s and our Parkinson developments are successful examples for this. Indeed AFFiRiS was the first company world-wide that started clinical testing of Parkinson drug with the potential for disease modification. Eagerly awaited results of this clinical trial will be released within the next two months."

About AFFiRiS AG
Based on its proprietary IP positions AFFiRiS develops tailor-made drugs mainly as Peptide-based vaccines. Target diseases include Alzheimer’s, Parkinson, Diabetes and other indications with attractive markets and unmet medical need. Alzheimer’s is the lead indication.

AFFiRiS is located at the campus of the Vienna Biocenter, Vienna Austria and employs 95 highly qualified employees.

Before y'all get hysterical with hope … there's a lot of skepticism about this trial. AD04 was the PLACEBO for a clinical trial on AD02. The two compounds are unrelated, and AFFiRiS has no idea why AD04 would have any effect on Alzheimer's. The first thing they plan on doing is … patent it. Then see if they can figure out what might have happened. And then, they may think about additional clinical trials. See:

What happens when the placebo you use in an Alzheimer's study turns out to work better than your drug? Why, you call it a breakthrough for patients and then decline to answer any detailed questions about it. That appears to sum up the approach at Affiris AG. Cormac Sheridan at BioWorld notes that Affiris's placebo arm, given a substance called AD04, did remarkably well in a Phase II study. In fact, the biotech claimed that 47% of the patients in the AD04 arm demonstrated signs of disease modification. Its drug AD02 didn't fare as well. "You can't achieve that by a placebo effect. This is something that is real and that is defined by the EMA and the FDA as a prerequisite for disease modification," Affiris CEO and co-founder Walter Schmidt told BioWorld Today. Schmidt, though, was less forthcoming about details on AD04, which will have to wait for now. Other Alzheimer's drugs have looked promising in Phase II, perhaps most notably Medivation's Dimebon, which was partnered with Pfizer ($PFE) in a rich deal that foundered when the drug ended up Phase III looking like, well, a placebo.