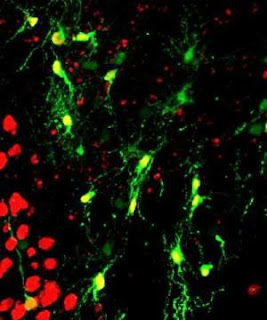 Penn State’s Professor Chen has developed an innovative model of regenerating neurons in Alzheimer’s. Learn how Dr. Chen hopes to develop this further in the years ahead. Find out how this may ultimately offer Alzheimer’s patients the ability to have fresh memories after regenerating new neurons.

Researchers at Penn State University have developed an innovative technology to regenerate functional neurons after brain injury, and also in model systems used for research on Alzheimer’s disease. The scientists have used supporting cells of the central nervous system, glial cells, to regenerate healthy, functional neurons, which are critical for transmitting signals in the brain.

Gong Chen, a professor of biology, the Verne M. Willaman Chair in Life Sciences at Penn State, and the leader of the research team, calls the method a breakthrough in the long journey toward brain repair. “This technology may be developed into a new therapeutic treatment for traumatic brain and spinal cord injuries, stroke, Alzheimer’s disease, Parkinson’s disease, and other neurological disorders,” Chen said. The research is posted online in the journal Cell Stem Cell.

When the brain is harmed by injury or disease, neurons often die or degenerate, but glial cells become more branched and numerous. These “reactive glial cells” initially build a defense system to prevent bacteria and toxins from invading healthy tissues, but this process eventually forms glial scars that limit the growth of healthy neurons. “A brain-injury site is like a car-crash site,” Chen explained. “Reactive glial cells are like police vehicles, ambulances, and fire trucks immediately rushing in to help — but these rescue vehicles can cause problems if too many of them get stuck at the scene. The problem with reactive glial cells is that they often stay at the injury site, forming a glial scar and preventing neurons from growing back into the injured areas,” he explained. 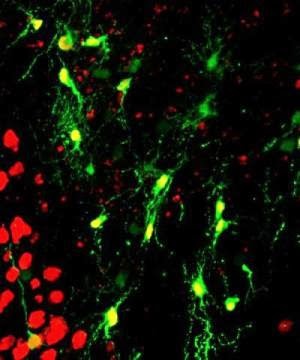 The scientists have used supporting cells of the central nervous system, glial cells, to regenerate healthy and functional neurons, shown in green in this image in the brain of a mouse with Alzheimer’s disease. The red areas are the stained nuclei of neuron cells. (Credit: Gong Chen lab, Penn State University)

So several years ago, Chen’s lab tested new ways to transform glial scar tissue back to normal neural tissue. “There are more reactive glial cells and fewer functional neurons in the injury site,” Chen said, “so we hypothesized that we might be able to convert glial cells in the scar into functional neurons at the site of injury in the brain. This research was inspired by the Nobel prize-winning technology of induced pluripotent stem cells (iPSCs) developed in Shinya Yamanaka’s group, which showed how to reprogram skin cells into stem cells,” Chen recalled.

Chen and his team began by studying how reactive glial cells respond to a specific protein, NeuroD1, which is known to be important in the formation of nerve cells in the hippocampus area of adult brains. They hypothesized that expressing NeuroD1 protein into the reactive glial cells at the injury site might help to generate new neurons — just as it does in the hippocampus. To test this hypothesis, his team infected reactive glial cells with a retrovirus that specifies the genetic code for the NeuroD1 protein. “The retrovirus we used is replication-deficient and thus cannot kill infected cells like other viruses found in the wild,” Chen said. “More importantly, a retrovirus can infect only dividing cells such as reactive glial cells, but it does not affect neurons, which makes it ideal for therapeutic use with minimal side effect on normal brain functions.”

In a first test, Chen and his team investigated whether reactive glial cells can be converted into functional neurons after injecting NeuroD1 retrovirus into the cortex area of adult mice. The scientists found that two types of reactive glial cells — star-shaped astroglial cells and NG2 glial cells — were reprogrammed into neurons within one week after being infected with the NeuroD1 retrovirus. “Interestingly, the reactive astroglial cells were reprogrammed into excitatory neurons, whereas the NG2 cells were reprogrammed into both excitatory and inhibitory neurons, making it possible to achieve an excitation-inhibition balance in the brain after reprogramming,” Chen said. His lab also performed electrophysiological tests, which demonstrated that the new neurons converted by the NeuroD1 retrovirus could receive neurotransmitter signals from other nerve cells, suggesting that the newly converted neurons had successfully integrated into local neural circuits.

In a second test, Chen and his team used a transgenic-mouse model for Alzheimer’s disease, and demonstrated that reactive glial cells in the mouse’s diseased brain also can be converted into functional neurons. Furthermore, the team demonstrated that even in 14-month-old mice with Alzheimer’s disease — an age roughly equivalent to 60 years old for humans — injection of the NeuroD1 retrovirus into a mouse cortex can still induce a large number of newborn neurons reprogrammed from reactive glial cells. “Therefore, the conversion technology that we have demonstrated in the brains of mice potentially may be used to regenerate functional neurons in people with Alzheimer’s disease,” Chen said.

To ensure that the glial cell-to-neuron conversion method is not limited to rodent animals, Chen and his team further tested the method on cultured human glial cells. “Within 3 weeks after expression of the NeuroD1 protein, we saw in the microscope that human glial cells were reinventing themselves: they changed their shape from flat sheet-like glial cells into normal-looking neurons with axon and dendritic branches,” Chen said. The scientists further tested the function of these newly converted human neurons and found that, indeed, they were capable of both releasing and responding to neurotransmitters.

“Our dream is to develop this in vivo conversion method into a useful therapy to treat people suffering from neural injury or neurological disorders,” Chen said. “Our passionate motivation for this research is the idea that an Alzheimer’s patient, who for a long time was not able to remember things, could start to have new memories after regenerating new neurons as a result of our in vivo conversion method, and that a stroke victim who could not even move his legs might start to walk again.”

"Our idea is that an Alzheimer's patient, could start to have new memories after regenerating new neurons"

However, the old memories is where the 'person' exists.
Sure make new cells and maybe new memories, but the personality, talents and essence of the victim will be gone forever. If the hard drive was damaged/erased maybe you can install a new hard drive, but the DATA is gone forever!
Tragically, the human experience does not allow for backing up the data. 🙁

If my (young) husband could learn once, he could learn again. I'm sure he would rather be able to speak, write, love, travel, recognize, etc, with some hard work than remain the vegetable he is today – I would pray for the opportunity to regenerate some healthy cells that could be useful. What we have are dead cells that are never coming back anyway.
If you lost all your beautiful blonde hair, wouldn't you give anything to have gorgeous brunette locks?