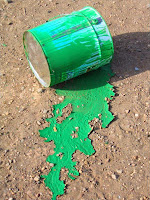 At work, we are sometimes exposed to paint, glue or degreaser fumes. Learn why protection is essential, as people may experience memory and thinking problems in retirement, decades after their exposure

MINNEAPOLIS – People who are exposed to paint, glue or degreaser fumes at work may experience memory and thinking problems in retirement, decades after their exposure, according to a study published in the May 13, 2014, print issue of Neurology®, the medical journal of the American Academy of Neurology.

“Our findings are particularly important because exposure to solvents is very common, even in industrialized countries like the United States.” said study author Erika L. Sabbath, ScD, of Harvard School of Public Health in Boston. “Solvents pose a real risk to the present and future cognitive health of workers, and as retirement ages go up, the length of time that people are exposed is going up, too.”

The research found that people with high, recent exposure to solvents were at greatest risk for memory and thinking deficits. For example, those with high, recent exposure to chlorinated solvents were 65 percent more likely to have impaired scores on tests of memory and visual attention and task switching than those who were not exposed to solvents. The results remained the same after accounting for factors such as education level, age, smoking and alcohol consumption.

“The people with high exposure within the last 12 to 30 years showed impairment in almost all areas of memory and thinking, including those not usually associated with solvent exposure,” Sabbath said. “But what was really striking was that we also saw some cognitive problems in those who had been highly exposed much longer ago, up to 50 years before testing. This suggests that time may not fully lessen the effect of solvent exposure on some memory and cognitive skills when lifetime exposure is high.”

Sabbath said the results may have implications for policies on workplace solvent exposure limits. “Of course, the first goal is protecting the cognitive health of individual workers. But protecting workers from exposure could also benefit organizations, payers, and society by reducing workers’ post-retirement health care costs and enabling them to work longer,” said Sabbath. “That said, retired workers who have had prolonged exposure to solvents during their career may benefit from regular cognitive screening to catch problems early, screening and treatment for heart problems that can affect cognitive health, or mentally stimulating activities like learning new skills.”

The study, which used data from the GAZEL cohort, was supported by INSERM, French National Research Agency and the French Agency for Sanitary Security of Environment and Work. To learn more about cognition, please visit www.aan.com/patients.

The American Academy of Neurology, an association of more than 27,000 neurologists and neuroscience professionals, is dedicated to promoting the highest quality patient-centered neurologic care. A neurologist is a doctor with specialized training in diagnosing, treating and managing disorders of the brain and nervous system such as Alzheimer’s disease, stroke, migraine, multiple sclerosis, concussion, Parkinson’s disease and epilepsy.

My husband has been using solvents for years. He used to lay flooring (carpets, tiles, vinyls, etc) and in the most recent 30 or so years, he has been an automotive spraypainter. He was diagnosed with Alzheimer's Disease in February 2013. Only recently have a number of people thought that this may be part of the cause of his diagnosis. He is 68 years old (he was 66 when diagnosed). So, all you painters out there – BEWARE. It might happen to you.

I worked with solvents at a chemical plant abbott lab in north Chicago il. I was diagnosed with ALZ DEC 2014 I am now 55 maybe if we get more we can do something I worked with a wide array of chemicals for yrs there

As Christmas of 2013 I was diagnosed with early onset Alzheimer's at age of 53 NO body in my family tree has or has had ALZ. I Worked for 27 yrs a Abbott Laboratories in north Chicago il in the chemical division working with bulk solvents. we sent abbott a packet of info and medical records of my condition they sent it to Workmen's Comp. and between the two of them did not take responsibility for my situation also basically swept it under the rug I am like a little fly flyin around living with this death sentence. Who at my age gets ALZ