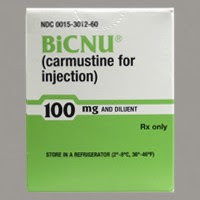 Florida researchers noticed that people with cancer tended not to get Alzheimer’s disease. So, FDA approved anti-cancer drugs were screened to see how well they reduce Alzheimer’s plaque. Learn how carmustine stands out, decreasing amyloid β levels by 75%.

Long term treatment by carmustine, a chemical relative of mustard gas and already used to treat some types of brain cancer, can decrease the amount of amyloid β and number of amyloid plaques in a mouse model of Alzheimer’s disease. The research is published in Biomed Central’s open access journal BMC Medicine.

Alzheimer’s disease progressively destroys memory, language, and judgement of affected people. While deaths due to heart disease, stroke and cancer may be decreasing, the number of deaths each year due to Alzheimer’s disease is on the increase. Accumulation of amyloid β plaques can be seen in the brain from early stages, even though the exact relationship between these plaques and Alzheimer’s disease has not yet been firmly established.

Noticing that people with cancer tended not to get Alzheimer’s disease, and vice versa, researchers from the Florida based Torrey Pines Institute for Molecular Studies screened a library of all FDA approved anti-cancer drugs for their ability to reduce amyloid β levels in cells expressing amyloid precursor protein. From this screen they found that carmustine could decrease conversion of precursor protein to amyloid β levels by 60%.When tested in a mouse model of Alzhiemer’s disease, long term treatment with carmustine was able to reduce amyloid β levels by 75%.

Discussing how this research could translate to humans, Dr. Madepalli Lakshmana, who led this study commented,

“The level of carmustine needed to achieve reduction in amyloid β is much lower than the dose already used in the treatment of some types of brain cancer. Also carmustine does not appear to act by activating microglia or by blocking secretases which reduces possible side effects seen with other anti-amyloid investigational new drugs. While more work still needs to be done, carmustine appears to be a powerful candidate drug for treatment and prevention of Alzheimer’s disease.”

2. BMC Medicine is the flagship medical journal of the BMC series, publishing original research, commentaries and reviews that are either of significant interest to all areas of medicine and clinical practice, or provide key translational or clinical advances in a specific field.

3. BioMed Central is an STM (Science, Technology and Medicine) publisher which has pioneered the open access publishing model. All peer-reviewed research articles published by BioMed Central are made immediately and freely accessible online, and are licensed to allow redistribution and reuse. BioMed Central is part of Springer Science+Business Media, a leading global publisher in the STM sector.