A new study suggests that triheptanoin, a synthetic MCT oil, may provide hope for people with Huntington’s dementia.

Triheptanoin is an MCT (Medium Chain Triglyceride) oil. The synthetic oil appears to increase the efficacy of the ketogenic diet as a treatment for certain brain disorders. Triheptanoin produces helpful ketone bodies with five carbon atoms. These ketone bodies easily cross the blood–brain barrier and enter the brain.

An early study suggests that a synthetic triglyceride oil called triheptanoin may provide hope for people with Huntington’s disease. The study is published in the online issue of Neurology®, the medical journal of the American Academy of Neurology. 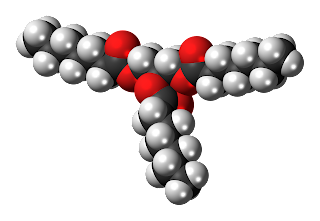 Huntington’s disease is inherited and causes nerve cells to break down in the brain, especially areas involved in the control of movements, memory and thinking abilities, and emotions and behavior. A child of a parent with Huntington’s disease has a 50 percent chance of developing the disease. Symptoms usually appear between the ages of 30 to 50.

“Our study suggests that this drug in the form of oil may be able to improve the brain metabolic profile in early stages of the disease,” said study author Fanny Mochel, MD, PhD, with Pitié-Salpêtrière University hospital in Paris, France. “Although the results should be taken with great caution because researchers and participants in the study knew whether or not they were getting the drug, we saw improvement in movement and motor skills in people with Huntington’s after one month of therapy.”

For the study, researchers used MRI brain scans to analyze the energy profile before, during and after the brain was visually stimulated in nine people in the early stages of Huntington’s disease and 13 people without the disease. The average age of the participants was 46. The test was then repeated one month later. In the people without the disease, the brain’s metabolism increased during the stimulation, then returned to the normal level. In people with Huntington’s disease, there was no change in metabolism.

For the second part of the study, only people with Huntington’s disease received triheptanoin, a compound made up of special fatty acids that can provide alternative energy to glucose in the brain. The 10 participants, which included five of the participants in the first part of the study, had the flavorless, odorless oil during meals three or four times a day for a month. Then they had the visual stimulation test again. The brain metabolism was now normal.

“If confirmed in other studies, the findings may be hopeful for people who have the family gene for Huntington’s and will eventually develop the disease,” Mochel said.

The study was supported by Ipsen and the French National Institute of Health and Research. Ultragenyx Pharmaceutical Inc. provided the investigational drug triheptanoin for the study.