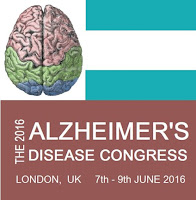 The 2016 Alzheimer’s Disease Congress will take place in London on the 7th through the 9th of June, 2016. Find out more.

Alzheimer’s Disease has been recognised as the most prevalent form of dementia; an ever-growing issue in an ageing society. Over three days the Alzheimer’s Disease summit will discuss many aspects of disease progression, development and treatment in an informal academic setting. Topics for discussion include prediction and prevention strategies, vaccine development, drug discovery and care. With plenty of opportunity for networking and debate, this informal international meeting will bring you up to date with current research and thinking regarding Alzheimer’s Disease.

– Inflammation in Dementia with Lewy bodies and Alzheimer’s Disease

– Exploring the Glutamatergic Hypothesis for the Pathogenesis of Down Syndrome: Potential Lessons for our Understanding of Alzheimer’s Disease.

– How to Improve Care for Dementia Patients

– c-Abl signaling in Alzheimer’s disease and other Neurodegenerative diseases: Projections for drugs searching

– Psychological treatments for depression and anxiety in dementia and mild cognitive impairment: systematic review and meta-analysis

– Ventriculomegaly effect on cognition and gait

– The regulation of metastable proteins in neurodegenerative diseases

– Multiple roles of cholinergic neurons in the modulation of amyloid production

– Associations of sorLA/SORL1 with Alzheimers disease

– The MTDL molecules, a pharmacological approach for Alzheimer´s disease

– The role of Pb in AD pathogenesis