WNT Signaling May Explain Low Rates of Cancer in Alzheimer’s

RESEARCH has long shown that patients with cancer are at reduced risk of developing Alzheimer’s, and vice versa. What wasn’t known is that Wnt signaling was involved in that link. Learn how.

JACKSONVILLE, Fla. — Researchers at Jacksonville’s campus of Mayo Clinic have discovered a defect in a key cell-signaling pathway they say contributes to both overproduction of toxic protein in the brains of Alzheimer’s disease patients as well as loss of communication between neurons — both significant contributors to this type of dementia. 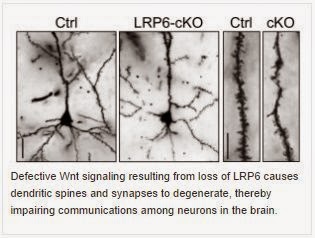 Their study, in the online issue of Neuron, offers the potential that targeting this specific defect with drugs "may rejuvenate or rescue this pathway," says the study’s lead investigator, Guojun Bu, Ph.D., a neuroscientist at Mayo Clinic, Jacksonville, Fla.

"This defect is likely not the sole contributor to development of Alzheimer’s disease, but our findings suggest it is very important, and could be therapeutically targeted to possibly prevent Alzheimer’s or treat early disease," he says.

The pathway, Wnt signaling, is known to play a critical role in cell survival, embryonic development and synaptic activity — the electrical and chemical signals necessary for learning and memory. Any imbalance in this pathway (too much or too little activity) leads to disease — the overgrowth of cells in cancer is one example of overactivation of this pathway. 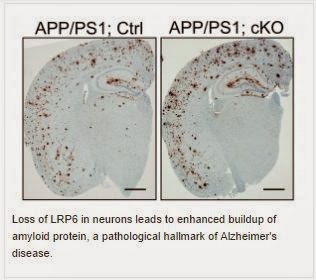 While much research on Wnt has focused on diseases involved in overactive Wnt signaling, Dr. Bu’s team is one of the first to demonstrate the link between suppressed Wnt signaling and Alzheimer’s disease.

"Our finding makes sense, because researchers have long known that patients with cancer are at reduced risk of developing Alzheimer’s disease, and vice versa," Dr. Bu says. "What wasn’t known is that Wnt signaling was involved in that dichotomy."

Using a new mouse model, the investigators discovered the key defect that leads to suppressed Wnt signaling in Alzheimer’s. They found that the low-density lipoprotein receptor-related protein 6 (LRP6) is deficient, and that LRP6 regulates both production of amyloid beta, the protein that builds up in the brains of AD patients, and communication between neurons. That means lower than normal levels of LRP6 leads to a toxic buildup of amyloid and impairs the ability of neurons to talk to each other.

The researchers validated their findings by examining postmortem brain tissue from Alzheimer’s patients — they found that LRP6 levels were deficient and Wnt signaling was severely compromised in the human brain they examined.

The Good News Is…

The good news is that specific inhibitors of this pathway are already being tested for cancer treatment. "Of course, we don’t want to inhibit Wnt in people with Alzheimer’s or at risk for the disease, but it may be possible to use the science invested in inhibiting Wnt to figure out how to boost activity in the pathway," Dr. Bu says.

"Identifying small molecule compounds to restore LRP6 and the Wnt pathway, without inducing side effects, may help prevent or treat Alzheimer’s disease," he says. "This is a really exciting new strategy — a new and fresh approach."

This research was primarily supported by research grants from the National Institutes of Health (R01AG027924, R01AG035355,R01AG046205, P01AG030128, and P01NS074969), Alzheimer’s Association and the Mayo Clinic Center for Regenerative Medicine Career Development Award.

About Mayo Clinic:
Recognizing 150 years of serving humanity in 2014, Mayo Clinic is a nonprofit worldwide leader in medical care, research and education for people from all walks of life. For more information, visit mayoclinic.org, MayoClinic.org or newsnetwork.mayoclinic.org.