2 Ways Too Much Copper Accelerates Alzheimer’s 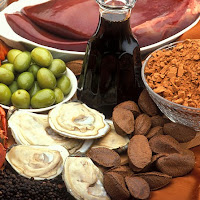 Copper hits the brain with a double-punch. It inhibits clearance of, AND stimulates production of, Alzheimer’s plaque. See strong evidence that copper is a key player in Alzheimer’s disease.

Copper appears to be one of the main environmental factors that trigger the onset  and enhance the progression of Alzheimer’s disease by preventing the clearance and accelerating the accumulation of toxic proteins in the brain. That is the conclusion of a study appearing in the journal Proceedings of the National Academy of Sciences.

Amyloid beta is a toxic protein that lies at the center of what goes wrong in Alzheimer’s disease. If not properly cleared, or if too much is produced, amyloid plaque accumulates in Alzheimer’s, forming a plaque that jams up the brain.

“It is clear that, over time, copper’s cumulative effect is to impair the systems by which amyloid beta is removed from the brain,” said Rashid Deane, Ph.D., a research professor in the University of Rochester Medical Center (URMC) Department of Neurosurgery, member of the Center for Translational Neuromedicine, and the lead author of the study.  “This impairment is one of the key factors that cause the protein to accumulate in the brain and form the plaques that are the hallmark of Alzheimer’s disease.”

Copper’s presence in the food supply is ubiquitous.   It is found in drinking water carried by copper pipes, nutritional supplements, and in certain foods such as red meats, shellfish, nuts, and many fruits and vegetables. The mineral plays an important and beneficial role in nerve conduction, bone growth, the formation of connective tissue, and hormone secretion.

However, the new study shows that copper can also accumulate in the brain and cause the blood brain barrier – the system that controls what enters and exits the brain – to break down, resulting in the toxic accumulation of the protein amyloid beta, a by-product of cellular activity.

Using both mice and human brain cells Deane and his colleagues conducted a series of experiments that have pinpointed the molecular mechanisms by which copper accelerates the pathology of Alzheimer’s disease.

The research team “dosed” normal mice with copper over a three month period. The exposure consisted of trace amounts of the metal in drinking water and was one-tenth of the water quality standards for copper established by the Environmental Protection Agency.

“These are very low levels of copper, equivalent to what people would consume in a normal diet.” said Deane.

The researchers found that the copper made its way into the blood system and accumulated in the vessels that feed blood to the brain, specifically in the cellular “walls” of the capillaries. These cells are a critical part of the brain’s defense system and help regulate the passage of molecules to and from brain tissue.  In this instance, the capillary cells prevent the copper from entering the brain. However, over time the metal can accumulate in these cells with toxic effect.

The researchers observed that the copper disrupted the function of LRP1 through a process called oxidation which, in turn, inhibited the removal of amyloid beta from the brain. They observed this phenomenon in both mouse and human brain cells.

The researchers then looked at the impact of copper exposure on mouse models of Alzheimer’s disease. In these mice, the cells that form the blood brain barrier have broken down and become “leaky” – a likely combination of aging and the cumulative effect of toxic assaults – allowing elements such as copper to pass unimpeded into the brain tissue. They observed that the copper stimulated activity in neurons that increased the production of amyloid beta. The copper also interacted with amyloid beta in a manner that caused the proteins to bind together in larger complexes creating logjams of the protein that the brain’s waste disposal system cannot clear.

This one-two punch, inhibiting the clearance and stimulating the production of amyloid beta, provides strong evidence that copper is a key player in Alzheimer’s disease.  In addition, the researchers observed that copper provoked inflammation of brain tissue which may further promote the breakdown of the blood brain barrier and the accumulation of Alzheimer’s-related toxins.

However, because metal is essential to so many other functions in the body, the researchers say that these results must be interpreted with caution.

“Copper is an essential metal and it is clear that these effects are due to exposure over a long period of time,” said Deane. “The key will be striking the right balance between too little and too much copper consumption. Right now we cannot say what the right level will be, but diet may ultimately play an important role in regulating this process.”

The dipeptide Carnosine (a complex of the aminoacids histidine and betalanine),found in the muscle of chicken breast,is a natural and safe heavy metal chelator (chelates excess of copper and zinc,for example).We can find Carnosine too in capsules od Carnosine with doses of 80 (eighty) miligrams made in compounding pharmacies Only under physician prescription.
According the author ,professor Hipkiss , in the article with the title “Carnosine and Its possible Roles In Nutrition And Health” we can read that: ”Carnosine's possible biological activities include scavenger of reactive oxygen species (ROS) and reactive nitrogen species (RNS), CARNOSINE IS A CHELATOR OF ZINC AND COPPER IONS, and antiglycating and anticross-linking activities.”
– In the article published in the Journal Chemistry Biological Interact. 2011 , with the title : “ Carnosine and Neocuproine as Neutralizing Agents for Copper Overload-Induced Damages in Cultured Human Cells “ (Authors : professors Arnal and colleagues) we can read that : In summary we can read that : “As a consequence of copper pollution, people are involuntarily exposed to a copper overload under sub-clinical and sub-symptomatological conditions, which may be very difficult to detect. Thus, we investigated the possible use of the chelator molecules CARNOSINE to Prevent the Copper Overload-induced Damage in human cell cultures . Simultaneous treatment with Copper and CARNOSINE indicated that Carnosine is More Efficient in Protecting cells from Copper toxicity that could decrease the cellular viability”.
– In another article published in the Journal of Neurochemistry, 2002 (Authors professor Coddou and colleagues ) with the title:“ Formation of CARNOSINE-COPPER complexes Prevents and Reverts the Inhibitory Action of Copper in P2X4 and P2X7 receptors (CARNOSINE prevents copper toxicity).” In summary , we can read that : “ Carnosine prevents and reverts copper toxicity ,without altering the physiology as compared to exogenous metal chelators. We hypothesize that carnosine highlights its possible therapeutic use in the treatment of copper intoxications.

We can find more about CARNOSINE (it is Not carnitine but is Carnosine), searching in Google with the words :

And searching in Google with the words :

Molybdenum as found in dietary supplements also helps remove excess copper from the body. It has been used for copper poisoning in sheep for years.

I really don't know if there is currently any way to tell for certain.