Dementia & Osteoporosis – One Drug for Both 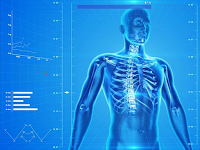 MEDICATION: The most common drug for Alzheimer’s also increases bone mass in mice. Find out what this means for people with dementia in fear of bone fractures, as well as conditions like osteoporosis or periodontitis.

The most common drug used to treat Alzheimer’s disease increases bone mass in mice, according to a groundbreaking research article published in the open access journal Heliyon. The authors of the study, from Saitama Medical University in Japan, say this means the drug could also be used to treat bone loss diseases like osteoporosis and periodontitis, following further clinical research.

Alzheimer’s disease is the most common form of dementia and the incidence is increasing in our aging population. In the early stages of Alzheimer’s disease, bone density decreases, putting patients at a higher risk of bone fractures.

"We think that donepezil can improve cognitive function and increase bone mass, making it a very useful drug for patients with dementia and osteoporosis," said lead author Dr. Tsuyoshi Sato, Associate Professor in the Department of Oral and Maxillofacial Surgery, Saitama Medical University. "From the viewpoint of medical economics, this dual purpose could reduce the cost of treating these diseases."

The most common drug used to treat Alzheimer’s disease, donepezil, stops acetylcholinesterase from working, leading to an increase in the amount of acetylcholine in the brain. Recent retrospective clinical studies have suggested that patients being treated with donepezil for Alzheimer’s disease have a lower risk of hip fracture, and that risk was dependent on the dose they were taking.

The team also looked at the effect of the drug in a mouse model with bone loss. They found that donepezil increases bone mass in mice by preventing the production of osteoclasts.

"Our findings are very promising and suggest that there is a role for donepezil in increasing bone mass in elderly patients with inflammation and dementia," said Dr. Sato. "There is still work to be done and we look forward to observing the effect of this drug in patients."

The team now plans to work with the Department of Neurology at Saitama Medical University on clinical research. They plan to study whether taking donepezil reduces patients’ risk of bone fracture by looking at its effect in a group of patients compared to a control group.

Drs just took my wife off donepezil,she has dementia.

What was the reason?

Drs just took my wife off donepezil,she has dementia.

slowed her heart down.