SOMERSET, N.J. — It is well-established that untreated hearing loss can lead to an acceleration of cognitive problems. An important study in the Journal of the American Geriatrics Society shows that wearing hearing aids reduces cognitive decline associated with hearing loss. 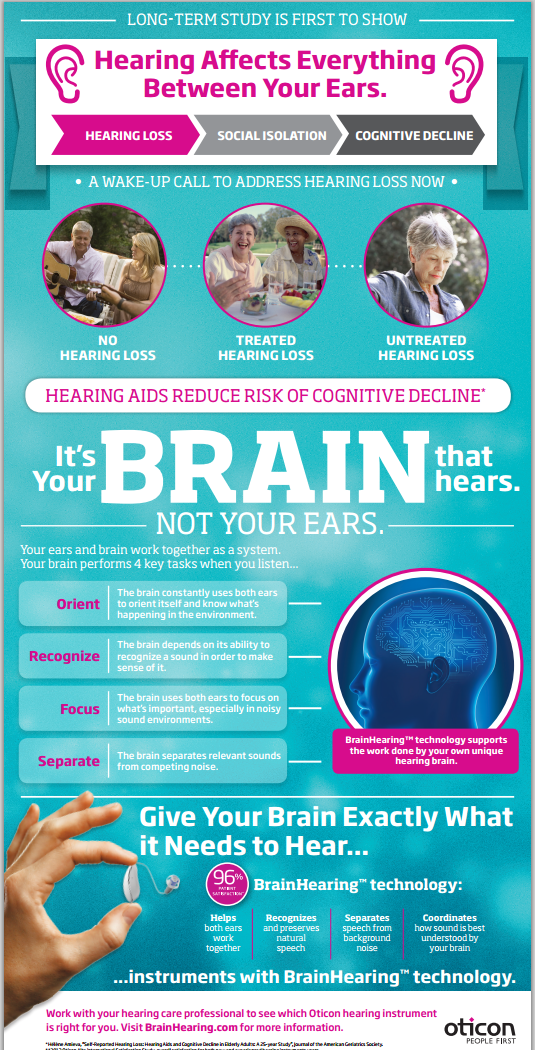 The study, “Self-Reported Hearing Loss: Hearing Aids and Cognitive Decline in Elderly Adults: A 25-year Study”, followed 3,670 adults, age 65 and older over a 25-year period. Professor Hélène Amieva, a leading researcher in the Neuropsychology and Epidemiology of Aging at the University of Bordeaux, France, headed up the study which was part of the Personnes Agèes QUID cohort (PAQUID), a cohort specifically designed to study brain aging.

Researchers compared the trajectory of cognitive decline among older adults who were using hearing aids and those who were not. The study found no difference in the rate of cognitive decline between a control group of people with no reported hearing loss and people with hearing loss who used hearing aids. By contrast, hearing loss was significantly associated with lower baseline scores on the Mini-Mental State Examination (MMSE), a well-recognized test of cognitive function, during the 25-year follow-up period, independent of age, sex and education.

A number of studies have shown correlations between hearing loss and greater risk of cognitive decline in older adults, including a pair of studies out of Johns Hopkins that found hearing loss is associated with accelerated cognitive decline and possibly also with the onset of dementia in older adults. The vast majority of scientists in the area have agreed that cognitive decline is likely related to the lack of social interaction that older adults have because of their hearing loss. The assumption has been that if people use hearing aids and thus become socially active again or are able to maintain an appropriate level of social activity then they would decrease their risk of a more rapid decline in cognitive skills. The new study appears to corroborate those assumptions.

The link to dementia is more complex. One of the most likely explanations is that the cognitive decline associated with hearing loss adds to the decline due to Alzheimer’s disease and thereby leads to crossing the threshold for the diagnosis of dementia at an early point in time.

“The transition from sound to meaning happens in the brain,” explains Dr. Schum. “When hearing is compromised, such as with hearing loss, the sound signal that the brain is accustomed to processing is different and it takes more effort to fill in the blanks. This is why hearing loss can be so tiring and can drain the mental energy people need for everyday activities. People may respond by withdrawing socially because it’s just too exhausting to try to keep up. Social isolation and the resulting depression and health issues have long been recognized as increased risk factors for dementia and Alzheimer’s disease.”

Hearing loss is the most common chronic health condition affecting older adults. The PAQUID study underscores the importance of addressing the challenges of under-diagnosis and under-treatment of hearing loss.

“This study should be a wake-up call for people who are considering doing something about treating their hearing loss but have been delaying,” says Dr. Schum. “It’s not just about hearing well today, it’s about the long-term effects of untreated hearing loss.”

These findings add to a large body of evidence showing that technologies used in hearing aids must be designed to minimize the mental effort that hearing loss leads to when listening to speech in background noise. For almost 20 years, Oticon researchers at the world renowned Eriksholm research center have focused on BrainHearing™ technology, an approach that carefully processes the speech signal so it is presented to the person’s brain as clearly and accurately as possible – the way the brain is best able to understand it. With more sound information, the brain doesn’t have to work as hard to understand what is being said. The result is a clearer, more effortless listening experience. For people who wear hearing aids, this means less demanding mental processing throughout the day so they can engage more actively in everyday life.

The early findings of the study were shared by Professor Amieva at a professional conference sponsored by Oticon, Inc., attended by more than 1000 hearing care professionals.

Thanks for posting this info. I just want to let you know that I just check out your site and I find it very interesting and informative. I can't wait to read lots of your posts. Best Hearing Aids

How to find the best solution to your hearing loss problem with out spending a fortune. This article will show you how to self test your hearing and explore your hearing device options. comprehensiveaudiology