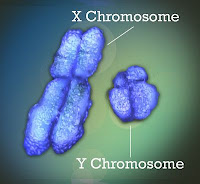 Women’s second “X” chromosome provides them with more longevity, and researchers are finding they also have extra protection against Alzheimer’s as well, through a special protective protein. Find out more.

Women with Alzheimer’s live longer than men with the disease, and scientists at UC San Francisco now have evidence from research in both humans and mice that this is because they have genetic protection from the ravages of the disease.

By virtue of having a second X chromosome, women get two “doses” of a protective protein from a gene that only exists on this female sex chromosome.

Why women are more protected

Some people, both male and female, have an especially potent variant of this gene, which is called KDM6A, that gives them even more protection. But, because of the way sex chromosomes work — women have two X’s, but men only have one — women have two copies of this gene churning out the protective protein.

The new study offers a first look at how sex chromosomes affect vulnerability to Alzheimer’s. And it helps explain why women survive longer and with less severe symptoms than men during early stages of the disease, even when they have comparable levels of toxic Alzheimer’s proteins in their brains.

“This finding challenges a long-standing dogma that women are more vulnerable to Alzheimer’s,” said Dena Dubal, MD, PhD, associate professor of neurology at UCSF and senior author of the study, published August 26, 2020, in Science Translational Medicine. Dubal is the David Coulter Endowed Chair in Aging and Neurodegenerative Disease, and a member of the UCSF Weill Institute for Neurosciences.

“More women than men have Alzheimer’s because they survive to older ages, when risk is highest. But they also survive with the disease for longer.”

KDM6A is a key gene

While much of a female’s second X chromosome is “silenced” by an outer layer of non-coding RNA, a small number of genes escape this process, in both mice and humans, giving females twice the dose of the proteins coded for by those genes. The researchers zeroed in on one of these active genes, KDM6A, which is already known to be involved in learning and cognition: when this gene malfunctions, it causes Kabuki syndrome, characterized by developmental delay and mild to severe intellectual disability.

Combing through public databases of gene expression studies, the scientists discovered an especially active variant of KDM6A that is carried by about 13 percent of women and 7 percent of men around the world. Because women have two X chromosomes, they have a greater chance of carrying at least one copy of this variant, and some women carry two copies.

When the scientists looked at several long-term studies of older people, many of whom already had mild cognitive impairment, they could see that women with one copy — or even better, two copies — of the variant appeared to progress more slowly toward Alzheimer’s. It’s not yet clear if the same holds true for men who carry the variant on their X chromosome, since there may have been too few of them in the study to see any effects.

Little is known about the ways that genetics drive differences in how diseases affect men and women, said Jennifer Yokoyama, PhD, an associate professor of neurology at the UCSF Memory and Aging Center and member of the Weill Institute, who analyzed the KDM6A variant in the new study. “Because the X and Y chromosomes are hard to compare to one another, the big genome-wide association studies have all been done on non-sex chromosomes,” Yokoyama said. “Perhaps our study will highlight the fact that there could be something pretty interesting on the X chromosome after all.”

The gene expression studies showed that women in general had more KDM6A protein in their brains than men. They also showed that people with Alzheimer’s had more of the protein in brain regions that get damaged early in the disease. The researchers theorized that neurons in these regions may produce more of the protein to protect against the disease, although the data they analyzed could only identify associations, and not prove causes.

To get closer to this causal question, the scientists performed experiments in mice. First, they looked inside the brains of female mice and confirmed that both copies of Kdm6a were actively transcribing RNA to make protein. Female mice had significantly higher levels of this protein in a brain region called the hippocampus, which is critical to learning and memory and gets damaged early in Alzheimer’s.

Then they bred mice which model human Alzheimer’s by producing toxic amyloid beta in their brains, so their male offspring produced amyloid and also carried two X chromosomes like females.

With a second X chromosome, the male mice did better on cognitive tests, and they also lived longer, despite the toxic proteins in their brains. To be sure it was the second X that provided protection, rather than the absence of a Y chromosome, scientists deleted the second X from female Alzheimer’s mice. And just like males, these female mice were more cognitively impaired and died faster.

The researchers built on these findings by increasing Kdm6a in a region of the hippocampus called the dentate gyrus, which is involved in spatial learning and memory, in male Alzheimer’s mice. One month later, the male mice had as much of the gene’s protein in that brain region as the female mice. These males also did significantly better on tests of spatial memory than male mice without the added Kdm6a.

“Our study reveals a new role for sex chromosomes,” Dubal said. “This protective mechanism on the X chromosome opens the possibility that we could increase resilience to Alzheimer’s and other neurodegenerative disorders by boosting Kdm6a or other X factors in both men and women.”