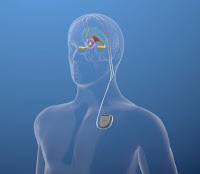 An estimated 5.5 million people in the United States live with Alzheimer’s disease, which is the most common form of dementia.

Keck Medicine of USC is enrolling individuals in an international Phase 3 clinical trial to examine the safety and effectiveness of deep brain stimulation to treat Alzheimer’s.

The study uses electrical impulses to stimulate the region of the brain known as the fornix, which is associated with memory and learning.

“Deep brain stimulation has successfully treated conditions such as Parkinson’s disease by improving motor skills, and we are now investigating if this therapy can stabilize or improve cognitive function,” says Darrin Lee, MD, PhD, a neurosurgeon with Keck Medicine of USC and the site’s principal investigator of the study.

“Based on the results of earlier phases of this clinical trial, the treatment offers a potential benefit for patients with mild Alzheimer’s.”

This randomized, double-blind study will last four years. Subjects will first take a standardized assessment test for Alzheimer’s to be used as a baseline measure of cognitive ability throughout the study.

Next, researchers will implant electrodes into subjects’ brains that connect to a battery pack, similar to a heart pacemaker, placed underneath the collarbone.

“For those with Alzheimer’s disease, certain parts of the brain become atrophied,” Lee says. “We are testing to see if stimulating the brain’s fornix can reawaken brain activity in this area and stop the progression of the disease.”

All subjects to receive optimal treatment

During the first year, subjects will be given subsequent cognitive tests to check if their memory or learning skills have held steady or improved.

At the end of the year, study researchers will examine data to determine which level of stimulation had the most impact on these skills.

For the next three years of the trial, all subjects in the study will receive what researchers have determined is the optimal frequency of deep brain stimulation, even those originally receiving the placebo.

Patients will continue to be given cognitive assessments throughout the four-year period.

To qualify for the trial, patients must be 65 or older, have been diagnosed with mild Alzheimer’s and take Alzheimer’s medication, and have a caregiver or family member who can accompany them to doctor visits.

The clinical trial involves approximately 200 patients at some 20 sites in the United States, Canada and Germany. Keck Medicine plans to enroll 8-15 patients.

Those interested in enrolling in the clinical trial with Keck Medicine can contact Amanda Romano at amanda.romano@med.usc.edu or 213-393-5640.

Deep brain stimulation has been approved by the U.S. Food and Drug Administration since 1997 and has proven to be safe. The trial is sponsored by Functional Neuromodulation, Inc.

Learn more about the clinical trial by clicking here.

Hello all, my name is Clarissa and I'd like to take an opportunity to invite any caregivers to those with dementia to participate in a study me and my lab at UC, Berkeley are recruiting for testing in-home assistive technology. This study uses aims to reduce the stress of caregivers and increase the safety of persons with dementia by using in-home monitoring sensors. The study is funded by the NIH and is completely free to participate. If you'd like to learn more, please visit our site at https://research.presencefamily.com/