PREVENTION & THERAPY NEWS:
In a big study of 26,000 people, the hippocampus “choked” on marijuana. (The hippocampus is the brain’s memory and learning center.) Marijuana lowered blood flow to levels unseen in any other group. Find out why this strongly suggests higher vulnerability to Alzheimer’s.

The marijuana users’ low blood flow patterns included areas known to be affected by Alzheimer’s pathology such as the hippocampus. 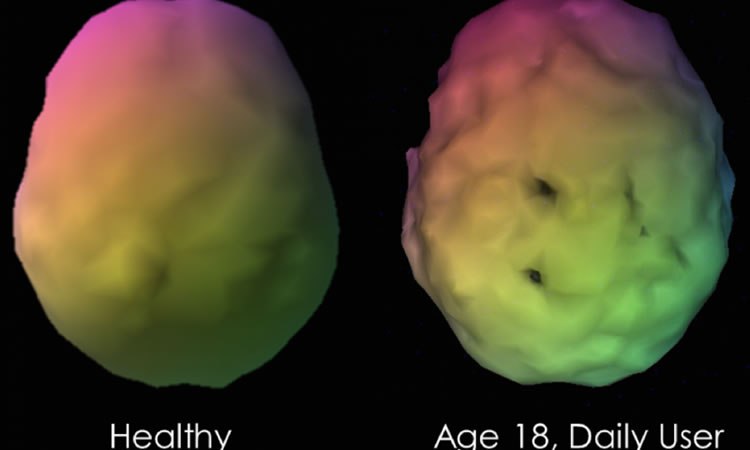 IMAGE LEGEND: Example of a volume rendered brain SPECT image (top down view) of a healthy control compared to an 18-year old daily user of marijuana. While the control subject has symmetric activity, the marijuana user shows overall decreased perfusion.

All data were obtained for analysis from a large multi-site database, involving 26,268 patients who came for evaluation of complex, treatment resistant issues to one of nine outpatient neuropsychiatric clinics across the United States (Newport Beach, Costa Mesa, Fairfield, and Brisbane, CA, Tacoma and Bellevue, WA, Reston, VA, Atlanta, GA and New York, NY) between 1995-2015. Of these, 982 current or former marijuana users had brain SPECT at rest and during a mental concentration task compared to almost 100 healthy controls. Predictive analytics with discriminant analysis was done to determine if brain SPECT regions can distinguish marijuana user brains from controls brain.

According to one of the co-authors on the study Elisabeth Jorandby, M.D., “As a physician who routinely sees marijuana users, what struck me was not only the global reduction in blood flow in the marijuana users brains, but that the hippocampus was the most affected region due to its role in memory and Alzheimer’s disease.”

May Be Harbingers of Brain Damage

She continued, “Our research has proven that marijuana users have lower cerebral blood flow than non-users. Second, the most predictive region separating these two groups is low blood flow in the hippocampus on concentration brain SPECT imaging. This work suggests that marijuana use has damaging influences in the brain – particularly regions important in memory and learning and known to be affected by Alzheimer’s.”

Dr. George Perry, Editor in Chief of the Journal of Alzheimer’s Disease said, “Open use of marijuana, through legalization, will reveal the wide range of marijuana’s benefits and threats to human health. This study indicates troubling effects on the hippocampus that may be the harbingers of brain damage.”

I wish they would make up their minds. I have Mild Cognitive Impairment and come from a long line of family, including Mom, Maternal Grandmother etc. who died with Alzheimer's. I have continually read how marijuana can help with this disease and I have been using it to treat mild cognitive impairment which is early Alzheimer's. It helps with the symptoms a great deal and I thought I was doing a good thing. Now I am reading the exact opposite. I use CBD capsules (nonpsycho-active) part of marijuana in the morning and in the late afternoon and then THC at bedtime. I have used no other "Alzheimer's medications. I also became a Vegan as soon as I was diagnosed and my Doctor has been really happy with how slowly the disease has been progressing. Now I read this article and I am starting to get very frustrated. I know that at this time, there is nothing that will cure my disease, but to have something that helps with the symptoms and slows the progress has been so great. I have to quit reading this stuff and just keep doing what is working for me.

Stick with what works for you. Works wonderful on treating my 75 year old father's. Proven to work opposite in the elderly. Better than any Rx

I may have missed this but were the people smoking it in its natural state or were they using medical marijuana with the nonpsycho-active part removed?

It's unfortunate this article is behind a paywall. Because this: "All data were obtained for analysis from a large multi-site database, involving 26,268 patients who came for evaluation of complex, treatment resistant issues to one of nine outpatient neuropsychiatric clinics across the United States…" makes me wonder about their criteria for 'healthy' controls. If the users were suffering from neuropsychiatric health issues, shouldn't they have been compared to others with similar issues who weren't users (rather than to healthy controls)?

Show me who benefits from a study, and I'll show you who fielded it.

We've sen people improve in both cognitive and behavioral symptoms when they use infrared light stimulation and neurofeedback training. Our studies are ongoing andnsubjects are needed. Quietmindfdn.org

This requires all of us back to that concept of sketching the line within the sand and starting over. prescription drug addiction

Strange,because recently I read there are trials ongoing with Marijuana,( I think it was a University in California from memory) that was proving very positive regarding the drug breaking down the Amoloyid Protein Plagues???

That could be because chronic cannabis users extract more oxygen from brain blood flow than nonusers:

So, it's important to remember to keep things in perspective. Three major categories are of concern when determining our risk of being diagnosed with AD. They are; GENETICS,ENVIROMENT and LIFE STYLE. As a health care professional, I prefer LIFE CHOICES as it forces us to "own up" to our past. This study of 26,268 participants (so far as I can see) only takes into account ONE of these areas–LIFESTYLE. Additionally, under the category of LIFESTYLE are five sub categories; Nutrition, Hydration, Exercise, Rest and Stress Management. The use of controlled substances–prescribed or not–certainly may play a role in the risk of developing AD (due to "decreased blood flow to the right hippocampus) but without taking into account ALL available data, we cannot accurately determine our risk of one day being diagnosed. Determining risks is crucial in planning how to avoid AD. While the use of Marijuana may play a role in developing the disease, we also know that AD is not a monolithic disease but rather a syndrome of at least two or more contributory factors. The BA plaques and neurofibrillary tangles are in fact an inflammatory response–due to a variety of reasons. Many of which are significantly (and in some cases directly)influenced by the fore mentioned categories.Known causes include; Being ApoE4 positive(genetics),biotoxins such as mold—also known as inhalation AD–(environment)and leaky gut(life choices). Millions of seniors today who suffer from AD did not live a lifetime ingesting cannabis; my late dad being one of them. I'm in favor of this study in that it focuses on prevention and is therefore "proactive" rather than "reactive". I cannot overstate the importance of being proactive when it comes to avoiding this disease! Study carefully ALL of the previously mentioned categories and sub categories, apply them to your life and you will maximize you odds of avoiding this terrible debilitating brain disorder.