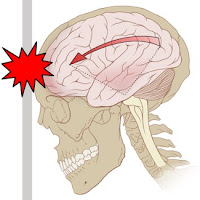 CTE stands for Chronic Traumatic Encephalopathy, a type of dementia that can result from multiple concussions or lighter hits to the head over time. In 2013, a $765 million payout by the NFL over CTE dementia, CTE-type of dementia made front page headlines. It became a matter of concern for millions of people engaged in concussion-prone activities as obvious as football or boxing, to ones as subtle as biking and soccer, all which carry the risk of multiple hits to the head over the course of a lifetime.

Across America, according to latest reports, nearly 300,000 high school athletes sustain concussions each year. Properly identifying, evaluating, and treating those student athletes is critical to returning them to the game safely.

“Over the years we have gradually witnessed an increase in the number of concussions among high school athletes,” said Lovick. “It is critical to not only quickly identify and evaluate the severity of the brain injury but to also use caution when determining when that athlete is ready to get back in the game.”

A concussion is a traumatic injury to the brain typically caused by a blow to the head. Symptoms can include headache, vomiting, blurred vision, brain fog, fatigue, mental confusion, difficulty sleeping, and in the most serious instances, loss of consciousness.

Concussions can range from mild, moderate, and severe and can be evaluated through a variety of tools including a neurological exam, a head CT, or an MRI.

Once a patient has been evaluated and treated and is asymptomatic, Lovick advocates a graduated stepwise return to play.

The “return to play” approach should only be implemented once the patient is completely asymptomatic and the patient should only take one step each day. If at any point symptoms resume, the player should rest and begin steps again once symptoms have dissipated. If the patient fails to progress, additional testing and evaluation is recommended.

“Obviously the safety and well-being of the student is everyone’s top priority,” said Lovick. “Educating parents, coaches, and the athletes themselves, so the player only returns to play once he or she is physically ready, is essential.”

A concussion is traumatic brain injury that changes the way your brain functions. When the skull is jolted or impacted by a hard surface, the brain shifts, slamming against the skull, causing damage and swelling to the brain. If treated correctly, brain will heal. But if not, results can be deadly.

About the Saint Luke’s Neuroscience Institute: