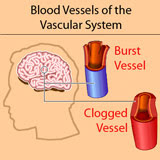 MEMORY problems are too-quickly diagnosed as Alzheimer’s. A more common memory-culprit may be vascular dementia, caused by stroke, mini-stroke and high blood pressure. Learn the differences and how the right diagnosis effects therapy and treatment.

Alzheimer’s is connected to sticky plaques made of beta-amyloid that choke brain cells, thereby causing dementia. People may act like they have Alzheimer’s when they really have vascular dementia. Vascular dementia is caused by vascular events (related to blood vessels) such as strokes and mini-strokes, so treatment is different. (Mini-strokes occur in the brain when blood vessels clog up or burst. They can accumulate slowly and can go unnoticed for years.)

Get the Right Medicine

For example, the damage caused by plaque is typically treated with acetylcholinesterase inhibitors like Aricept®. These drugs target the nervous system. Vascular problems like mini-strokes are treated with blood-targeting medications and therapies.

Alzheimer’s disease and vascular dementia are two types of dementia that are common in the elderly. A person’s dementia can even be caused by a combination of the two, called “Mixed Dementia.”

With today’s technology, both vascular brain injury as well as beta-amyloid plaque can be detected in the brain. They both cause memory and thinking problems, called “cognitive impairment”. If the cognitive impairment is strong and interferes with a typical person’s day, it is called dementia. If it is mild, it is called MCI (Mild Cognitive Impairment).

Until now, doctors generally assumed that when they saw cognitive impairment, it was probably from plaque building up in the brain. That usually meant Alzheimer’s. Treatment and therapy were given accordingly. New research is showing that vascular brain injury from strokes or the mini-strokes often caused by high blood pressure may deserve the greater part of their attention. That usually means “vascular dementia” or “mixed dementia.”

A study at the Alzheimer’s Disease Research Center at UC Davis has found that vascular brain injury from conditions such as high blood pressure and stroke are greater risk factors for cognitive impairment among non-demented older people than is the deposition of the amyloid plaques in the brain that long have been implicated in conditions such as Alzheimer’s disease.

Published online in JAMA Neurology (formerly Archives of Neurology), the study found that vascular brain injury had by far the greatest influence across a range of cognitive domains, including higher-level thinking and the forgetfulness of mild cognitive decline.

The researchers also sought to determine whether there was a correlation between vascular brain injury and the deposition of beta amyloid (Αβ) plaques, thought to be an early and important marker of Alzheimer’s disease, said Bruce Reed, associate director of the UC Davis Alzheimer’s Disease Research Center in Martinez, Calif. They also sought to decipher what effect each has on memory and executive functioning.

“We looked at two questions,” said Reed, professor in the Department of Neurology at UC Davis. “The first question was whether those two pathologies correlate to each other, and the simple answer is ‘no.’ Earlier research, conducted in animals, has suggested that having a stroke causes more beta amyloid deposition in the brain. If that were the case, people who had more vascular brain injury should have higher levels of beta amyloid. We found no evidence to support that.”

“The second,” Reed continued, “was whether higher levels of cerebrovascular disease or amyloid plaques have a greater impact on cognitive function in older, non-demented adults. Half of the study participants had abnormal levels of beta amyloid and half vascular brain injury, or infarcts. It was really very clear that the amyloid had very little effect, but the vascular brain injury had distinctly negative effects.”

“The more vascular brain injury the participants had, the worse their memory and the worse their executive function – their ability to organize and problem solve,” Reed said.

The research was conducted in 61 male and female study participants who ranged in age from 65 to 90 years old, with an average age of 78. Thirty of the participants were clinically “normal,” 24 were cognitively impaired and seven were diagnosed with dementia, based on cognitive testing. The participants had been recruited from Northern California between 2007 to 2012.

The study found that both memory and executive function correlated negatively with brain infarcts, especially infarcts in cortical and sub-cortical gray matter. Although infarcts were common in this group, the infarcts varied greatly in size and location, and many had been clinically silent. The level of amyloid in the brain did not correlate with either changes in memory or executive function, and there was no evidence that amyloid interacted with infarcts to impair thinking.

Reed said the study is important because there’s an enormous amount of interest in detecting Alzheimer’s disease at its earliest point, before an individual exhibits clinical symptoms. It’s possible to conduct a brain scan and detect beta amyloid in the brain, and that is a very new development, he said.

The Meaning of Amyloid Vs. Vascular Problems

“The use of this diagnostic tool will become reasonably widely available within the next couple of years, so doctors will be able to detect whether an older person has abnormal levels of beta amyloid in the brain. So it’s very important to understand the meaning of a finding of beta amyloid deposition,” Reed said.

“What this study says is that doctors should think about this in a little more complicated way. They should not forget about cerebrovascular disease, which is also very common in this age group and could also cause cognitive problems. Even if a person has amyloid plaques, those plaques may not be the cause of their mild cognitive symptoms.”

I guess that this imporntant research article is a "turning point ' in AD research , and
It research article can be considered as a milestone paper , tbat proved that one of the main starters of AD and others age-related dementias are the ageing-related macro and microvascular brain disorders.

The article comproves again that the betamyloid acccumulation it is more for a "witness" (some times a toxic witness) than the culprit of dementias as AD.

What would be a treatment for vascular dementia?