PEOPLE WITH MEMORY ISSUES EXPERIENCED slower degeneration in a brain region crucial for memory when exercising regularly. Check out 13 light exercises to prevent and fight Alzheimer’s.
See Dr. Wendy Suzuki’s brain-changing work-out science. It can boost mood and memory – and protect against neurodegenerative diseases like Alzheimer’s.

Research from UT Southwestern found that people who had accumulation of amyloid beta in the brain — a hallmark of Alzheimer’s disease — experienced slower degeneration in a region of the brain crucial for memory if they exercised regularly for one year.

Although exercise did not prevent the eventual spread of toxic amyloid plaques blamed for killing neurons in the brains of dementia patients, the findings suggest an intriguing possibility that aerobic workouts can at least slow down the effects of the disease if intervention occurs in the early stages.

“What are you supposed to do if you have amyloid clumping together in the brain? Right now doctors can’t prescribe anything,” said Dr. Rong Zhang, who led the clinical trial that included 70 participants ages 55 and older. “If these findings can be replicated in a larger trial, then maybe one day doctors will be telling high-risk patients to start an exercise plan. In fact, there’s no harm in doing so now.” 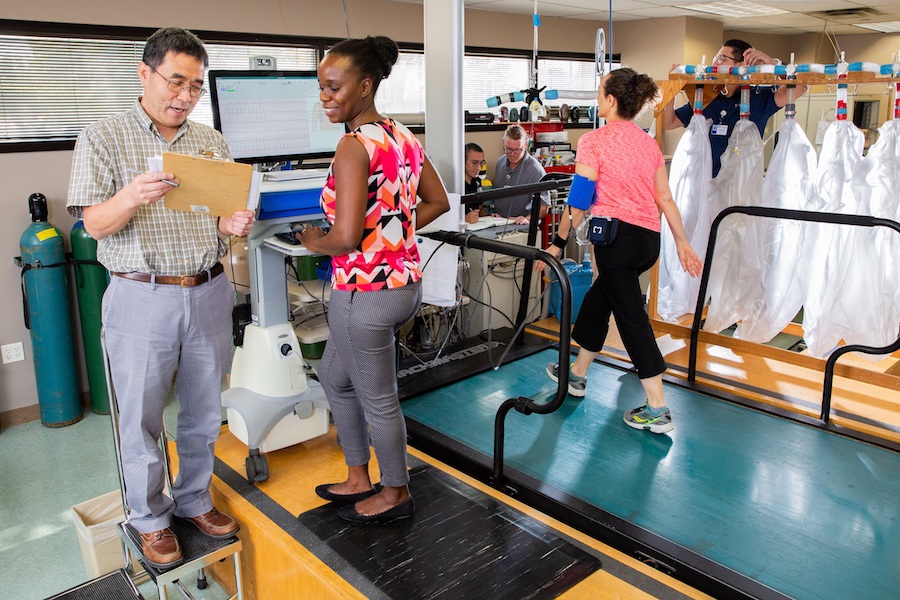 Dr. Rong Zhang reviews data at the Institute for Exercise and Environmental Medicine (IEEM). A new study conducted at the IEEM shows regularly exercising may slow down brain deterioration in people at high risk for Alzheimer’s disease.

The study published in the Journal of Alzheimer’s Disease compared cognitive function and brain volume between two groups of sedentary older adults with memory issues: One group did aerobic exercise (at least a half-hour workout four to five times weekly), and another group did only flexibility training.

Both groups maintained similar cognitive abilities during the trial in areas such as memory and problem solving. But brain imaging showed that people from the exercise group who had amyloid buildup experienced slightly less volume reduction in their hippocampus — a memory-related brain region that progressively deteriorates as dementia takes hold.

“It’s interesting that the brains of participants with amyloid responded more to the aerobic exercise than the others,” said Dr. Zhang, who conducted the trial at the Institute for Exercise and Environmental Medicine. “Although the interventions didn’t stop the hippocampus from getting smaller, even slowing down the rate of atrophy through exercise could be an exciting revelation.”

However, Dr. Zhang notes that more research is needed to determine how or if the reduced atrophy rate benefits cognition.

The search for dementia therapies is becoming increasingly pressing: More than 5 million Americans have Alzheimer’s disease, and the number is expected to triple by 2050.

Recent research has helped scientists gain a greater understanding of the molecular genesis of the disease, including a UT Southwestern discovery published last year that is guiding efforts to detect the condition before symptoms arise. Yet the billions of dollars spent on trying to prevent or slow dementia have yielded no proven treatments that would make an early diagnosis actionable for patients.

“Never has diet been so important for brain health and reducing risk for Alzheimer’s. This is not a simple diet book―it’s a food bible that tells you all you need to know to start eating your way to a healthy brain, right now!”
——— Dr. Rudolph E. Tanzi, Director, Alzheimer’s Genome Project; Director, Genetics and Aging Research Unit, Massachusetts General Hospital; and Joseph. P. and Rose F. Kennedy Professor of Neurology, Harvard Medical School

Dr. Zhang is among a group of scientists across the world trying to determine if exercise may be the first such therapy.

His latest research builds upon numerous studies suggesting links between fitness and brain health. For example, a 2018 study showed that people with lower fitness levels experienced faster deterioration of vital nerve fibers in the brain called white matter. Research in mice has similarly shown exercise correlated with slower deterioration of the hippocampus — findings that prompted Dr. Zhang to investigate whether the same effects could be found in people.

“I’m excited about the results, but only to a certain degree,” Dr. Zhang said. “This is a proof-of-concept study, and we can’t yet draw definitive conclusions.”

Dr. Zhang is leading a five-year national clinical trial that aims to dig deeper into potential correlations between exercise and dementia.

The trial, which includes six medical centers across the country, involves more than 600 older adults (ages 60-85) at high risk of developing Alzheimer’s disease. The study will measure whether aerobic exercise and taking specific medications to reduce high blood pressure and cholesterol can help preserve brain volume and cognitive abilities.

“Understanding the molecular basis for Alzheimer’s disease is important,” Dr. Zhang said. “But the burning question in my field is, ‘Can we translate our growing knowledge of molecular biology into an effective treatment?’ We need to keep looking for answers.”

The 13 exercises in this sample workout can help seniors and people looking for light exercises, to prevent and fight Alzheimer’s. Watch them one at a time, at your convenience, in the short videos below. Alternatively, download or order the free booklet. In this booklet, you’ll find easy-to-follow strength, balance, and flexibility exercises that you can do anytime, anywhere.

Each of the following exercise videos offer step-by-step instructions. They are featured by the U.S. government’s National Institute on Aging at NIH. Exercises include:

For more exercises and information, get the free book:

This publication is also available on Google Play and iTunes .

Also, check out the resources offered through Go4Life®, an exercise and physical activity campaign from the National Institute on Aging at NIH.