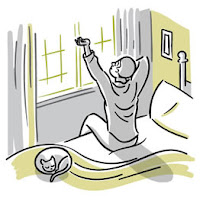 Beta-amyloid (also known as “plaque”) is the main suspect behind Alzheimer’s. Sleep can clear it TWICE as quickly as wakefulness, in the lab. Find out how sleep doubles the clearance of this dangerous Alzheimer’s molecule.

A mouse study suggests that sleep helps restore the brain by flushing out toxins that build up during waking hours. The results point to a potential new role for sleep in health and disease.

Scientists watched dye flow through the glymphatic system, a brain “plumbing” system, of a mouse when it was asleep (left) and then, later, when it was awake (right). More dye flowed into the brain during sleep. Results from this study suggest the brain may flush out toxic molecules associated with neurodegenerative disorders during sleep. Courtesy of Nedergaard Lab, University of Rochester Medical Center.

Scientists and philosophers have long wondered why people sleep and how it affects the brain. Sleep is important for storing memories. It also has a restorative function. Lack of sleep impairs reasoning, problem-solving, and attention to detail, among other effects. However, the mechanisms behind these sleep benefits have been unknown.

Dr. Maiken Nedergaard and her colleagues at the University of Rochester Medical Center recently discovered a system that drains waste products from the brain. Cerebrospinal fluid, a clear liquid surrounding the brain and spinal cord, moves through the brain along a series of channels that surround blood vessels. The system is managed by the brain’s glial cells, and so the researchers called it the glymphatic system.

Brain Cleanup by the Glymphatic System

The scientists also reported that the glymphatic system can help remove a toxic protein called beta-amyloid from brain tissue. Beta-amyloid is renowned for accumulating in the brains of patients with Alzheimer’s disease. Other research has shown that brain levels of beta-amyloid decrease during sleep. In their new study, the team tested the idea that sleep might affect beta-amyloid clearance by regulating the glymphatic system. The work was funded by NIH’s National Institute of Neurological Disorders and Stroke (NINDS).

The researchers first injected dye into the cerebrospinal fluid of mice and monitored electrical brain activity as they tracked the dye flow through the animals’ brains. As reported in the October 18, 2013, edition of Science, the dye barely flowed when the mice were awake. In contrast, when the mice were unconscious—asleep or anesthetized—it flowed rapidly.

Changes in the way fluid moves through the brain between conscious and unconscious states may reflect differences in the space available for movement. To test the idea, the team used a method that measures the volume of the space outside brain cells. They found that this “extracellular” volume increased by 60% in the brain’s cortex when the mice were asleep or anesthetized.

The researchers next injected mice with labeled beta-amyloid and measured how long it lasted in their brains when they were asleep and awake. Beta-amyloid disappeared twice as quickly in the brains of mice that were asleep.

Glial cells control flow through the glymphatic system by shrinking and swelling. The hormone noradrenaline, which increases alertness, is known to cause cells to swell. The researchers thus tested whether the hormone might affect the glymphatic system. Treating mice with drugs that block noradrenaline induced a sleep-like state and increased brain fluid flow and extracellular brain volume. This result suggests a molecular connection between the sleep-wake cycle and the brain’s cleaning system.

The study raises the possibility that certain neurological disorders might be prevented or treated by manipulating the glymphatic system. “These findings have significant implications for treating ‘dirty brain’ diseases like Alzheimer’s,” Nedergaard says. “Understanding precisely how and when the brain activates the glymphatic system and clears waste is a critical first step in efforts to potentially modulate this system and make it work more efficiently.”

this blog gives huge information about beta amloid which relates to the brain. thanks for posting this blog.