Alzheimer’s & The Power of Music 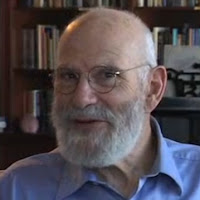 Music’s effect on the brain fascinated neurologist Oliver Sacks, MD. His research led him to helping people with Alzheimer’s. Watch this best-selling author share how dementia, without exception, responds to music.

Where I work at a hospital and at a number of old age homes, there are a lot of people who have Alzheimer’s or other dementias of one sort or another.

Some of them are confused, some are agitated, some are lethargic, some have almost lost language.

But all of them, without exception, respond to music. This is especially true of old songs and songs they once knew.

These seem to touch springs of memory and emotion which may be completely inaccessible to them.

It is most amazing to see people who are out of it and sort of dark respond suddenly to a music therapist and a familiar song.

At first they will smile, then perhaps keep time, and then join in.

Who was Oliver Sacks?

Alzheimer’s expert Oliver Sacks was an eminent neurologist and acclaimed best-selling author. His remarkable career included a number of hugely popular books, including “The Man Who Mistook His Wife For A Hat: And Other Clinical Tales

” an exploration of unusual afflictions of the brain. He was best known for his book and film “Awakenings

He felt that the brain was the “most incredible thing in the universe” and therefore the most important to study.

Few people can claim to have made such a profound impact on the public understanding of the brain and its inner workings.

It is an amazing thing to see and, of course, to experience.

That sort of lucidity and pleasure can last for hours afterwards.

So the past which is not recoverable in any other way seems to be sort of “embedded in amber”, if you will, in music. People can regain a sense of identity, at least for a while.

Virtually everyone does, and they will continue to do so, despite a severe dementia.

In a severe dementia, one may have lost the power of language and may have lost most of one’s “event memory”, so one can remember very little of one’s past. But one will always remember songs one has heard and sung and familiar music.

So familiar songs will bring back memories, perhaps, of when the music was originally heard. It may have been an outing, something on Coney Island, the kids were there. All this which has been lost in amnesia will come back, as if it were embedded in a familiar song. It can come back.

You can at least get some feel of it and regain it, for a little while, with familiar music.

Mother was a music teacher, and she introduced all of us to the piano and classical music at early ages. She was able to play the piano throughout the progression of her Alzheimer's, until just a few wee ks before she died. Long after her vocabulary had shrunk to a few dozen words, she could still play the piano. And, she watched The Sound of Music once or twice a day for the last two years of her life. Each time she saw it, the story was new. And as the movie started with Julie Andrews singing in the meadow, mama would clap her hands with delight. I'd be happy to share a complimentary Kindle version of my book with you, Moving Mama; Taking Care of Mother During her Final Years with Alzheimer's. http://www.movingmama.net.

For both sides.
Trying to understand Alzheimers with some distance in the form of time since the death of my father and it's still not clear to me. The song Comfortably Numb by Pink Floyd somehow connects me to the confusing mystery of it all.

Me: What a thing to recede into your brain. To be pulled in with a force painfully slower and yet more forceful than that of gravity. And from the outside you're fading backwards.
Him: Your signal is getting low.
Me: Hello?
Him: Is there anyone out there?
Me: Is there anybody in there? Is there anybody home?
Him: Hello?
Me: Can you show me where it hurts? Our signals are crossing. You are only coming through in waves. Your lips move but I can't hear what you say.
Him: There is no pain, you are receding. You would not understand this. It's not how I am. I can only see out of the corner of my eyes. There is nothing on the horizon. I turn to look but you are gone. I cannot put my finger on it now.
Me: The child has grown, the dream is gone. I have become comfortably numb.

Alzheimers has changed you and I. There is a large crack in the foundation of my soul.
And still the nightmares have and will forever haunt me out in the corner of my eyes the way the disease haunted you.
Dad, the child is gone. He has have become comfortably numb.

I have the best quality free ringtones. You should refer here to get the best unique ringtone: ringtonedownload

Bollywood ringtone. Hindi ringtone. Hot Ringtones. There are many new attractive ringtone 2018 that you do not know. Here are some of the popular and downloaded songs:

I think you will need it. Thank you!