A NEW STUDY finds that cognitive impairment begins in the earliest stages of age-related hearing loss — when hearing is still considered normal. (Cognitive impairment means trouble remembering, learning, concentrating & deciding.) Learn what you can do to spot and prevent it.

Research has shown that adults with age-related hearing loss have higher rates of cognitive decline. Now, a study from researchers at Columbia University Vagelos College of Physicians and Surgeons has found that even the earliest stage of hearing loss — when hearing is still considered normal — is linked to cognitive decline.

HOW TO IMPROVE YOUR HEARING AT HOME

The study was published online in JAMA Otolaryngology-Head and Neck Surgery.

Age-related hearing loss is one of the most common health disorders of aging, affecting two-thirds of those over age 70. However, few adults are tested for hearing loss, and even fewer are treated. Only 14% of adults with hearing loss in the United States wear hearing aids, the standard treatment.

Because studies show people with age-related hearing loss are more likely to have impaired cognition, it is thought that hearing loss may trigger cognitive decline.

But these studies have only examined people diagnosed with hearing loss, which is defined as the inability to hear sounds under 25 decibels (dB).

“Physicians in this field have used 25 dB — about the loudness of a whisper — to define the border between normal hearing and mild hearing loss in adults, but this level is arbitrary,” says Justin S. Golub, MD, MS, assistant professor of otolaryngology-head and neck surgery at Columbia University Vagelos College of Physicians and Surgeons and a hearing specialist at Columbia University Irving Medical Center and NewYork-Presbyterian Hospital. “It has been assumed that cognitive impairment wouldn’t begin until people passed this threshold. But no one actually looked at whether this was true.”

Any Hearing Loss May Be Cause for Concern

The researchers looked at data from 6,451 adults (average age 59) who were enrolled in two ethnically diverse epidemiologic studies. Participants underwent hearing and cognitive testing as part of the studies.

Golub and his colleagues found that for every 10 dB decrease in hearing, there was a significant decrease in cognitive ability, a pattern seen across the entire spectrum of hearing.

Surprisingly, the largest decrease in cognitive ability occurred in those whose hearing was just starting to become impaired, just 10 dB off the perfect mark.

“Most people with hearing loss believe they can go about their lives just fine without treatment, and maybe some can,” says Golub. “But hearing loss is not benign. It has been linked to social isolation, depression, cognitive decline, and dementia. Hearing loss should be treated. This study suggests the earlier, the better.”

The current study did not address whether hearing loss causes cognitive impairment. It is possible that early declines in both hearing and cognitive performance are related to common aging-related processes, the researchers noted.

“But it’s also possible that people who don’t hear well tend to socialize less and, as a result, they have fewer stimulating conversations. Over many years, this could have a negative impact on cognition,” says Golub. “If that’s the case, preventing or treating hearing loss could reduce dementia incidence — by more than 9%, according to a recent analysis published in The Lancet.”

A new study, funded by the National Institutes of Health, is now testing the possibility that hearing aids can slow cognitive decline in older people with age-related hearing loss.

More studies are needed before recommending changes in hearing loss categories. “One possibility is to formally introduce a new category, such as borderline hearing loss, ranging from 16 to 25 dB of hearing ability,” says Golub.

Many people live with unidentified hearing loss and the associated cognitive decline of their brain. They often fail to realize that they are missing out on certain sounds and words. To address this problem, the World Health Organization (W.H.O.) is urging people to check their hearing.

Worldwide, some 466 million people have disabling hearing loss, and the WHO estimates that by 2050 that figure will almost double, affecting one in 10 people. The cost of unaddressed hearing loss is believed to be around US$ 750 billion.

A new app called “Hearing Test” allows people to check their hearing regularly and intervene early in case of hearing loss. It can also be used by health workers to screen people in the community, and refer them for diagnostic testing if they fail the screening.

The popular app has been downloaded by over a million people and is the recipient of thousands of great reviews. One Google Apps reviewer said, “First off, this is the best free hearing test app available. No doubt about that, and a comparison to my actual hearing test from my audiologist shows a startling accuracy that I was not expecting. This app does however have a couple of areas where improvements can be made, including server connectivity problems and occasional loud hissing/static if the Hz are out of your device’s threshold. But seriously, if used correctly, this app is incredibly accurate, especially for no money! Recommended.” The app is of particular benefit to people who are often exposed to high levels of sound, such as those who listen to loud music or work in noisy places; people who use medicines that are harmful to hearing; and people aged above 60 years.

In a statement released by the W.H.O., Dr. Shelly Chadha, Technical Officer of the organization, said that “once lost, hearing does not come back… we encourage people to ‘Check your hearing!’ in order to help preserve this valuable gift that helps us to enjoy life.”

According to the World Health Organization (WHO), worldwide, 360 million people today have moderate to profound hearing loss. It is estimated that half of all cases of hearing loss are avoidable.

Some 1.1 billion teenagers and young adults are at risk of hearing loss due to the unsafe use of personal audio devices, including smartphones, and exposure to damaging levels of sound at noisy entertainment venues such as nightclubs, bars and sporting events, according to the W.H.O. Hearing loss has potentially devastating consequences for physical and mental health, education and employment.

“As they go about their daily lives doing what they enjoy, more and more young people are placing themselves at risk of hearing loss,” notes Dr Etienne Krug, WHO Director for the Department for Management of Noncommunicable Diseases, Disability, Violence and Injury Prevention. “They should be aware that once you lose your hearing, it won’t come back. Taking simple preventive actions will allow people to continue to enjoy themselves without putting their hearing at risk.” 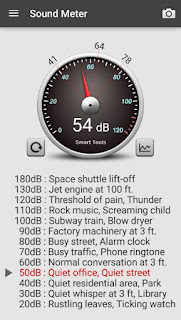 Safe listening depends on the intensity or loudness of sound, and the duration and frequency of listening. Exposure to loud sounds can result in temporary hearing loss, or even tinnitus, which is a ringing sensation in the ear. When the exposure is particularly loud, regular or prolonged, it can lead to permanent damage of the ear’s sensory cells, resulting in irreversible hearing loss.

The free “Sound Meter“ app uses your smart phone to give you the bottom line regarding just how loud is the space you are in. One Google Apps reviewer said, “Very accurate compared to lots of other sound meter apps. I didn’t have a physical sound meter to compare to, but I did test it against equipment rated for a decibel range and it was within the range.” It ranks impressively high among users on Google’s store. Over 10 million people have installed it.

“Sound Meter” measures noise volume in decibels (db), and if you touch the “T” button, it flips to a “REFERENCE” screen, which shows you in plain English phrases what the current decibel level means. For example, if you are in a noisy room, it will tell you if the sound level is comparable to:

If you are looking for something more sophisticated to measure your noise exposure, France’s Laboratory of Environmental Acoustics offers a free app called “Noise Capture“, which will create a “Noise Map” of your world, as you travel through your day. It’s a great app for capturing the “Big Picture” of your hearing environment.

WHO (The World Health Organization) recommends that the highest permissible level of noise exposure in the workplace is 85 dB up to a maximum of eight hours per day. Many patrons of nightclubs, bars and sporting events are often exposed to even higher levels of sound, and should therefore considerably reduce the duration of exposure. For example, exposure to noise levels of 100 dB, which is typical in such venues, is safe for no more than 15 minutes. 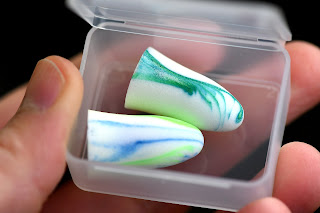 6 ways people can better protect their hearing are:

Governments also have a role to play by developing and enforcing strict legislation on recreational noise, and by raising awareness of the risks of hearing loss through public information campaigns. Parents, teachers and physicians can educate young people about safe listening, while managers of entertainment venues can respect the safe noise levels set by their respective venues, use sound limiters, and offer earplugs and “chill out” rooms to patrons. Manufacturers can design personal audio devices with safety features and display information about safe listening on products and packaging.

Symptoms to pay attention to, which indicate the onset of hearing loss, include:

How Does Loud Noise Cause Hearing Loss?

The average person is born with about 16,000 hair cells within their cochlea. These cells allow your brain to detect sounds. Up to 30% to 50% of hair cells can be damaged or destroyed before changes in your hearing can be measured by a hearing test. By the time you notice hearing loss, many hair cells have been destroyed and cannot be repaired.

After leaving a very loud event, such as a concert or football game, you may notice that you don’t hear as well as before. You might not hear whispers, sound might seem muffled, or you may hear ringing in your ears. Normal hearing usually returns within a few hours to a few days. This is because the hair cells, similar to blades of grass, will bend more if the sound is louder. But they will become straight again after a recovery period.

WHAT CAN HAPPEN INSIDE YOUR EAR

THE NUMBER OF AMERICANS WITH HEARING LOSS HAS DOUBLED.
GLOBALLY THE NUMBER IS UP BY 44%.

Age-related hearing loss is associated with an increased risk of cognitive decline and dementia, an analysis of 40 studies from 12 countries has confirmed.

The analysis linked hearing loss to a modestly increased risk of cognitive impairment and dementia and to declines in all aspects of cognition, including episodic memory and executive function. The findings were published in JAMA Otolaryngology.