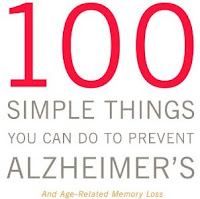 VIDEO & ARTICLE – BOOK OF THE WEEK:

CNN’s former medical correspondent has written a book on dementia containing “100 Simple Things You Can Do to Prevent Alzheimer’s and Age-Related Memory Loss“. Backed by good science, see the author discuss a few of these “100 Simple Things” that help preserve thinking and memory.

Most people think there is little or nothing you can do to avoid Alzheimer’s. But scientists know this is no longer true. In fact, prominent researchers now say that our best and perhaps only hope of defeating Alzheimer’s is to prevent it. We already know many ways to lower the risk.

After 70-year-old best-selling author Jean Carper discovered that she had the major susceptibility gene for Alzheimer’s, she was determined to find all the latest scientific evidence on how to escape it.

She discovered 100 surprisingly simple scientifically tested ways to radically cut the odds of Alzheimer’s, memory decline, and other forms of dementia.

Did you know that vitamin B 12 helps keep your brain from shrinking? Apple juice mimics a common Alzheimer’s drug? Surfing the internet strengthens aging brain cells? Ordinary infections and a popular anesthesia may trigger dementia? Meditating spurs the growth of new neurons? Exercise is like Miracle-Gro for your brain?

Even a few preventive actions could dramatically change your future by postponing Alzheimer’s so long that you eventually outlive it.

If you can delay the onset of Alzheimer’s for five years, you cut your odds of having it by half. Postpone Alzheimer’s for ten years, and you’ll most likely never live to see it.

100 Simple Things You Can Do to Prevent Alzheimer’s will change the way you look at Alzheimer’s and provide exciting new answers from the frontiers of brain research to help keep you and your family free of this heartbreaking disease.

Jean Carper is an award-winning medical journalist and the author of 23 books, including the New York Times bestsellers:

She is a contributing editor to USA Weekend Magazine, and wrote the magazine’s “Eat Smart” column for 14 years.

She lives in Washington, D.C., and Florida.

These preventive or slowing down of dementia/alz. stages is fantastic !

Get your medical info from a Doctor… Not a author/editor.
Alzheimer's… It is what it is! Just like cancer or heart disease. You live the best you can, however in most cases you get the disease anyway.

You are one of the uneducated who will probably get Alzheimer's. Grandma was right – You are what you eat. 90% of disease is all about the food we eat. The other 10% is left to chance. I don't know about you but I'm not leaving 100% to chance. I'm deciding not to get Alzheimer's by doing the right things.

The FACTS:
ALZ is a specific disease. It is characterized by plaques and tangles in the brain tissue.
NOBODY knows the cause. The first person who learns the cause of ALZ will automatically win a Nobel prize.
Fact: NOBODY (not even 1 person) has ever survived the disease Alzheimer's. It is 100% fatal.

Now we have an author who claims to be able to prevent a disease that nobody knows the cause and nobody can treat? How can that be?
It is because her claims are NOT for the documented, diagnosed disease known as Alzheimer's.
She has slurred combined and confused the other conditions of 'dementia' and 'memory loss'. This are NOT diseases. These are NOT medical pathologies they are symptoms. Symptoms that can have many, many causes. Perhaps these symptoms can be stopped? modified? Maybe but the scientific fact is that the disease pathology identified as Alzheimer's still has not cure and is sadly 100% fatal.

To even imply that Alzheimer's Disease is currently preventable or curable can divert badly needed attention and research from actually solving the mystery. This is irresponsible and are the tactics of a snake oil salesman.
If she can prove her claims (that the pathology of ALZ is preventable or curable) there is a Noble prize waiting for her.

Until then there are a lot of victims and their families who need real help not half truths.

@m- Thanks for your comment, I probably had recently got my L.T. & was recently researching alz.dementia,memory etc. A dr. had noted Dementia-with a ? mark behind it, after researching dementia had 10 types, I thought I had 1 type, since then I think I have type- T.B.I. with too many beers,with more researching-might not even be dementia- Anyways THANKS m-mman !! !

Since it is 100% unpreventable and incurable what exactly do you have to lose by trying? My friend has FTD which makes Alzheimer's look laughable since the worst characteristics of Alzheimer's comes first and there isn't one single drug. But she has decided to do what she can with what she has. She walks everyday, she reads, she does word searches, she listens to classical music, and we constantly challenge and trigger her memory. We know it is for certain we cannot win, we just simply plan to dispute the loss.

@K – Thanks 4 your input on taking a lot of these discovery's,their not discoverys to most people,but me.I have dementia-stage 1 & willing to learn as much as I can about delaying further stages or alz. 100 tips sounds good 2 me, or would u consider it a scam, to get a few bucks from people like me ?

If you have been diagnosed with Alzheimer's disease, skip it. Learn all you can about the disease. Get your family to learn abut the behaviors that you will soon exhibit then get your life and papers in order and spend some quality time with your family.

According to the 2013 Alzheimer’s Disease Facts and Figures report, genes are responsible for a mere 1% of Alzheimer’s cases. So if Alzheimer’s runs in your family, the overwhelmingly more critical factors are a shared environment and lifestyle.

Jean may mention this in the book, but it wasn't in the interview and is important. Restorative SLEEP is the third leg of a healthy lifestyle that also includes Nutrition and Exercise. Lots of good things happen while we sleep, including flushing out toxins that build up between brain cells. So open your eyes to the need to close them.

Funny. No research studies cited as proof these things "work" to prevent or cure Alzheimer's. None of the "scientists" who believe these theories are named. How do I know? Because I check facts and there are only conjectures in these types of articles. Preying on fear, uncertainty and doubt to sell advice books that, if followed, will not prevent or cure the disease is as old as the Pyramids. The only one who benefits is the author and their publisher.

Let me briefly tell you that there are multiple forms of dementia – alzheimer’s disease being the most common one that accounts for 40 to 75% of dementia cases and is the sixth leading cause of death in United States. Additionally, dementia and its types have common signs with some variations. Let’s start with the most common signs of dementia most commonly seen in patients at the early stages of the disease. They start experiencing subtle memory loss, mood instability such as immediate occurrences of maniac (laugh) and depression (sadness) episodes, and have trouble with listening and explaining things to other people, communicational obstructions to be exact. They also segregate their selves from social gatherings and unions, face difficulty in performing daily chores and also experience muscle impairment. Additionally, some people fail to converse with other people because they fail to keep up the pace and comparatively take longer to process the coming words and repeat the same question over and over again. Most of the cases showed that, dementia patients start segregating their selves and start living alone because they could not keep up with the lives of normal people. They just are not up for the adaptation to change. In one of the form of dementia, which is Lewy Body dementia, probable signs appear to be sleeplessness. Patients experience insomnia which leads to mood swings. It has been seen that they fail to keep tracks of roads and lose their tracking skills as well. In case of Alzheimer’s, a patient the most common signs are memory loss and forgetfulness. In some cases, it has been observed that people with Alzheimer’s segregate their selves from others. Additionally, they experience complete memory loss and trouble understanding visual images and spatial relationships, lack the judgement skill and a complete withdrawal from work or social activities. One most commonly observed is the forgetfulness and inability to retrace steps. There is another type of dementia called Parkinson’s characterized as uncontrollable movement of body parts such a shaking limbs and fingers. It has been observed that patients experience writing and speech changes, their ability to respond fails badly and they lose posture and balance. One of the common sign is bradykinesia characterized as slow body movement. One thing to keep in mind before labelling someone as a dementia patient is that forgetfulness and memory loss do no really mean a person has dementia because memory loss and forgetfulness are a normal parts of aging. But if any severity has been observed in these signs, a patient definitely requires a professional advice and consultation. There is no cookie approach to cure dementia but if you observe such changings or signs in your loved ones do not take it for granted before it gets too late.
Reference: http://bit.ly/2e5hYgU