Antipsychotics Up Risk of Stroke in People with Dementia 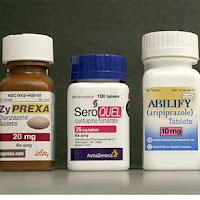 Dementia symptoms such as agitation, psychosis, anxiety, insomnia & depression are often treated with antipsychotic medication. Learn why these medications increase the risk of stroke.

Philadelphia, PA – Antipsychotic administration in the elderly is associated with an increased risk for cerebrovascular accident, more commonly known as stroke; a new study published in Biological Psychiatry provides additional insight into this important relationship.

Antipsychotics are prescribed to elderly patients to treat symptoms such as agitation, psychosis, anxiety, insomnia, and depression. The increased risk of stroke associated with these medications was identified approximately a decade ago and has since been replicated by subsequent studies. Although the increase in stroke risk is small, some guidelines discourage the prescription of antipsychotics to elderly patients.

To conduct the study, the researchers matched information from a large national database of insurance claims to what is known about the receptor binding profiles of the antipsychotic drugs.

“We found that antipsychotics with a high binding affinity of alpha2 adrenergic and M1 muscarinic receptors were associated with a greater risk of stroke than the use of other types of antipsychotics,” said Dr. Susan Shur-Fen Gau, Professor and Chair at National Taiwan University and corresponding author of the study.

They also found that this stroke risk was elevated in patients who were older and had dementia. Stroke risk was also related to duration and dosage of treatment, with patients who received either short duration of antipsychotic treatment (4 weeks or less) or higher daily doses of treatment showing an increased risk of stroke. This suggests that risk is highest in the initial weeks of antipsychotic treatment and for those with a higher average daily dose.

“Antipsychotics have a wide range of receptor profiles. The stroke risk profiles from this study suggest that it may be possible to use antipsychotics more safely in the elderly,” commented Dr. John Krystal, Editor of Biological Psychiatry.

Additional research is necessary, but the authors agree. They recommend that clinicians start antipsychotics at low dosages and closely monitoring for side effects in the initial treatment, particularly for individuals with older age and the presence of dementia.

John H. Krystal, M.D., is Chairman of the Department of Psychiatry at the Yale University School of Medicine and a research psychiatrist at the VA Connecticut Healthcare System. His disclosures of financial and conflicts of interests are available here.

About ElsevierElsevier is a world-leading provider of scientific, technical and medical information products and services. The company works in partnership with the global science and health communities to publish more than 2,000 journals, including The Lancet and Cell, and close to 20,000 book titles, including major reference works from Mosby and Saunders.