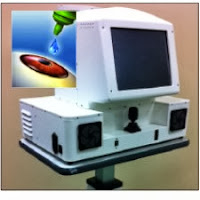 This simple eye test has the potential to change the way Alzheimer’s is detected and managed. Find out how this quick, easy-to-use, low cost & accurate technology for non-specialists will vastly improve the standard of care for people with Alzheimer’s.

ACTON, Mass.– Cognoptix announced the strong results of a multi-site clinical trial of its SAPPHIRE II eye test designed to identify Alzheimer’s disease patients via a beta-amyloid (Ab) signature in their eyes. By detecting a specific fluorescent signature of ligand-marked Ab in the supranucleus region of the human lens, SAPPHIRE II achieved a sensitivity of 85% and a specificity of 95% in differentiating 20 patients who were clinically diagnosed with probable Alzheimer’s Disease (AD) from a group of 20 age-matched healthy volunteers. These results validate the previous proof-of-concept clinical trial of the Cognoptix drug/device combination eye test. In addition, the SAPPHIRE II test showed excellent correlation to PET amyloid brain imaging.

“This simple SAPPHIRE eye test has the potential to change the way that Alzheimer’s disease is detected and managed,” said Carl Sadowsky, MD, FAAN, Medical Director, Premiere Research Institute, West Palm Beach, Fla., and a principal investigator in both the feasibility and pre-pivotal clinical trials of the SAPPHIRE eye test. “Today, only about 5% of patients in the United States are diagnosed by Alzheimer’s specialists, and the remainder are diagnosed by non-specialists. Therefore, providing a technology capable of improving the diagnostic sensitivity and specificity of AD for the non-specialist will vastly improve the standard of care for patients with AD.”

“These clinical results give us a great deal of hope that we will eventually be able to intervene early in the course of Alzheimer’s Disease, well ahead of the manifestation of symptoms,” said Maria C. Carrillo, Ph.D., Vice President, Medical and Scientific Relations, Alzheimer’s Association.

“No doubt, this clinical milestone represents a giant step forward in the development of an early-stage, non-invasive diagnostic test for Alzheimer’s Disease,” said Paul Hartung, President and CEO of Cognoptix. “The Cognoptix eye test is designed to be a simple but reliable system of early-stage diagnosis to allow treatment before significant neuronal loss and irreversible brain damage occurs.”

According to the Alzheimer’s Association, Alzheimer’s Disease is the sixth-leading cause of death in the United States: approximately 5.2 million persons are estimated to have AD and dementia, costing the U.S. more than $200 billion annually in medical and personal care expenses. Between 2000 and 2010, deaths from Alzheimer’s Disease increased 68%, while deaths from stroke, heart disease and breast cancer decreased by 42%, 23% and 2%, respectively, according to Data Decision Group.

About Cognoptix
Cognoptix, a privately held medical technology company headquartered in Acton, Mass., is focused on developing and commercializing an in-office, drug/device diagnostic system as an aid in the early detection of Alzheimer’s Disease (AD). Its investors include Inventages Venture Capital, one of the world’s largest life sciences-, nutrition- and wellness-focused venture capital firms; and Launchpad Venture Group, a Boston-based angel investment firm that provides funding to early-stage companies.