Players Are 19 Times as Likely to Develop Dementia 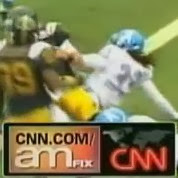 NFL researchers find that football players may end up with dementias such as CTE and Alzheimer’s NINETEEN TIMES more often than normal. “This is a big development,” says Dr. Bailes to CNN. “It is a game-changer!”

If you watch football, you have probably cheered some of those really hard hits. Take a look at this one from Sunday.

New York Jet Mark Sanchez got the “TD” against the Titans, but what about that HUGE blow, OWW, to the head there!

A new study commissioned by the NFL finds that players end up with Alzheimer’s and other brain disorders far more often than the rest of us do.

In fact, NINETEEN times more often for men between the ages of 30 and 49. Here to talk about this startling statistic is Dr. Julian Bailes. He is the former Team Doctor for the Pittsburgh Steelers. He is calling this study a ‘Game Changer’.

Dr. Bailes, it is good to talk to you this morning. The NFL has long said it doesn’t really have any empirical evidence to measure the amount of brain damage that some of its players are experiencing on the field.

Now it does. So the question is: ‘What next?’

Well, you will have to ask the NFL that. I am not sure. For years, they have denied the existence or possibility that multiple concussions or brain injuries could lead to problems later in life.

So this is a big development, a new development. It is very troublesome, but we have to decide how to move forward and how to make the game safer.

So what does this say about what these men are experiencing on the field?

Well, this was a survey research report. As you indicated, it stated that they have nineteen times more chance in their 30’s and 40’s, and five or six times higher chance after age 50, of having memory problems or a dementia such as Alzheimer’s. So it corroborates and confirms the research we and others have done several years ago that there is the potential for long-term brain effects from multiple concussions.

In fact, you presented similar data to an NFL meeting in 2007. You were met by eye-rolling in the crowd, some anger. You felt alienated at the time. Do you feel vindicated now?

I don’t want to say ‘vindicated.’ I think it is important that we continue the research and continue to try and figure this out.

The NFL has great physicians and great leadership. They need to decide what is the next step. As much as we can, we need to take the head out of the game and move this forward. We need to make the greatest sport in America, in my opinion, safer.

For the moment, at least, doctor, it seems as though the NFL’s next move is to do more research. They told us that for now, and here is a statement from them, quote:

“Our focus is on the proper prevention and treatment of concussions in our game. We do this through rule changes and enforcement, education of players, their families, coaches and team personnel, and insuring that our players have the best medical care available.”

So more research. But, because of this research that is out there now, these statistics and empirical evidence of what is going on in the brains of football players, is it incumbent upon them to address it in a way that involves doing more than just additional research? Should they actually be doing something practical?

Let’s see how they react to this. I think you are right. More research, more trying to figure this out.

I think we have identified the problem. I think it is a big deal. I think it has to be addressed now with rule changes and conservative management.

Remember that everything the NFL does is going to trickle down to younger athletes in high school and college, and even ‘Pee-Wee’ athletes.

I guess the big question, though, is that given what the game is and how it is played, what more can you really do?

The equipment has obviously improved over the years, but there are still limitations on the equipment. We have seen these high-tech helmets with sensors built into them, so the team physician has a clear idea, a pretty clear idea, at least, of what is going on in the head of some of these players when they get some hard hits. But unless you fundamentally change the game, what else can you do?

You’ve got to do a very good job of identifying concussions. You have to consider, maybe, rule changes to eliminate head-contact.

I even proposed something three years ago that was considered radical – take the head out of the game. Get lineman out of the three-point stance so they don’t have this mandatory, obligatory head-contact on every play.

Maybe one day genetic testing. Our research is showing there may be a certain group that is genetically predisposed to this sort of injury.

Wow. It certainly is an eye-open data set we have there. Thanks for being with us today, Dr. Bailes, and sharing your thoughts on it. I really appreciate it.

The professional and non professional MMA (Mixed Martial Arts) pratitioners are in higher risk to get dementias by CTE , once this violent "sport" can cause brain injuries.

The main problem is that there are young people, including teenagers , that are fighting MMA in their local schools/clubs , etc., most the times without the protection and the control that they need to do not get some severe non diagnosed brain injury.

Maybe, in 25 years ahead , we will see a "tsunami" of cases of CTE dementia, as sequelaes of brain injuries caused by MMA.

The health authorities should think about how to prevent it.