Amlodipine is Racing to be the 1st Vascular Dementia Treatment 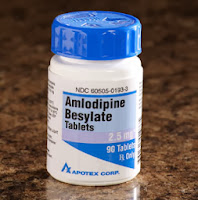 Amlodipine, an inexpensive drug approved for high blood pressure, could become the first ever treatment for vascular dementia. Vascular dementia is one of the most common forms of dementia. Find out how amlodipine can help.

The widely prescribed drug amlodipine has shown promising effects in people with vascular dementia, the most common type of dementia after Alzheimer’s disease. The Alzheimer’s Society and the British Heart Foundation (BHF) are running a major £2.25m (U.S. $ 3.8 million) clinical trial to test the drug’s effectiveness in people with the condition.
Experts based at the School of Medicine, Dentistry and Biomedical Sciences at Queen’s University Belfast are testing nearly 600 people with vascular dementia in a groundbreaking two year trial into the drug’s potential as a dementia treatment. The researchers, led by Professor Peter Passmore, hope to show that 10mg a day of the drug can significantly improve memory and cognitive health. As amlodipine is already licensed and known to be safe, the treatment – which costs the NHS just £1.07 (U.S. $ 1.80) a month – could be in use as a treatment within five to ten years.
Vascular dementia is caused by problems with the blood supply to the brain and affects about 150,000 people in the UK. Those with heart conditions, high cholesterol and diabetes are especially at risk, and it can be triggered by a stroke. There are currently no available treatments for vascular dementia yet there are fewer ongoing clinical trials for the condition than there are for hay fever.
Amlodipine is used to treat high blood pressure, a major risk factor for vascular dementia. It is known to enter the brain and researchers think it might work by protecting brain cells from damage when blood supply to the brain is poor.

Professor Peter Passmore at the School of Medicine, Dentistry and Biomedical Sciences, and lead investigator, said:

‘Vascular dementia is a very common disease and to date no major trial has been successful in developing an effective treatment for this disease. We hope, using evidence from previous research, and by trialling the drug amlodipine we may get a step closer to improving the outcomes of patients with vascular dementia in the next decade.’

‘It is scandalous that despite affecting 150,000 people there are no effective treatments for vascular dementia and very few new treatments under investigation. This groundbreaking trial could be the best hope we have to get an effective treatment in use in the next decade.
‘Developing new drugs from scratch can costs hundreds of millions and take up to twenty years but our flagship Drug Discovery programme aims to test existing drugs in people with dementia, fast-tracking the process and bringing new treatments to market faster and more cheaply.

‘The 2.3 million people living with coronary heart disease in the UK are at increased risk of developing vascular dementia. Unfortunately, as yet, there are no effective treatments for this devastating condition.
‘Amlodipine is a widely prescribed, blood pressure lowering treatment that has shown some promising effects in vascular dementia. The BHF and Alzheimer’s Society have joined forces to fund this definitive study. If positive, it would pave the way for an affordable treatment for vascular dementia in the near future.’

They don't do many trail or tests or funding for these problems because they affect mostly the elderly and they being mostly the government does not care and would just as soon we die so they don't have to pay out SS and medciare.

Karen Hunter I so agree the elderly no longer can vote therefore thr government don't care and it is a shame because these pple paved the way for us to be were we are today…I work with ALZ residents daily and they matter, they are my family and I care…God said to take care of the children, the poor, and the elderly…and if we don't do so God has a hot place for the so call government. THE POPE SAID IT SO GREAT WEEKS AGO…THOSE THAT SIT UP SO HIGH IN GOVERNMENT NOW WILL BE SITTING VERY LOW WHEN JESUS COME….MY RESIDENT PAID THEIR WAY IT'S OUR TIME TO CARE FOR THEM…GOD BLESS ALZ THEY ARE A GIFT!!!

As the post in this site of DECEMBER 5, 2013 with the title " Diagnosing Dementia: Alzheimer's May Really Be Mini-Strokes"
shows (as others articles in PubMed too) , the brain macro and microvascular disorders are one of the main triggers of the Late Onset Alzheimer disease (so called sporadic AD).

Then maybe , the amazing and hopeful trial led by Professor Peter Passmore with an unexpensive drug , can helps so patients with Late Onset AD too.

But be aware: Amlodipine it is an antihypertensive drug (to treat high blood pressure) , and when the patient is taking others drugs to treat high blood pressure (as diuretics, losartan, enalapril, betablockers as propanolol,atenolol,etc.), and when the patient is taking acetylcholinesterase inhibitors(as donepezil -Aricept,rivadstigmine -Razadyne,etc) , the association with amlodipine can leads to very low blood pressure (bellow 110X60 mmHg), and it can leads to hastens dementias ,and to heart attacks,strokes,etc.Then amlodipine can be prescribed only by the physician of the patient,starting with the lowest dose as possible,as 2.5 mg/day.

Dementia is not a proper disease, but it’s a combination of many diseases. The best medication of Dementia is proper medication with family support. Dementia has many types like Alzheimer's desease, Vascular dementia, Lewy bodies, Fronto Temporal, korsakoff syndrome, CJD. To know more about each type, Please visithttp://bluebirdcare.ie/2013/12/12/dementia-cases-set-to-soar-in-the-us-by-2050/

Whenever my dad was on this he retained water and got congestive heart failure. It's not something you can be on long term.

Amlodipine shifts the water to peripheral tissues like lower limbs. It does not add the total water retained by the body on the other words it does not cause volume overload.

After doing a lot of online research, I asked my cardiologist to prescribe a Calcium Channel Blocker and also specifically asked for an OK to discontinue taking Atenolol since they somehow work at cross purposes. This is subjective, of course, but I do think that my memory has improved and I'm able to focus better thanks to the Amlodipine.

wpDiscuz
8
0
Would love your thoughts, please comment.x
()
x
| Reply
News to Get at the Truth