FDA-Approved riluzole improved communication between neurons in the brain’s hippocampus. So
Rockefeller University researchers are conducting a clinical trial to test the effectiveness of riluzole for patients with mild Alzheimer’s. Learn more about riluzole and memory.

Forgetfulness, it turns out, is all in the head. Scientists have shown that fading memory and clouding judgment, the type that comes with advancing age, show up as lost and altered connections between neurons in the brain. But new experiments suggest an existing drug, known as riluzole and already on the market as a treatment for ALS, may help prevent these changes.

Researchers at The Rockefeller University and The Icahn School of Medicine at Mount Sinai found they could stop normal, age-related memory loss in rats by treating them with riluzole. This treatment, they found, prompted changes known to improve connections, and as a result, communication, between certain neurons within the brain’s hippocampus. 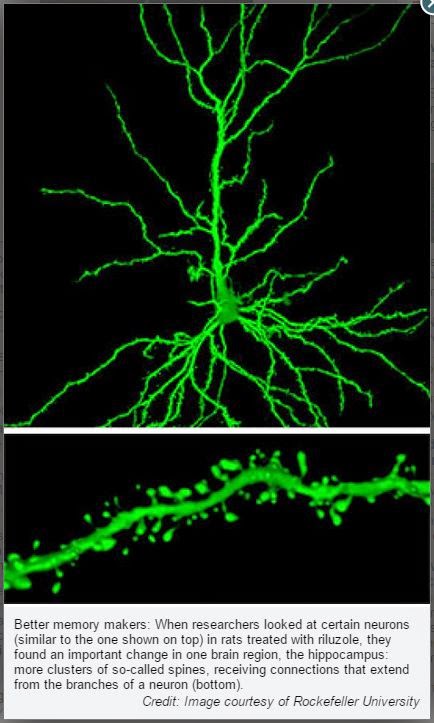 “By examining the neurological changes that occurred after riluzole treatment, we discovered one way in which the brain’s ability to reorganize itself — its neuroplasticity — can be marshaled to protect it against some of the deterioration that can accompany old age, at least in rodents,” says co-senior study author Alfred E. Mirsky Professor Bruce McEwen, head of the Harold and Margaret Milliken Hatch Laboratory of Neuroendocrinology. The research is published this week in Proceedings of the National Academy of Sciences.

Neurons connect to one another to form circuits connecting certain parts of the brain, and they communicate using a chemical signal known as glutamate. But too much glutamate can cause damage; excess can spill out and excite connecting neurons in the wrong spot. In the case of age-related cognitive decline, this process damages neurons at the points where they connect — their synapses. In neurodegenerative disorders, such as Alzheimer’s disease, this contributes to the death of neurons.

Used to slow the progress of another neurodegenerative condition, ALS (also known as Lou Gehrig’s disease), riluzole was an obvious choice as a potential treatment, because it works by helping to control glutamate release and uptake, preventing harmful spillover. The researchers began giving riluzole to rats once they reached 10 months old, the rat equivalent of middle age, when their cognitive decline typically begins.

After 17 weeks of treatment, the researchers tested the rats’ spatial memory — the type of memory most readily studied in animals — and found they performed better than their untreated peers, and almost as well as young rats. For instance, when placed in a maze they had already explored, the treated rats recognized an unfamiliar arm as such and spent more time investigating it.

When the researchers looked inside the brains of riluzole-treated rats, they found telling changes to the vulnerable glutamate sensing circuitry within the hippocampus, a brain region implicated in memory and emotion.

“We have found that in many cases, aging involves synaptic changes that decrease synaptic strength, the plasticity of synapses, or both,” said John Morrison, professor of neuroscience and the Friedman Brain Institute and dean of basic sciences and the Graduate School of Biomedical Sciences at Mount Sinai. “The fact that riluzole increased the clustering of only the thin, most plastic spines, suggests that its enhancement of memory results from both an increase in synaptic strength and synaptic plasticity, which might explain its therapeutic effectiveness.”

In this case, the clusters involved thin spines, a rapidly adaptable type of spine. The riluzole-treated animals had more clustering than the young animals and their untreated peers, who had the least. This discovery led the researchers to speculate that, in general, the aged brain may compensate by increasing clustering. Riluzole appears to enhance this mechanism.

“In our study, this phenomenon of clustering proved to be the core underlying mechanism that prevented age-related cognitive decline. By compensating the deleterious changes in glutamate levels with aging and Alzheimer’s disease and promoting important neuroplastic changes in the brain, such as clustering of spines, riluzole may prevent cognitive decline,” says first author Ana Pereira, an instructor in clinical investigation in McEwen’s laboratory.

Taking advantage of the overlap of neural circuits vulnerable to age-related cognitive decline and Alzheimer’s disease, Pereira is currently conducting a clinical trial to test the effectiveness of riluzole for patients with mild Alzheimer’s.

There are hundreds of scientific research articles that we can find in Google and in the site PubMed , about the neuroproctetive effects of the nutraceutical supplement ACETYL L CARNITINE ( so called ALCAR and ALC) in very small doses can works as a Support therapy in diffferent types of neurodegenerative diseases , as AD, PD,ALS , stroke sequelae ,etc.
For example ,we can find the article bellow, that shows that the association of doses of the nutraceutical ACETYL L CARNITINE (ALC) to the medicine drug described above , the Riluzole, in the treatment of ALS , can gives the DOUBLE OF MEDIAN SURVIVAL TO ALS PATIENTS. ARTICLE : "RANDOMIZED DOUBLE-BLIND PLACEBO-CONTROLLED TRIAL OF ACETYL-L-CARNITINE FOR ALS" (author : Professor Beghi and colleagues , from the Department of Neuroscience, Istituto di Ricerche Farmacologiche Mario Negri, Milan,Italy,published in the journal "Amyotrophic Lateral Sclerosis and Frontotemporal Degeneration.",2013,Sep. Where we can read :" Our objective was to assess the effects of Acetyl-L-Carnitine (ALC) with riluzole on disability and mortality of amyotrophic lateral sclerosis (ALS). Definite/probable ALS patients, 40-70 years of age, duration 6-24 months, self-sufficient (i.e. able to swallow, cut food/handle utensils, and walk). ALC or placebo 3 g/day was added to riluzole 100 mg/day. And we can read in the conclusion that: " The Median survival was 45 months with the (Riluzole associated to Acetyl L Carnitine (ALC) and 22 months (Riluzole associated to placebo)" We can see that associating the Acetyl L Carnitine (ALCAR) to the specific drug to ALS , the Riluzole , the patients survived more than the double of the time of patients that took Riluzole associated to a placebo. (45 months of survival with Riluzole associated to ALCAR versus 22 months of survival with Riluzole associated to placebo).

Continuing : If a so old and primitive nutraceutical supplement, that in it primitive for of Acetyl L Carnitine was synthesized more than 50 years ago, can gives so amazing results as a support therapy in different types of neurodegenerative diseases, including AD,PD,ALS ,etc. , if researchers used, for example, 1/100.000 of the billions of dollars of the grants that have been wasted in the lasts 30 years with flawed hypothesis of AD (as the betamyloid hypothesis), the researchers could use the ALCAR as a biochemical and pharmacological basis to develops powerful drugs, with the same mechanisms of action of the ALCAR, but with a higher effectiviness , that can gives more stable results,than the primitive ALCAR (ALC). Once more,it is a question of Will, and a question of researchers to open their minds, and to realize that they will Not get lots of money with a powerful derivative of ALCAR, but they will save and/or gives a better quality of life to millions of persons around the world, that suffer from that awful neurodegenerative diseases.