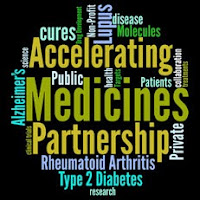 The Accelerating Medicines Partnership (AMP) is a bold new venture among the National Institutes of Health (NIH), 10 biopharmaceutical companies, and several nonprofit organizations. Find out what it will do to transform the rapid development of new Alzheimer’s drugs.

The Accelerating Medicines Partnership (AMP) is a bold new venture among the National Institutes of Health (NIH), 10 biopharmaceutical companies, and several nonprofit organizations

The goal is to transform the current model for developing new diagnostics and treatments by jointly identifying and validating promising biological targets of disease. This precompetitive collaboration harnesses collective capabilities, scale, and resources across multiple sectors to improve therapeutic development efforts for complex diseases.

AMP’s goal is to understand such diseases more fully through research to identify and validate novel, clinically relevant therapeutic targets. As a result, it is expected to accelerate the process of bringing new medicines to patients.

This multi-sector partnership is managed by the Foundation for the NIH (FNIH). NIH and industry partners are sharing expertise and resources—more than $230 million of combined funding support and in-kind contributions over 5 years—in an integrated governance structure that enables the best-informed scientific contributions from all participants. A critical component of the partnership is making AMP data publicly accessible for use by the broad research community.

Dementia, of which Alzheimer’s disease is the most common form, is estimated to affect 36 million people worldwide. This number is expected to rise to 115 million by 2050 unless an effective therapeutic is developed. The financial toll of dementia is already staggering: In the U.S. alone, the costs of caring for people over age 70 with dementia were estimated to be as high as $215 billion in 2010.

Despite a substantial R&D investment for Alzheimer’s disease and advances in our understanding of the disease pathogenesis, safe and effective treatments are still lacking. This reflects the need for a change in how the academic, biopharmaceutical, and government sectors that participate in Alzheimer’s disease research and therapy development generate, share, and use knowledge to propel development of critically needed therapies. It is becoming apparent that real progress in developing effective therapies will require transforming the Alzheimer’s research and drug development process into one that is participatory, collaborative, well-integrated, and iterative.

The AMP-AD program is a precompetitive partnership among government, industry, and nonprofit organizations that focuses on discovering novel, clinically relevant therapeutic targets and on developing biomarkers to help validate existing therapeutic targets. This multisector partnership is managed by the Foundation for the NIH. The combined funding support for this 5-year endeavor is $92.5 million dollars.

While technological advances have produced a wealth of data on the biological cause of disease, moving these discoveries into treatments has been far more difficult. Not all biological insights lead to effective drug targets, and choosing the wrong target can result in failures late in the drug development process, costing time, money, and ultimately, lives. Developing a new drug — from early discovery through Food and Drug Administration (FDA) approval — takes well over a decade and has a failure rate of more than 95 percent. As a consequence, each success costs more than $1 billion. The most expensive failures happen in late phase clinical trials, with a lack of drug efficacy currently estimated as responsible for 59 percent of Phase II failures and 52 percent of Phase III failures. Therefore, it’s essential to do a better job of pinpointing the right biological targets early in the process.

The entire biomedical research community and the public have a shared interest in compressing the timelines, reducing the costs, and increasing the success rates of new targeted therapies. Given the amount and complexity of the data, this goal will require a systematic approach in which government, academia, industry, and patient groups work collaboratively to sift through the flood of disease targets and find the ones most likely to prove responsive to treatments.

By optimizing the process for identifying and validating clinically relevant disease targets for drug design, AMP aims to:

Increase the number and effectiveness of new targeted therapies: