In Alzheimer’s, Plaque is the Cargo, Tau is the Driver 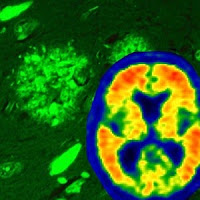 For 25 years, researchers tried curing Alzheimer’s by clearing amyloid plaque. While plaque is a problem, is it merely Alzheimer’s cargo, while tau is really Alzheimer’s driving force? See how Mayo Clinic’s tau study may change our world’s focus in the search for a cure.

JACKSONVILLE, Fla. — By examining more than 3,600 postmortem brains, researchers at Mayo Clinic’s campuses in Jacksonville, Florida, and Rochester, Minnesota, have found that the progression of dysfunctional tau protein drives the cognitive decline and memory loss seen in Alzheimer’s disease. Amyloid, the other toxic protein that characterizes Alzheimer’s, builds up as dementia progresses, but is not the primary culprit, they say.

The findings, published in Brain, offer new and valuable information in the long and ongoing debate about the relative contribution of amyloid and tau to the development and progression of cognitive dysfunction in Alzheimer’s, says the study’s lead author, Melissa Murray, Ph.D., a neuroscientist at Mayo Clinic in Jacksonville.

The findings also suggest that halting toxic tau should be a new focus for Alzheimer’s treatment, the researchers say.

But researchers at Mayo Clinic were able to simultaneously look at the evolution of amyloid and tau using neuropathologic measures. “Imagine looking at the rings of a tree — you can identify patterns, like the changing seasons and the aging of the tree, when viewing the tree’s cross-section,” Dr. Murray says. “Studying brains at different stages of Alzheimer’s gives us a perspective of the cognitive impact of a wide range of both amyloid and tau severity, and we were very fortunate to have the resource of the Mayo brain bank, in which thousands of people donated their postmortem brains, that have allowed us to understand the changes in tau and amyloid that occur over time.”

Alzheimer’s disease brain pathology is illustrated using thioflavin-S fluorescent microscopy, which reveals both neurofibrillary tangles (flame-shaped structures) and amyloid plaque pathology (rounded structures). Through the use of the amyloid brain scanning, we are now able to visualize amyloid accumulation in the brains of living individuals – visualized with warmer colors.

“Tau can be compared to railroad ties that stabilize a train track that brain cells use to transport food, messages and other vital cargo throughout neurons,” Dr. Murray says. “In Alzheimer’s, changes in the tau protein cause the tracks to become unstable in neurons of the hippocampus, the center of memory. The abnormal tau builds up in neurons, which eventually leads to the death of these neurons. Evidence suggests that abnormal tau then spreads from cell to cell, disseminating pathological tau in the brain’s cortex. The cortex is the outer part of the brain that is involved in higher levels of thinking, planning, behavior and attention — mirroring later behavioral changes in Alzheimer’s patients.”

“Amyloid, on the other hand, starts accumulating in the outer parts of the cortex and then spreads down to the hippocampus and eventually to other areas,” she says. “Our study shows that the accumulation of amyloid has a strong relationship with a decline in cognition. When you account for the severity of tau pathology, however, the relationship between amyloid and cognition disappears — which indicates tau is the driver of Alzheimer’s,” Dr. Murray says.

Amyloid brain scanning has been used for only about a decade, and “so there are still many unanswered questions about what it is measuring,” she adds. “Investigating what brain pathology underlies the amyloid brain scanning threshold indicative of Alzheimer’s can only be addressed in patients who underwent scanning and donated their brain for research.”

The study was conducted in two parts. Researchers at Mayo Clinic in Florida examined 3,618 brains in its postmortem brain bank, of which 1,375 brains were Alzheimer’s confirmed. These patients died at different ages and different stages of dementia, providing a valuable timeline into disease progression.

The researchers used recommended scoring systems to examine the evolution of amyloid and tau in dissected brain tissue. They found that the severity of tau, but not amyloid, predicted age onset of cognitive decline, disease duration and mental deterioration.

The second part of the study was conducted with their collaborators at Mayo Clinic in Rochester. Together the team examined amyloid brain scans taken of patients prior to death and compared the scans to measures of tau and amyloid brain pathology.

The investigators found that the signal from amyloid brain scans corresponded with amyloid pathology specific to the brain and not amyloid found in vessels, and did not correspond to tau pathology. The brains of some participants had amyloid visible at pathology that did not reach the threshold for what would be found in Alzheimer’s brain scans. This is important, as amyloid can be found in brains of older individuals who have not experienced cognitive decline, researchers say.

“Our findings highlight the need to focus on tau for therapeutics, but it also still indicates that the current method of amyloid brain scanning offers valid insights into tracking Alzheimer’s,” Dr. Murray says. “Although tau wins the ‘bad guy’ award from our study’s  findings, it is also true that amyloid brain scanning can be used to ensure patients enrolling for clinical trials meet an amyloid threshold consistent with Alzheimer’s — in lieu of a marker for tau.”

Mayo Clinic
Mayo Clinic is a nonprofit organization committed to medical research and education, and providing expert, whole-person care to everyone who needs healing. For more information, visit mayoclinic.com .

PrevPrevious“For the first time I think we have a chance to really change the course of Alzheimer’s.”
NextThought of the Week: Perseverance & SpiritNext
Subscribe
Login
0 Comments
Inline Feedbacks
View all comments