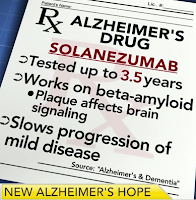 Excitement and Hope are 2 words not often heard in Alzheimer’s clinical trials, but new results for solanezumab are generating quite a bit of both. Learn more.

Showing that an investigational treatment has slowed the progression of a degenerative brain disease like Alzheimer’s is extremely challenging. Researchers have proposed overcoming this problem with a type of study called a “delayed-start” trial.

In delayed-start studies, patients are randomly assigned to start active treatment at the beginning of the study or are placed in a “delayed-start” group that receives a placebo treatment for a period of time before being given the active experimental therapy. Researchers then compare the two groups at a later, pre-defined point in time to assess their response to the treatment.

“We are particularly excited about these data because this is the first time the delayed-start methodology has been implemented for an Alzheimer’s disease clinical trial,” said Hong Liu-Seifert, Ph.D., study research advisor at Eli Lilly and Company. “This new analytical method enabled us to assess if solanezumab had an effect that is consistent with slowing progression of disease by modifying the underlying disease progression, which, up until now, has not been studied.

• If the experimental treatment is limited to reducing Alzheimer’s symptoms, both early-start and delayed-start participants should experience the same benefit. For example, if a treatment is maximally effective after two months, it would take both groups two months from the time they first receive it to have comparable reductions in their symptoms, and the delayed start group would “catch up” to the early start group and be functioning at a similar level.

Results were based on a pooled analysis of 1,322 people enrolled in the completed, 18- month EXPEDITION (EXP) and EXPEDITION2 (EXP2) placebo-controlled clinical trials, and a twoyear extension trial known as EXPEDITION-EXT (EXP-EXT). EXP and EXP2 did not achieve statistical significance on their primary endpoints.

In EXP-EXT, all participants receive solanezumab, but patients and site personnel remain blinded to original treatment assignment, preserving the randomized, double-blind nature of the entire 3.5-year delayed-start design. The primary time point assessment for the delayed-start analyses was pre-specified at 28 weeks into the delayed-start period.

The researchers found that:

• Treatment differences at 28 weeks in EXP-EXT between the early start and delayed start groups for cognition (ADAS-Cog14) and function (ADCS-iADL) were similar to differences at the end of the placebo-controlled period, within a pre-defined margin. In other words, the delayed starters did not “catch up.”

• Treatment differences between the early start and delayed start groups for ADAS-Cog14 and ADCSiADL remained significant through 52 weeks.

“The results support the potential benefit of starting treatment with solanezumab earlier rather than later in disease progression, and suggest there is persistence of treatment effect even after the delayed-start patients are given the drug,” Aisen said. “This analysis method is also planned for the ongoing EXPEDITION3 study.”

Simultaneously with presentation at AAIC 2015, results from the delayed-start analysis of solanezumab in mild Alzheimer’s will be published in Alzheimer’s & Dementia: Translational Research & Clinical Investigations

PrevPreviousAnesthesia is a Higher Dementia Threat to Women
NextThought of the Week: Peace of MindNext
Subscribe
Login
2 Comments
Inline Feedbacks
View all comments

As we can see in the article published in the British Medical Journal , about the "breaktrough"(or a smart marketing try?) about the Failed drug solanezumab (that has fail over fail in ALL trials with such drug). Solanezumab as others "zumabs", are based in falacious and flawed betamyloid hypothesis.

But searching in Google , we can find the well fundamented text of the doctor McCartney , where she concluded about the marketing media release of the Lilly pharma company with all it "noise" about the failed solanezumab : "This is no breakthrough. How did this paper score such extraordinary publicity?'

We can find the article of the British Medical Journal , searching in Google with the words of the title of the article :

Margaret McCartney: The “breakthrough” drug that’s not been shown to help in Alzheimer’s disease

Nice knowledge gaining article. This post is really the best on this valuable topic. rehabs