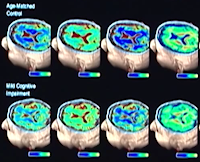 Early-onset Alzheimer’s disease occurs in people age 30 to 60 and represents less than 5 percent of all people with Alzheimer’s. Most cases are caused by an inherited change in one of three genes, resulting in a typle known as early-onset familial Alzheimer’s disease, or FAD. For others, the disease appears to develop without any specific, known cause.

A child whose biological mother or father carries a genetic mutation for early-onset FAD has a 50/50 chance of inheriting that mutation. If the mutation is in fact inherited, the child has a very strong probability of developing early-onset FAD.

Each of these mutations plays a role in the breakdown of APP, a protein whose precise function is not yet fully understood. This breakdown is part of a process that generates harmful forms of amyloid plaques, a hallmark of the disease.

Critical research findings about early-onset Alzheimer’s have helped identify key steps in the formation of brain abnormalities typical of the more common late-onset form of Alzheimer’s. Genetics studies have helped explain why the disease develops in people at various ages. 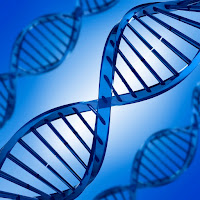 NIA-supported scientists are continuing research into early-onset disease through the Dominantly Inherited Alzheimer Network (DIAN), an international partnership to study families with early-onset FAD. By observing the Alzheimer’s-related brain changes that occur in these families long beforesymptoms of memory loss or cognitive issues appear, scientists hope to gain insight into how and why the disease develops in both its early- and late-onset forms.

In addition, an NIA-supported clinical trial in Colombia, South America, is testing the effectiveness of an amyloid-clearing drug in symptom-free volunteers at high risk of developing early-onset FAD.