New Burst of Interest: Is Alzheimer’s an Infection? 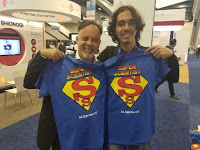 There’s a new wave of Alzheimer’s interest rising in the infectious diseases community. Perhaps it’s because the cause-and-cure for Alzheimer’s remain mysteries, despite decades and billions of dollars of plaque-and-tau research. Learn what’s firing up the focus on infectious agents as the new Alzheimer’s targets.

Dr. Norins based his conclusion on conversations with attendees and the number of copies of his White Paper “It’s Time to Find the Alzheimer’s Germ” which were taken by attendees at the conference, the leading annual gathering of clinicians and researchers who focus on infectious diseases. “Many also told us they had privately noticed similarities between Alzheimer’s and various less-common infections, but there had been no channels through which to express this growing awareness.”

He explained that evidence for infectious triggers of Alzheimer’s has been published over the years but this possibility has been largely ignored by research funders in government and advocacy groups. They instead favored studies of the amyloid plaques and tau tangles which are prevalent in Alzheimer’s brains.

“Day versus night,” was how Dr. Norins compares the IDweek interest to that he observed at the “AAIC” Alzheimer’s conference in Chicago a few weeks earlier. He attributed this difference to the fact that while existing “ALZ” researchers are well versed in neurology and neuroscience, few are expert in the clinical and lab aspects of infectious diseases.

He says there’s a new wave of Alzheimer’s interest rising in the infectious diseases community, especially since after decades of research and billions of dollars spent on amyloid plaques and tau the root cause of the killer disease remains a mystery and there is still no drug to cure it.

The Foundation of the Infectious Diseases Society of America is currently offering two grants for research on infectious causation of Alzheimer’s, funded by Alzheimer’s Germ Quest.