A Big Step in Treating Wandering in Dementia 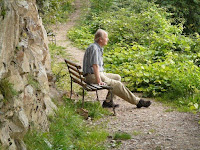 Wandering is a common and often dangerous symptom to contend with. 60% of people with dementia wander off at some point. Although it has long been a mystery, Japanese researchers have tracked down the cause of this behavior. Find out more.

Alzheimer’s disease is one of the most serious diseases in an aging society, yet the cause is often unclear and there is no appropriate treatment method. Many patients with Alzheimer’s disease develop spatial memory impairment which causes symptoms such as wandering, putting a great stress on caregivers. However, the cause of spatial memory impairment has been long unclear.

A research group led by Kei Igarashi, an assistant professor at University of California, Irvine elucidated the brain circuit mechanism that causes spatial memory impairment in Alzheimer’s disease. The research group used Alzheimer’s disease model mice developed at RIKEN in 2014 and analyzed the brain activity of mice performing memory behaviors using an electrophysiological technique(1). The results showed that brain function to distinguish different locations called as “remapping”(2), a function of the hippocampus(3) of healthy brain, become impaired. The results also showed that this hippocampal dysfunction was caused by decreased activity in the brain region called the entorhinal cortex(4).

The study was conducted jointly with Takaomi Saido, a team leader at the RIKEN and Professor Takashi Saito at Nagoya City University, as part of the JST Strategic Basic Research Programs.

This is a method for directly measuring electrical signals using metal electrodes for recording brain activity.

The memory center of the brain. The hippocampus, the Greek word for seahorse, is so named because it has a shape similar to that of a seahorse. It has special electric circuits to store and recall memory information. When the hippocampus is damaged, memory impairment occurs.