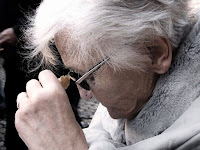 Amyloid beta proteins can take on different formations when they group together, cauing neronal cell damage and inflamation. But it’s only one part of a much larger, complex story. Learn more about amyloid beta and its part in the Alzheimer’s picture.

More than six million Americans are currently living with Alzheimer’s disease, and it is predicted that this number will rise to over 13 million by 2060. In addition, many people have other forms of dementia such as Lewy body, frontotemporal, and vascular cognitive impairment. Continued and expanded research on these devastating diseases is a National Institutes of Health top priority.

Amyloid beta protein (Aβ), which has long been investigated for its possible role in Alzheimer’s and related dementias, is a small piece of a larger, naturally occurring molecule called the amyloid precursor protein (APP).

When amyloid abnormally accumulates in Alzheimer’s, thousands of the Aβ molecules arrange themselves into strands known as “fibrils.”

Although the precise mechanisms through which APP/Aβ might lead to Alzheimer’s and other dementias are not completely understood, various studies over the past two decades have investigated the potentially damaging role of different formations that Aβ molecules can take when they group together. For example, the fibrils can cause neuronal cell damage and inflammation.

In the late 1990s and early 2000s, a new concept emerged that the development of smaller collections of Aβ called “oligomers” might also contribute to the cellular damage seen in the brains of people who had Alzheimer’s.

Data from different laboratories have shown that these damaging protein collections can consist of as few as two Aβ molecules coming together, or as many as dozens.

Among the oligomers identified is one called Aβ*56. While this finding caused some initial interest, it resulted in a limited line of subsequent research because of the lack of specific markers to detect it in laboratories and the inability to reproduce the initial findings.

It is notable that the Aβ*56 oligomer was one of many being explored at the time, and no Alzheimer’s biomarker or experimental therapy based on Aβ*56 has since been developed.

Instead, immunotherapies targeting Aβ monomers (a single “unit” of Aβ), other types of oligomers, and the longer amyloid fibrils have been the focus of studies on potential drugs to effectively treat dementia.

Despite the data from some recent clinical trials on amyloid-directed antibodies, there is still a strong scientific rationale for continuing to explore approaches that target different aspects and collections of the amyloid protein.

Scientists know that some people with rare inherited forms of the disease have variations in the APP gene in the area of Aβ. Research has also shown that other gene variants that lead to inherited Alzheimer’s play a role in the production of Aβ.

Moreover, individuals with Down Syndrome bear an extra copy of the APP gene and are at increased risk for developing Alzheimer’s after the age of 40. And, in non-inherited types of Alzheimer’s, many of the genes that increase the susceptibility to this disease have been shown to alter the breakdown and clearance of the Aβ protein.

Current thinking is that Aβ oligomers (the smaller collections of Aβ proteins) are among the most toxic types affecting neurons. However, it also appears that there is not a single culprit among them. Thus, additional investigations are needed to better understand the structure, stability, and mechanisms by which they cause damage to neurons.

In recent years, Alzheimer’s has been recognized as a complex disorder that involves many other cellular changes in addition to the accumulation of Aβ.

Other proteins such as tau, TDP43, and alpha-synuclein also accumulate in the brain; and inflammation, genetics, environmental factors, and changes to the vascular system are factors as well.

The NIH National Institute on Aging (NIA) supports a wide range of studies designed to investigate the causes of Alzheimer’s that include genetics and environmental studies (e.g., infectious agents and pollutants) as well as the involvement of inflammation, fat droplets, the vascular system, the cellular “garbage disposal systems” in our brains, and much more.

Five of the eight NIA-funded late-phase clinical trials relevant to Alzheimer’s are focused on amyloid, in contrast to only 13 of 61 early phase trials. These data help underscore the current progressive diversity of the approaches being pursued and the breadth of the Institute’s investments.