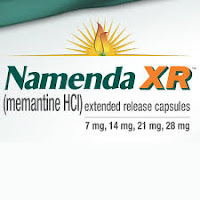 Namenda is the most widely prescribed medication for mid-stage Alzheimer’s. Some of our readers have had trouble filling their Namenda prescriptions. Here’s the latest update on the “what-and-why”. Please share your experiences in the comments section.

High demand for slow-release Namenda-XR is causing a shortage of the drug.

The shortage was caused by a successful promotional campaign by the drug’s manufacturer, Actavis Plc.

The campaign encouraged people to switch from regular 5-milligram and 10-milligram doses of Namenda to the new, slow-release version, Namenda-XR.

Actavis’s patents for the 5-milligram and 10-milligram doses of Namenda expire in October 2015 and some generic drug manufacturers can start selling competitor products three months before that. On the other hand, the latest patent on Namenda-XR, the slow-release version of the Alzheimer’s pill, extends through September 2029. Actavis already sells over a billion dollars a year of Namenda.

Many people have connected the dots in a negative pattern. They claim that Actavis is acting recklessly to hold on to its marketshare of people using brand-name Namenda. By pushing hard for people to get used to asking for Namenda-XR now, even though there is not enough around, Actavis may keep many people from switching to the less expensive generic version called "Memantine". Generic Memantine should start rolling out from other manufacturers in the weeks ahead, offering substantial savings.

Actavis extended its schedule for discontinuing the 5-mg and 10-mg doses of Namenda until the end of the year, from initial plans to stop selling the drug in August, as a result of these supply issues with the slow-release pill.

“We’re working as fast as we can to fix supply for the XR version,” said David Belian, an Actavis spokesman, referring to the extended-release version of Namenda. He declined to provide details about when Actavis can rectify the Namenda-XR supply shortage.

In the meantime my dad has only 2 pills of Namenda left & no one can fill his prescription. What affect will that have on him?

Nettie, See if pharmacy may have a few on the shelf. Mothers reaction to missing a single dose was noticeable. She was confused more than usual and her memory was affected. She seemed to regress and then after a day or so she seemed better.

I'm glad to hear that the deadline for stopping the sale of regular Namenda has been extended until the end of the year. I take it for Mild Cognitive Impairment and it's helped me so much! I tried the XR version and cannot tolerate the dizzy side effect it gives me, so was wondering what I'd do until generic forms of Namenda arrive on the market next year. I'm still working as a psychologist and need my memory!!!

This is PR baloney from the manufacturer. Walmart, Walgreens, CVS, Rite Aid, Target, Giant, Safeway can NOT get Namenda (XR or IR) in stock, and their suppliers tell them they have NO DATE when either version will be available.
Have been able to find some of the older IR version available at a few pharmacies, and the XR version is apparently being doled out at the rate of one 30 day supply per pharmacy (according to the Walgreens that had one bottle available) per month. Forest Labs claims they have not discontinued the manufacture of IR (old) Namenda, but suppliers and pharmacies are not able to get any supplies.
WUSA 9 CBS News did a story about the apparent greed behind this maneuver by the manufacturer.
#neednamenda

Mother has been lucky to get 30 capsules. Three days after refill request was given 6 caps, 4 days later, after complaining, received 24 more. I've never been told that generic might be available TY

My father is already experiencing memory issues being on regular Namenda for just two days. Since the New York Attorney General has already filed suit gainst Forest Labs and Activis, we need to enjoin that suit for claims of harming our relatives by not having XR available. This is outrageous.