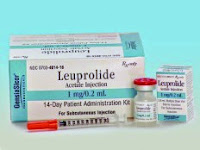 In Alzheimer’s trials, Leuprolide (an FDA approved cancer drug) stabilized memory loss for a full year. This is the first time any therapy has done that. Find out more.

Women with Alzheimer’s disease showed stable cognition for a year when a drug that is more commonly used to treat advanced prostate cancer was added to their drug regimen, according to a study from researchers at the University of Wisconsin-Madison.

Articles on FDA-Approved Cancer Drugs That Have a Positive Effect on Alzheimer’s:

“This is the first time any therapy has been shown to stabilize memory loss over a year,” says Dr. Craig Atwood, co-lead author of the study and associate professor of medicine at the UW School of Medicine and Public Health.

The study was published in the Journal of Alzheimer’s Disease and is available here:http://iospress.metapress.com/content/n207096671247200

In the meantime, one can only use this medication “Off-Label” for Alzheimer’s in the USA. “Off-label” means that an individual doctor can take responsibilty for this drug which is labeled for cancer and decide they want to use it on a patient “off-label” for Alzheimer’s. Only the doctor and the patient have any responsibility for the effects of the drug.

The clinical trial, initiated by Dr. Richard Bowen at the former Voyager Pharmaceutical Corporation, followed 109 women with mild to moderate Alzheimer’s disease. Some were treated with the drug leuprolide acetate (Lupron Depot), used to treat cancer in men and severe endometriosis in women, and with an acetylcholineesterase inhibitor such as Aricept, which improves mood in people with the condition but does little to slow memory loss. Others taking an acetylcholineesterase inhibitor received low-dose Lupron alone or a placebo.

How They Found It

Atwood explained that earlier epidemiological studies involving hundreds of thousands of patients had found that men who had prostate disease and were treated with Lupron had a 34 to 55 percent decreased risk of developing Alzheimer’s disease compared with prostate-cancer patients who didn’t receive the drug.

He explained that Lupron acts to suppress gonadotropin-releasing hormone (GnRH), which is produced in the brain and controls ovulation in women and in men. This in turn decreases the production of gonadotropins, hormones that regulate the synthesis of sex steroids like estrogen and testosterone.  For these reasons, it is also used to treat estrogen-sensitive breast cancer, endometriosis, and premature puberty. Decreasing GnRH and gonadotropins with Lupron prevents some of the negative effects of elevated GnRH and gonadotropins on the brain, which occurs following menopause.

Post-menopausal women were chosen for this study because they no longer produce sex steroids; men could have been affected by the loss of testosterone caused by the Lupron.

“This promising combination therapy (acetylcholineesterase inhibitors and Lupron Depot) warrants testing in early and late stages of Alzheimer’s disease,” Atwood says. “However, since the company that performed this study is now out of business, it remains to be seen whether this therapy will ever be tested in further clinical trials and reach the market.”

The Journal of Alzheimer’s Disease is an international multidisciplinary journal to facilitate progress in understanding the etiology, pathogenesis, epidemiology, genetics, behavior, treatment and psychology of Alzheimer’s disease. The journal publishes research reports, reviews, short communications, book reviews, and letters-to-the-editor. Groundbreaking research that has appeared in the journal includes novel therapeutic targets, mechanisms of disease and clinical trial outcomes. The Journal of Alzheimer’s Disease has an Impact Factor of 3.612 according to Thomson Reuters’ 2013 Journal Citation Reports. It is ranked #22 on the Index Copernicus Top 100 Journal List. The Journal is published by IOS Press.

Men frequently have prostatitis for quite a long time without experiencing symptoms or without realizing the signs are associated with prostatitis. Prostatitis is inflammation of the prostate gland. Affected person should take prostatitis treatment

My husband is being treated with lupron the second time for prostate cancer. He also has Alzheimer’s so I am hopeful the Lupron will help both things.